The hair on the back of her neck stood up when she heard the door close behind her. Before she even turned around, she knew who it was. It was always the same, he would come home, drunk, and then he would yell and scream about something or other that made him angry, and then he would beat her senseless. This time was no different.

Like always, she tried to slip into the other room, praying that he was so drunk he forgot about her. But she was barely around the corner when he caught sight of her.
“Come here!” he ordered in a drunken slur. She had no choice but to obey, or else her punishment would be ten times worse.
“What have you been doing all day?” he demanded to know.
“I was cleaning,” she said quietly, not looking him in the eye. He didn’t like that.
“Look at me when I am talking to you! Look at me!”
She looked up slowly, staring into his menacing eyes, a sight so fearful that her own began to fill with tears.
“Good. Now tell me. What have you been doing all day?”
“I was cleaning, I swear!” she cried, knowing that it was no use trying to convince him.
“You liar! You were cheating on me, weren’t you!?”
“No! No, please, you have to believe me, I wasn’t cheating!”
He grabbed her shoulder, gripping so tightly that she screamed in pain, which only made him grip harder.
“Let go of me, please!” she cried, despite the fact that she knew it was hopeless.
“Not until you tell me the truth!”
“I did! I swear, I didn’t lie!”
“What kind of idiot do you take me for?”
She didn’t answer. She didn’t know what else she could say. Which only made him angrier. He raised his free hand, and bought it down forcefully on her face. She screamed in pain, and he hit her again. And again, and again, and again.
She could feel herself losing consciousness. After one last blow, she fell to the floor, where he left her while he staggered to bed.
She woke up in the early hours of the morning. She did her best to stand up, moving slowly towards the kitchen, where she sat at the table. She tried to collect whatever memory of the past night, to try to remember when she blacked out this time. Sometime during this process, he walked in.
“Maureen, I’m so sorry about last night. I was drunk, I didn’t mean it.”
“That’s what you say every other morning, Michael,” she pointed out now that he was sober.
“But I mean it. I love you, Maureen, you know that. That’s why I married you.”
“I know, Michael, I know.”
She turned away from him, not able to look him in the eyes any longer. She heard him walking away. Then the sound of the front door opening and closing filled the house.
This was it. She could no longer live like this anymore, praying that he would change, but knowing all along that he never would. She ran into her bedroom, the one she never used, for fear of sleeping in the same room as her estranged alcoholic of a husband. She tore open the closet, where she had a small amount of space for her wardrobe. She grabbed everything and stuffed it into an old and worn out suitcase. Grabbing the little amount of jewelry she had, she threw that in there too.
Looking around outside to be sure that her husband was really gone for the day, she made a dash to her car. Throwing the suitcase in the passenger side, she climbed in and put the key in the ignition. Backing out slowly and carefully, she drove off.
With each passing second, she got farther and farther from the house that she had lived so long in, not that she way she was living should even be classified as living. As she got farther and farther away, she began to feel safer and more secure. She drove the twenty miles to her brother’s house, where she found refuge. The way they treated her when she got there, with so much love and kindness, almost brought her to tears. She had forgotten what that had felt like.
She was finally rid of him, the man that had turned her life into a living hell for the duration of their marriage. She felt a sense of freedom that she had never felt before. She finally would be able to return to a normal and safe life. And that was the greatest thing of all. 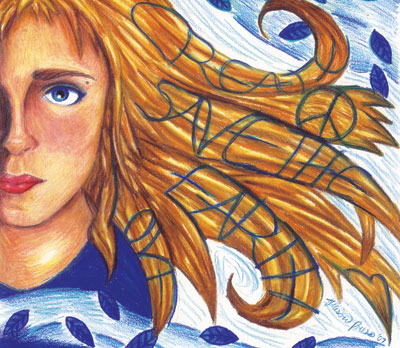