I slammed him against the lockers and the bang echoed. He grunted but didn’t fight back- I didn’t think he would. Coward. I put my hands on his shoulders and pushed, pinning him.

Gage glanced around desperately, like he was hoping someone would help him. It was forty minutes after school got out- there was, of course, nobody around. And who would want to help someone like him? He looked up at me- I’m about two inches taller, exactly as strong, and have a whole lot more attitude than him- and I saw something in his eyes. It was fear.

The answer was clearly yes, which was good. I wasn’t going to hurt him badly- just give him the worst scare he’s probably ever had.

“Did it ever occur to you,” I snarled, getting up a little closer to his pierced nose and blue mohawk, “that maybe other people can feel the exact same way as you? That maybe Emma was just this terrified? That maybe Nick was this scared of you? Did you ever think how much it hurt when you beat up Alex? And did you even consider the consequences when you absolutely humiliated Justin?”

His eyes flicked away from my face. “I- I didn’t mean…”

Like he had a choice. He darted a look at me and I held his gaze until he glanced away.

He started to nod, frantically, but then his eyes widened as he glanced at something to the side. I followed his gaze- and there was Justin, standing there, watching me deal with Gage.

I let off some of the pressure on Gage’s shoulders. “What does it look like I’m doing? I’m teaching Gage how he should treat others. Especially you.”

My little brother looked up at me nervously. “I- I didn’t ask you to.”

Afraid Gage would retaliate later? “No,” I admitted, “but it wasn’t hard to figure out what was going on. The lunchroom incident was pretty obvious.”

An idea struck me- I pulled Gage off the lockers and spun him around to face Justin, keeping a firm grip on his hands behind his back. “I want an apology. Now.”

He hesitated. I yanked one of his arms upward, just to the point where I made my intention clear but before I started hurting him. “Apologize.”

“I’m sorry,” he blurted, not looking my brother in the face. Justin watched carefully.

“You’ll leave him alone,” I snapped, and gave Gage a final shove. He tumbled onto the floor and I stepped over him. “Come on, Justin. Let’s go home.”

He trotted nervously after me as we went down the hall, leaving Gage sprawled on the tiles and scared to move. “Justin,” I said when we were out of earshot, “next time something like this happens I want you to tell me. No more of this ‘suffering in silence’ crap. Besides, odds are you’re not the only victim.”

“Okay,” he said, as I opened the door and stepped into the March afternoon. We headed towards my car in the parking lot. “Katie?”

I glanced at him- he had a slight smile. “Yeah?” 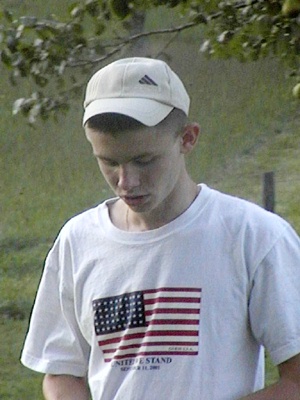 The author's comments:
I know they tell you not to deal with bullies this way, but I have younger siblings and sometimes get the urge...

This is an experiment in stuff that I don't usually do: I tend to steer away from realistic fiction. I also thought it would be interesting to try a main character with a different gender.
Post a comment
Submit your own

I loved the twist at the end, that it was a girl terrifying this big bully. Go feminism!

One thing: in the beginning, when you said "It was stupid to mess with my brother, Gage..." it was a tad confusing: for a little bit, I thought Gage was the name of the brother, so I was confused when you said Justin in the next line. Just a thought.

Honestly, I'm not really a fan of realistic fiction either. Usually all that comes to mind is romance, friendships and family problems so I'm glad this was a little different. I read your comments about the article beforehand, but I still envisioned a boy as the main character and was surprised when it was a girl named Katie at the end. The dialogue and flow was close to perfect, but it made it harder to imagine the main character as a girl. I'm not really sure what it is. I guess that could be kind of a twist.

That part sounded a bit wordy and longer than needed. I got the point but it felt like you were overdoing it and started to kind of lose my interest. The choice of words were a little cliche like something you'd see from a middle/high school drama but what other way is there to stop bullying, right?

Overall, I liked this a lot. It had a good feel to it. There's only so much you could write given a particular subject and you did a pretty good job with that. Short and sweet and straight to the point. Keep writing! :]