The boy, The girl, The Hamburger | Teen Ink

The boy, The girl, The Hamburger

I’m on the verge of tripping and I don’t know how to cope I feel like I’m not perfect enough for you it all started with working out a little more than usual then I “forgot” to eat a couple meals no big deal right? Yea that’s what they all think when they all start to lose control. But, I knew I was different that I could stop any time just once I was a little skinner although what I didn’t know was I never going to be satisfied ever. I knew it could kill me I could not of cared less it didn’t matter to me anymore nothing did except how I looked in all those clothes.
my friends started to question about it I just said oh I’m working out trying to get stronger for swimming I think they were fooled for a while always skeptical always giving me food I never excepted saying “I don’t want you to be hungry” and now I see that they were just looking out for me.
I start swim season and I’m faster loving the feeling of finally achieving my dreams I keep going thinking if this has gotten me this far let’s keep doing it! Then the boy looked at me finally after so many years he looked at me actually checks me out I’m so excited inside then he started to walk over to me. I have dreamed of this day forever when he would come and start talking to me. He comes up to me looks me in the eyes and says come on lets go across the street to McDonalds. He has a golden smile on his face that could light up the world.
As we start to walk I get really nervous I hate McDonalds all their food is so fat and greasy and bad for you I can’t eat that I’ll blow up like a balloon maybe I’ll just get a salad I think to myself without the dressing then I will do double on the treadmill later right? I mean this is the boy of my dreams I must sacrifice a little. We make small talk as we walk to McDonalds. We get there and he orders a Big Mac and he asks me what I want I tell him I’ll just have a salad. Nonsense he replied you just had a really hard workout you deserve a something good you like hamburgers? I try to tell him that I really don’t like hamburgers but he doesn’t listens and orders me a double quarter pounder with cheese. I start to calculate how many calories are in those things and I think that I will have to do 2 hours of elliptical when I get home just to work this off.
We get to our table and he gives me my sandwich telling me to eat first that I’m the lady. I tell him I’m not that hungry he doesn’t believe me he urges me to eat. Sick of his harassment I take a tiny bite of the hamburger he looks at me then tells me that one little hamburger is not going to hurt me I play dumb. He looks at me and says in a hushed whisper “you didn’t think I know?” I continue to play dumb but I’m trembling at the thought that somebody has finally found out my secret. He continues to tell me he has been watching me for the past year loose a ton of weight barely eating, practicing harder, he tells me that every day he sees that I get skinnier that it breaks his heart that I don’t think I’m beautiful enough for whoever I am trying to impress I sit there completely stunned that the boy of my dream thought I was beautiful without starving myself and that he was the only one who cared enough to do anything about it.
All of a sudden it was like the water main broke I couldn’t stop the tears crashing down all around me. He packed up our McDonalds picked me up and carried me to his car sat me down in the passenger seat. I continued to flood the car all I could think about was I won’t be able to stay like this they’ll make me change all of my hard work gone to waste. He got into the seat next to me started the car and started to drive. We sat in an eerie silence I finally asked him where we were going he told me to wait and that I’ll find out soon. All of a sudden we were turning into a graveyard.
Section 13 he got out of the car I sat still hoping he would forget about me but he came around opened the door and beckoned me out of the car. I reluctantly got out and followed him. He stopped at one grave with tears in his eyes, the grave had the same name as him, only the first name read Brittany. He told me about how his sister went through the same thing I did only he didn’t do anything that time he just was to wrapped up in his own life. With a choke in his throat he said” I can’t lose you both.” I looked at him and he hugged me I could have stood there for my whole life perfectly content with his warm body hugging me so closely, both of us crying. He finally broke apart from me and looked in my eyes and asked if I wanted my hamburger? I quietly nodded my whole body screaming no and I all I could think about was Brittany’s name on it and the look on his face. We sat next to her grave and he watched me finish my whole hamburger. The first full meal I had eaten in over a year the smile on his face as bright as the stars. 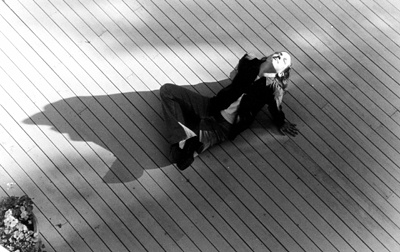 The author's comments:
I have never actually been anorexic but I have been close many times and someone has always helped me out.
Post a comment
Submit your own

Favorite Quote:
If nothing else, believe in art.
~Unknown

View profile
Good story, I like it, especially the title....