The War No One Ever Saw | Teen Ink

The War No One Ever Saw

Chelsi voiced her view of the situation, “Why don’t we just go in groups?”

Chloe, the white mare, cut down her idea, “That will take too long!”

“Well then lets send some people to attack the boys and keep them occupied!” Chelsie countered.

“NO!” Marie burst out, “We can’t attack them. That would be cheating!”

“Plus that would still take way too long.” Alice said.

It was Chloe, who voice the solution, “Then lets just use the invisibility potion.”

The Girls agree this was the best plan and Jane set about telling everyone what to do. Soon the ingredients were gathered. They said the magic spell and everyone rubbed some of the potion (mainly fallen leaves) on their torsos. The invisibility potion would allow them to be seen by their friends only.

So they split up. Alice raced up to the Pirate Ship. As she neared the top she called out, “Hey Clark!”

A boy of medium height turned and smiled, “Hi Alice.”

She came to a stop at the edge of the sand, panting slightly, she relayed the issue with the Warriors and requested his help.

“Sure I’ll help you guys” he replied.

Alice smiled and inquired, “Would you mind recruiting other kids too?”

She projected what she hoped was a reassuring smile and said, “Ok.”
Alice nodded in farewell and ran towards the large play structure in level three. She had seen Justin around there earlier. Justin was a first grader, but because of how his and Alice’s first and second grade classes were mixed they saw a lot of each other and were great friends. He was climbing up the green slide when she dashed up. He heard her coming and turned to look at her. Justin’s face split into a wide grin and her expression warmed too.

“Hello Alice” He leapt down from his high perch, no doubt trying to act debonair and brave. Instead his legs buckled and he fell backwards. Alice darted forward and crouched beside her friend. “Y’all right?”

Despite the bruising to his pride, Justin replied with a proud smile, “I’m fine.”

She helped him to his feet. He quirked his eye brow as he dusted himself off, “So do what do you want?”
“Well, the Warriors….” Alice proceeded to explain. Justin watched her intently, nodding his head at the appropriate times. “…So yeah I just wanted to know if you would mind helping me- us- with the battle this afternoon.” She finished
Justin nodded, “Sure, I’d love to help.”
Alice beamed, “Would you mind-“ That was when the Monitors blew the whistle to signal the end of Morning Recess. “Never-mind.” The two of them chatted about battle plans while they lined up at the edge of the amphitheater to go inside….

The tension was palpable as the children gathered for second recess. The Girls were just below the field, the Warriors on the ridge above. The Girls had the advantage of numbers, the Warriors strength. Almost every kid spent his or her recess playing intense games (hunted down prey, ran for their ‘lives’, defended their various clans or lands, or did daredevil acts to prove themselves). The Warriors did the hardest of the games and were hardier than most of the other children.
Nerves twanged as the kids stood tense, ready to attack. It was never clear who initiated the battle. Nor was how loud it was. The word could have been whispered and still created the response it did.
“Charge.”
The earth thundered beneath the children’s feet. The sound rose to a climax, fueled by every battle cry that joined the call. It evolved into a tumultuous roar just as the snarling combatants reached one another. After a light bruising, Alice, Marie, and Chloe retreated to the Two Trees, where they played hospital. When a fighter was tired or just wanted a break, he or she would pretend to fall. Then, if they were on the Girl’s side, Alice and her partner would haul them back to the Two Trees. There the kids would rest and Alice would fend off anyone who tried to hurt them. When the ‘wounded’ child was feeling better, he or she would launch back into battle.
After about 15 minutes of battle, the Monitors noticed the spectacle taking place on the Field. As they came into view a moment of silence descended.
“RUN!” The scream cut the air like a knife, shattering the relative calm. The former combatants fled in a stampeding pandemonium, thoughts of conflict thrown to the winds. Justin sprinted up to Alice and the two ran up the hill to the Pirate Ship, dodging other children. They cleared the bench at the edge of that part of the third level, hearts pounding. The two clambered over the edge of the Pirate Ship, their speed fueled by their terror and adrenaline. Then they were safe, dragging air into their lungs, exhausted from their sprint and fighting, sitting in a dark corner of the Pirate Ship. There they waited. Eventually, Alice peaked out to see if any monitors were nigh.
There was one close, but they were neither paying attention nor looking in their direction. She signaled to Justin and the two dashed down to the tetherball courts.
By the time a Monitor showed up, it looked like they had been playing tetherball all recess…
Before the end of recess, the Monitors had wrangled Jane and Collin. They were forced to hear a very long lecture and undergo a thorough chastising. Jane and Collin emerged grumbling to one another about how interfering the Monitors were.
The next day the mares were once again playing by the tree. The Warriors played tackle football nearby. The anger both sides had harbored towards one another was gone. Later the Girls and the Warriors played soccer together companionably if a little competitively. Relative peace had again settled over the playground. 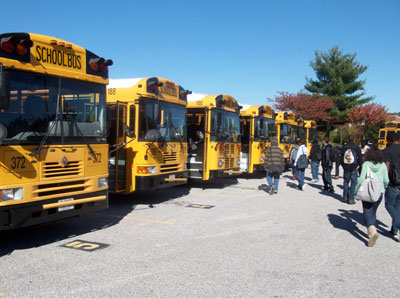 The author's comments:
I wrote this for english. I thought I did well with it... what do you all think?
Post a comment
Submit your own