An American soldier: the one thing little Jack had always dreamed of, thought about, aspired to be. Growing up, Jack’s fondest memories were of when Papa sat in the big stuffed chair in Aunt Susies dimly-lit living room and told stories. Happy ones, sad ones, Jack didn’t care, they just needed to be about one thing: the army. Even when all the other cousins left, heading to play outside, have dinner, or whatever else, little Jack would stay there, relishing the tales and asking more, always more.
And now, after years of anticipation, he was finally here, standing where his Papa had stood, almost shaking in anticipation.
Just like his Papa’d said, the hat was tight with promise on his head, embodying who they were and what they did. Their pose – all the same – made them one and the same, brothers, all part of the same make, the same squad, together in everything. Their words – perfectly in tune and radiating through the amphitheater – showed who they were, what they were here for, what burdens they were ready to bear. Burdens that would make him – and America – stronger.
Time passes, and experiences pile up, specifically in the shape of badges or recognition. Even after years though – three, four, five pass in a breeze – it’s still exhilarating, still exciting, still new. Jack wakes up every day ready for new experiences, always out of his bed with the military precision drilled into him after so long. Yet, unlike his fellows, he relished it, adoring the perfect mathematical-precision that was his life.
If it was up to Jack, he’d spend his whole time in the Army, but that wasn’t the standards. Everyone – even top ranked personnel that wished to stay – had to return home for short leaves.
It was this stupid rule that saw Jack back inside the United States border, specifically in Miami, Florida, the not-so-glorious home of his ‘folks.
Escaping motherly-oppression, Jack decided to wander the streets of his hometown. He didn’t miss it, exactly, but something about not seeing a place for five years took something from you.
It was for this stupid reason that Jack was foolishly on the streets.
From an alley, he heard snickers and, being the inquisitive soldier that he is, Jack went to investigate. As everyone knows, the Miami police isn’t that great, and Jack would appreciate any chance he had to keep the peace. HE was a soldier, after all.
It was, for this stupid reason, that Jack walked into that god-forsaken alleyway.
Like he’d suspected, the hooligans were three men, about twenty or so in age, hovering over something. Immediately assuming the worst, Jack wished he had a gun on him. Being a good citizen, he couldn’t just leave, but drug dealers – as these abominable fellows probably were – usually shot and then asked questions.
Silently, Jack approached them from behind, close enough for him to see what they were doing. And, to his surprise, it was not drugs. It was – in the mind of this particularly patriotic soldier – far worse.
For some reason, these men were huddled above the picture of a man in Army uniform, and they were graffiting and cussing the man as much as their slow minds could.
In humans, there’s a small place where we keep things that cannot be crossed. It is a very thin wire, one that anything can snap, and that – once it’s been opened – the person in question goes crazy, utterly ballistic and driven with rage. In some, this particular thing is murder, in others: rape. Then again, every human being is different, so it could be a thousand – million – different things. In this specific human, it was exactly what those men were doing.
Jack knew that these men were wrong about the army, but that was all he was thinking as he beat them to a pulp. Actually, these men were beaten to bad that they never woke up. Jack didn’t’ know that though, because – after dishing his mind to these horrid men, he rampaged around the neighborhood, asking anyone what they thought about the army and punishing those that had wrong answers.
And that, my friends, is why our once-proud Jack is now in jail, going to a psychologist six days a week and forbidden to get near anything to do with the Army. 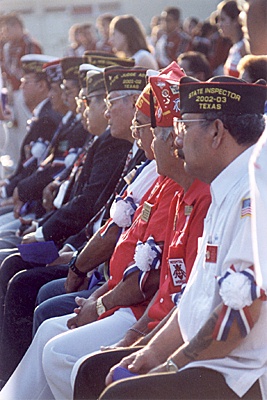 The author's comments:
I'm not anti-US or whatever, this was just a picture I saw that gave me an idea.
Post a comment
Submit your own

Wow.. You had me hooked from the first sentence. And promising it was! I loved this! I'm not anti-US either, but this is absolutely amazing! You're so talented!!!

Please take a look at some of my work if you have the time, and tell me what you think? I'd like YOUR opinion!! :)