My eyes, I knew, were wide as saucers, “It’s the rare, almost mythical Tersina Azulada from the Northern Brazil, located in a two mile diameter circle of the Amazon. This rare blue delicacy is marvelous to behold and quite impossible to find. So hard, in fact, that esteemed bird specialist Toby Marcus has claimed them to be a myth,” I smiled as I spoke into my recorder, already excited about my victory out long-standing feud, “The eggs – never before seen – are a shocking turquoise blue, and three are laid in the small nest located on a low-standing branch made up of straw threaded together.”
My mouth kept blabbering scientific jumbo, but in reality, my heart was almost stopping from the shock. A real Tersina Azulada? Here? And I was the one seeing it!
Toby Marcus was going down.
I’d been stationed in the Amazon for three months now, exploring on my own for the majority of the time. Normally, a team was sent out with me, but I always sent them in a different direction, stating that they didn’t know how to walk around birds. In reality though, I just enjoyed walking around by myself, enjoying the silence and the hot, heavy Amazon air.
My mind focused again on the task at hand, back at marveling at my discovery. Then, snapping my recorder closed, I was about to just stare at it when I remembered: pictures!
The mother had already flown off when she’d seen me, but it was enough that I knew what she was. And now I had her eggs. I quickly snapped shots of them from a couple of angles before settling myself further away, camera at the ready for her to show.
A random, irrational part of me wanted to start calling ‘Here birdie, birdie, birdie,’ but I knew that would just ruing my situation considerably. Still, it does start getting tempting after three hours of squatting.
The Amazon is never silent, which was quite a shock at first. The first day I got here, I couldn’t concentrate on anything anyone said to me, because my mind was busy listening and trying to catalogue what I was hearing, wondering if it was a frog or a bug, a bird jumping from tree to tree or a sloth slugging around. After three months though, the excess fades into the background, allowing me to focus on specifics, which is why I hear her so soon.
By my estimates, she was about 10 yards away, sneaking closer with hesitant hops. I could hear her, just beyond the tree to my left, and my breath caught in my throat as I brought the camera up to my eye, aiming it where she should be.
Then, almost like a model shy in front of the red carpet, she came out from beyond the tree, and in two seconds I’d taken ten quick frames. She was gorgeous, like a queen among birds, shrouded in blue a little deeper than her eggs. Her winds, tucked tight against her body, were speckled with black and gold, tapering to a golden point at her tail. Even from here, I could see her brown eyes darting intelligently, quickly scanning the area. She saw me, freezing, but when I didn’t move – or breathe – she apparently shrugged me off as harmless because she continued to hop.
If I hadn’t been taking pictures I’d have missed her flight, because from one second to the next she jumped into the air, opening her wings and flying the last eight or so yards to her nest. Once there, she perched, and I took another thirty shots in quick succession.
In fact, I continued taking shots until my camera refused to do so, flashing the sign ‘memory card is full’. Even after that, I stayed, watching.
Kiss my a** Toby Marcus. 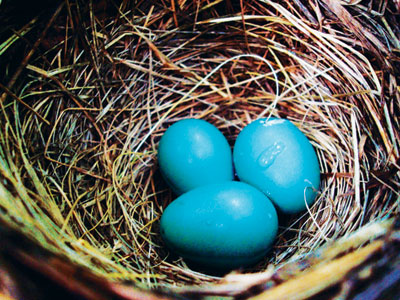