I lay my hand on the glass. It is ice against my skin at first touch, chewing away the last bits of warmth beneath my flesh. As mere seconds pass though, I feel the heat of the barricaded tropic water seeping through the glass.

“Look, Mum!” A tiny voice squeaks from behind me. I twist my head to see an eager and excited seven or eight year old girl with a dark glossy bob. She looks like she is pointing at me, but really it was what was behind the glass.

Magnificent, they are, I think. They are the aquarium’s most popular inhabitants for a reason.

They swim harmoniously in a pod, whirling in the pellucid, glassy water like ballet dancers putting on a show. Some ascend to the surface for air. I gaze at the water. The surface ripples, vibrations spewing out in spirals as the cool gray creatures breach, creating a small, wrinkled current. It resembles distorted glass as light and colors from the sun and sky splash on top of the water, ribbons of the warm colorful glow leaking into the tank like spotlights for the beautiful dancing beings. The fluttering light covers their bodies, flickering languidly.
One of them confronts the glass that separates us, touching his long, bottle-shaped nose to it, as he seems to smile at me and those who I am surrounded by.

“Mum, look at the dolphin! He’s looking at us!” The little girl squeaks again.

Surrounding them as the pod flows in the warm water are brown rocks soaked in vibrant colors of green and pink. From here, it’s hard to tell if it is coral or anemones. The rock grows from on top of the glass dish we are in to see the watery tank, and stretches to the other end of the display, forming a rocky bridge for the dolphins to swim under in order to reach the other side of the tank.

Pure white sand coats the bottom of the exhibit, once in a while being blown into the water above when their tails or fins or noses skim the floor. Yellow and green coral of all types, brain coral, pillar coral, sea whips, rest on top of the sand.

Sponges dot the ground as well. Sometimes, new dolphins would cover their noses with them to forage before they would become accustomed to the feeding schedule.

I listen as the dolphins suddenly break out into a chorus of trills, clicks, and whistles as a couple of them approach a colorful fish that has been thrown into the water by someone from above. Probably a child chosen to feed one of them by one of the workers. It happens a few times a day in the aquarium, Aussie Reefs.
As the pod swims closer and the fish plummets further down, wavering, the slow clicks become louder and louder. They stare at each other. The dolphins whistle a few times before returning to the clicks. The clacking rate speeds up as one of them finally nudges the fish with his nose.

“They’re approaching something they find interesting and new,” I announce to the rest of the group. “That’s why they’re making those snapping sounds. Have you ever wondered why dolphins clicked so much?” I say. “And the whistles are to communicate with one another. Each one of them has their own distinct whistle to find each other.”

“They all sound the same to me,” a man with a beer gut chuckles with an American accent. Travelers normally are the ones I show tours to.

“As most of you should know, dolphins are probably one of the most intelligent creatures in the world. They can sense a difference between the sounds. Besides, they probably think we all sound the same too,” I say.

The little girl smiles at me. “Once, me mum and I saw wild dolphins at…uh.” She pauses. “Where was it?”

A woman, presumably her mother, politely grins and says, “Snapper Rocks. This little ankle biter’s brother was surfing there. It’s his favorite surf break. The bee’s knees he says. Have you ever been there?”

The girl interrupts before I can respond.

“Yes, they were just swimming in the waves. I could see their fins peeking out of the surface as they got some air.”

“Breach,” I tell her. “When whales or dolphins break the surface to get air, it’s called breaching.”

Her mother glares at me, probably for correcting her daughter.

I stare back at the tank to ignore the icy scowl that is beaming towards me, burning a hole through my skull. I notice that the fish is gone and eaten.
The dolphins are once again dancing in synchronization. Their tails twirl. Their fins weave. Their bodies frolic. The pod performs pirouettes and grand jetés rhythmically with each other, the sounds of laughter and pop songs beating from above of the surface acting as their composition.
I imagine what it would be like with actual music, the dancing I mean. I play the melody of ballet in my mind as I ogle the glorious performers stunning the audience. 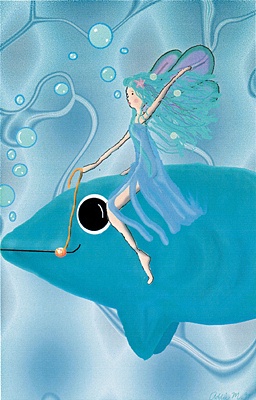 The author's comments:
I had found this story on my computer when I was trying to find things to delete. It's from two years or so ago and it was for school, but I liked it enough to publish it on here.
Post a comment
Submit your own