Mirror mirror on the wall

I never meant for it to get this far. I never thought it could get this far. After all, in the beginning it was nothing but a harmless game to me. Eat a little less, do more exercise and on the whole have a healthier lifestyle. But somewhere along in that innocent little resolution, something had gone horribly wrong. And over time that little flaw had spread, manifesting into something much more ominous; sinister even. Now it is not a game anymore. It is an obsession.

It happens to be a cold day. I shiver involuntarily as I speed walk down the small hill winding down from my house, pulling my coat tighter around my petite, frail frame and adjusting the small bag that is slung haphazardly over my shoulder. An icy wind rushes past me, playing with the stray strands of mud brown hair that fall out of my messy ponytail and dance in and out of my vision, but I hardly notice. I only quicken my pace, my arms locked firmly around myself. Winter’s coming, much too quickly for my liking. You see, I’ve never liked winter. All it brings are icy winds and barren wastelands of snow, devouring fields and replacing them with blankets of white. Oddly, I don’t like snow either, mainly because it is cold and I don’t like being cold. But then again it seems I’m always cold nowadays, no matter how many layers of clothing I wear.

When I get to school, I find nothing has changed since Monday. My friends are huddled around their tables talking, laughing and smiling. They’re happy; carefree, as they move as one to stand by the lockers, complaining about trivial things such as hair and makeup. I wish I could just walk over to them and tell them that they’re being absurd and that appearance isn’t everything, but that would make me a hypocrite. Suddenly, another of my friends cheerfully strolls through the door, a bacon sandwich clasped in one hand. Surprisingly she notices me and walks over, grinning happily. She greets me, asks about my maths homework, and offers me a bit of her sandwich. But I refuse. Somewhere in my body my stomach rumbles hungrily, but I take no notice. ‘Be quiet’ I think to myself, ‘you’re not getting fed.’ But when it doesn’t comply I have no choice but to ignore it, setting my bag down on my desk and wishing I am anywhere else but here.

The morning drags on for a lot longer than I had originally thought. I hardly listen though. My dull, mahogany eyes stay fixated on the clock opposite me, counting down the minutes until the end of the lesson. And as I sit, wishing that the world around me would simply disappear into oblivion, I remember how things used to be before my...sickness. You see, I wasn’t always like this. I wasn’t always so cold, so impenetrable and unfeeling. There had been a time, long ago, when I was happy, or at least a close derivation of that emotion. Of course I was never perfect, like so many other things in this cruel world. I didn’t have silky hair or flawless skin, but the most important thing was that I didn’t care. In fact, I had never once lingered in front of the mirror a moment longer than necessary to admire my reflection. I wasn’t that sort of girl. That, and there wasn’t a single decent sized mirror in the house. But I never cared about that small, insignificant fact, because I didn’t care about my appearance. I could quite happily strut around in muddy jeans and ridiculously large and unfashionable shirts without feeling any embarrassment. So what had changed everything? I knew the answer to that. It had been something as simple as a new, golden framed and full length mirror.

The day the mirror arrived it was raining. It was a Tuesday, just like today, and it was only four days after my thirteenth birthday. My parents thought it would be the perfect birthday present; the only full length mirror in the whole house. And so when I came home that day, damp from the rain, I had scampered up to my room in search of dry clothes only to find the mirror- its immaculate, glassy surface staring back at me. At first I had thought it was beautiful. It’s shiny, reflective surface had been pristine and it’s flawless, delicately carved golden edges glistened and shimmered like jewels in what little sunlight managed to filter into my room. It was breathtaking, majestic: perfect. And most of all, it was my downfall.

As the days wore on, I became attached to my mirror. It was flawless and beautiful, all the things I slowly began to realise that I was not. Every morning when I woke up I was greeted with my reflection; a pair of dull, mahogany eyes staring out of a gaunt, pallid face marred by light freckles and a sliver of lips. Nothing special: nothing unique. I was ordinary; invisible to everyone but myself and my mirror. And because of this, the inevitable happened. The mirror finally made me realise who I had become. For the first time, I saw my real appearance. And I was disgusted: revolted. I did not even know why, just that I had to do something to change it. And it was at that time that the weighing scales decided to take refuge in the bathroom.

It started as a diet; just a simple promise to myself that I would eat less chocolate and do more exercise. I convinced myself that I was doing it for my health, not for my appearance. But that was a lie. As time passed and my parents began to come home later and later, I realised that it would never be enough. It was the same every night. I could spend hours in front of my mirror, simply examining my reflection and wishing I was thinner. In front of my mirror, my precious and beloved mirror, I didn’t have to be someone else. I knew what my goal was then, it was very clear to me; Lose weight and mould my body into something better. But it seemed no matter how much I exercised or how little chocolate I ate, I would stay the same; lost forever in the body I had grown to hate. And so I did the only thing I knew would work. I stopped eating.

Suddenly I feel a sharp nudge to my side.

Wincing, I push my memories to the back of my mind temporarily and look up. My biology teacher, Mr. Bradford, bears down on me threateningly, his expression stern. His inky black eyes are narrowed, his lips pulled into a thin line etched onto his face.
“You would do well to listen when I am explaining something, Miss White.” He mutters in annoyance, his expression wavering for a moment before crinkling into a scowl. My eyes travel to the text book on the table in front of me, refusing to meet his gaze.

“Very well, Miss White,” He croaks. “Let’s see how much you have learned today. Now, why is it important to eat a healthy, balanced diet?”

I don’t know how to answer that. ‘Who says it’s important?’ is the only thing that comes to my head. But somehow, I don’t think that is an appropriate answer. And so, I simply keep silent. And for a long moment the tense silence stretches throughout the classroom, smothering everything in its path.

Suddenly the shrill sound of the lunch bell blasts through classroom, startling everyone including me. I almost sigh in relief; it seems I have been saved by the bell. In one fluid movement I snatch my books, grab my bag and without even turning around to glance at the surprised expressions on my classmate’s faces, I speed out of the classroom, revelling in the feeling of my freedom. I’m not sure where I’m going, but anywhere far away from that dreaded classroom is good enough for me. I glance down momentarily. Lost under my many layers of clothing, I distantly hear my stomach growl angrily. I make a face at it. ‘Stop it, you’re not getting fed. And that’s final,’ I think to myself. It doesn’t argue back.

It takes me a long time before I finally realise that I have stopped. When I look up, I see that I am outside, standing under a magnificent oak tree. A small smile worms its way onto my face as I lean back against the gnarled trunk, the golden leaves creating a veil that separates me from the rest of the world. I sigh softly. Somehow, my mind drifts inexorably back to my most prized possession: my mirror. I wonder briefly if there will ever come a time when I can look into its glassy surface and see myself again, the real me, not the hollow shell that I have become. Somehow, I don’t think so. My obsession managed to destroy the old me a long time ago, when I stupidly permitted it to take control of my life. That was a mistake. And the part of me which is still sane regrets it, even though I know that it is irreversible now. No amount of therapy or encouragement is going to change me either, because it is already too late. I am like clay, moulded into a shape when I was young and innocent, and unable to change now that I have hardened. It is not just a simile; it is a fact- one that I cannot seem to escape. And somehow, I simply can’t find it in myself to care anymore about this fact.

No, I lost that ability a long time ago. 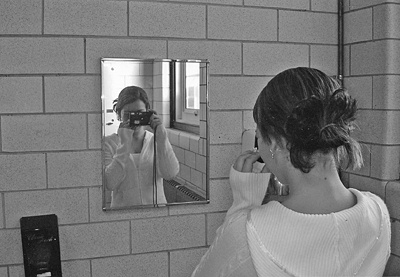 The author's comments:
this was a piece of creative writing for my english coursework...it's not promoting anorexia or eating disorders in any way, just raising awareness of it.
Post a comment
Submit your own