My Home: A Hawaiian Short Story

I only know one home, Maui. I swim in the ocean every day, fish with the village people, and play with the children. My village depends on fish to survive in the wilderness of Maui; vegetation was abundant, but it did not provide enough energy for our village.

One day, as the villagers were coming back from their daily fish hunt, we noticed the hunters coming back looking dejected, a bit worried, Māmā asked one of the hunters what happened. “Aliana, I don’t know,” he said, “we went to get the fish in our boat, but when we retrieved the basket, it was bare, there were only ten live salmon.”

“What?” Māmā exclaimed. She caught my glance and whispered, “Aikaka, do you realize there are one hundred and fifty people living in this village?”

“Yes Aliana, I understand. We will have to ration the fish, and make do with our supply of mango and papaya for now.” Aikaka said worriedly.

“But, what about the supply from the mainland, when is that coming?” Māmā asked.

“Alas, it comes every month, we have three more weeks to go, what shall we do?” Aikaka said.

Māmā had told me not to eavesdrop but I couldn’t help it, at such an essential time during this summer we would all starve to death without this supply of food. I couldn’t help but wonder what was happening to our environment which had been so reliable. I went down to the beach to think before dinner. The beach is my home, my turf, my tranquility. I got down to the beach and sat down to reflect on the events of today. Everything was calm, peaceful, it felt just fine. The sunset was vibrant with the color of the corals. Swishing the ocean around my feet, it felt like I could make everything go back to normal, like the world was the ocean listening around me.

Just then, something caught my feet, hard and sharp, I jumped up, and the object fell down. Curious, I picked the object up. There were six holes lined up, three on each side with holes cut out in the middle. Something I had never seen before. Right when I was about to put it in my pocket, I heard a distant calling.

“Leilani! It is almost time for dinner!” It was Māmā coming to get me. She knew me. She knew I was going to be here. The village’s events were also swimming around in her head, we knew each other so well. Māmā had a worried look on her face, something I had never seen before, fear. As soon as we got to the village I could see the same look on others' faces as well. Scared, I approached the cooks of the village.

She said, “The fish have a weird object in them, I cannot describe it.” The object was just like the one I found at the beach, with two columns of three. I could not believe it. I felt that if I told Alani she would think I am playing another one of my jokes with her, so I approached Māmā.

“Māmā,” I whispered. “When I was at the beach, this same object appeared from the ocean, could it be hurting the fish?”

“No, ku’u aloha, my dear” Māmā said, “this object was only found in one salmon, however, we do have to discard it.” The villagers heard this, and quickly discarded the fish, rations were made from the other nine salmon, adding on the vegetation from our supply. Dinner was scarce but it was just enough to last through the night. Looking at the crested moon, I wondered why such a beautiful world would do such harmful things to the things that give us life.

Weeks passed, more of this dreadful object was found, and soon the whole village was starving. We could not survive under these harsh circumstances, we had lost track of weeks, the fish were nowhere to be found. My māmā had been telling people around about how we should get help before time runs out for the village. The leaders, however, believed that if we asked for help our land would be taken away from us forever. My heart sank when I heard that my life could change like this.

However, we had no choice, we prepared to signal in coming planes to rescue us. Fires were created, signs were drawn, all while rations were dwindling. However, we had forgotten about the supply boat, when it came to the shore, the official whispered something into Māmā’s ear. Her eyes widened as she announced, “My villagers, we have found a way to be rescued; however, the officials ran into the same problem. They did not find any fish to bring.” The villagers were shocked about how these fishers were running into the same problem. Māmā continued, “We shall leave Maui behind for now just to get back on solid footing.”

Instead of relief, I felt fear. Fear they would take us to an unknown land, without the comfort of our home of Maui.

And, as I am sitting here telling this story, I am leaving my home. The turtles I would swim with, the coconut trees I would shake, and the sound of the crests falling to the beach. My home of Maui, lost all because of that one object. My beach will be another's beach, our village will be ruined to create structures, our whole world will vanish. Because of that object. Only later I would realize that this object was plastic. 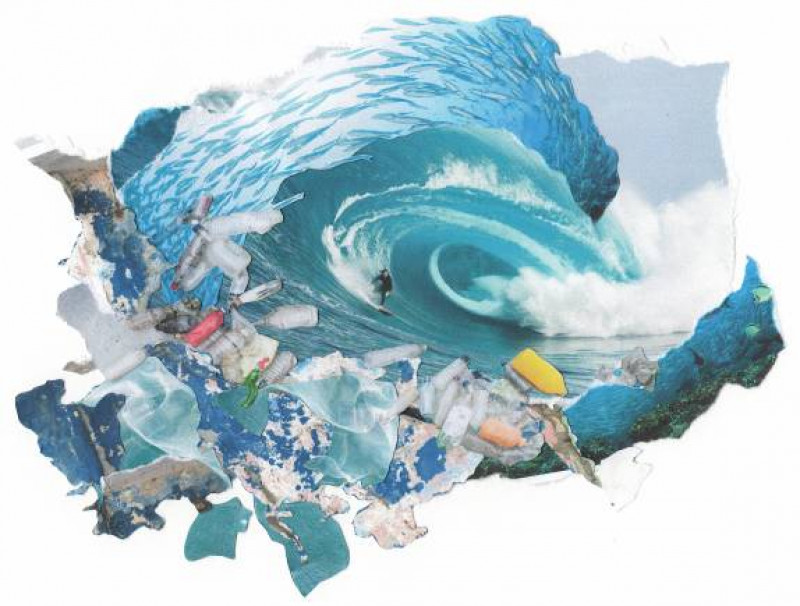 My Home: A Hawaiian Story follows Leilani and her village in the island of Maui. The horrors of climate change and ocean pollution explains the effect that it has on island populations. This story shows how a single piece of plastic can turn into something huge.