Not My Family | Teen Ink

“GEEBERS IS BURNING THE HOUSE DOWN!” yelled Jackie.

Jackie is the oldest son and Fanny is the youngest daughter and Bettie is in the middle. Geebers is the baby, who is too young to do anything but reach out and cry. He is too young to burn the house down, Mother says.

Grandma is the one who disgraced the family by filming her skydive off the Statue of Liberty. It was a fake suicide attempt. Grandma is ninety-four. She isn’t really suicidal—it was a video stunt to make a dank meme.

Grandpa, Grandma’s husband, is currently in federal prison for his assassination attempt against the king of Saudi Arabia. He sent the king poisoned meatloaf. Nobody knows the name of his prison because it is so unusual and obscure. He is served the Loaf every day and is reminded of his crime, which he wasn’t smart enough to pull off.

Auntie is bulimic. Uncle Skull is an emo. Great-uncle Murph disappeared while illegally shooting penguins in Antarctica. Papa has left the family to be a monk in Siberia. Last seen, he had lost both ears to frostbite, so even if people screamed at him to get home, he wouldn’t hear. He only communicates through Russian sign language, and not too well since he is on a vow of silent.

Jackie and Fanny and Bettie want to be morticians when they grow up. They are fighting over who gets his or her name on the sign. Jackie will make caskets, Bettie will write obituaries, and Fanny, who has an IQ of 86, will polish the velvet chairs. They are building a Treehouse so they can practice funerals on their dolls, pet goldfish, and random dead animals in the yard.

Geebers—whose real name is Gershom—baby Geebers has the most sense of anyone in this disgraceful family. He needs to be swaddled, burped, diapered, bathed, and have people pick up the toys he stubbornly pitches to the floor. He wouldn’t fuss if you took him to a bloodthirsty dragon, and he wouldn’t panic on the Titanic sinking. A birthday party and a festering dumpster at McDonalds are all the same to him. He knows no difference between any two things on earth. He sees everything and knows nothing about the family he’s been born into. 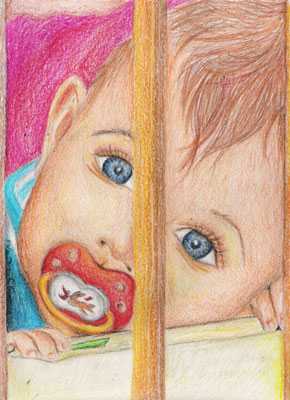 This story will not be editor's choice. I know. Even if it's lost and forgotten in a sea of submissions, as I know it will be, let it be known that this story is not about my family. (Shhh...)

View profile
you were right about the editors choice thing.