Glasgow was beautiful from the warmth of a dewy window and a crackling fireplace. The rich could watch the yellow-lit homes on the winter streets, and the sapphire midnight sky, with a glass of red wine and a bite to eat. Even the air among the wealthy seemed to swell with convenience and comfort. Mela had seen it, clear as her glassy eyes.

Mela had a home. It was the small patch of cobblestone street behind the Butcher Baker’s humble shop, swallowed by darkness. She lay and watched the stars each night until her fingers turned numb and her nose a rosy red and until the stir of dawn awoke the city once again.

On some nights, she wandered. Yes, she trudged through the streets, under the roofs covered by white snow-duvets, and shards of ice hanging from carved gables. Past the older men, evil men, dangerous men, and into wealthy neighbourhoods and looked at lives she could never have. Looked at people, people with red wine and bites of food by their sides. People who had tucked in their kids, into their warm wooden beds, and could now enjoy the still of the night, the peaceful hour before another day.

No one saw the snowchild, only the mysterious footsteps that had settled in the snow the following day. Lonely and slow. Yes, Mela was quite invisible until the day a man by the name of Roman saw her.

Indeed, Roman swirled a glass of wine in it’s crystalline grail, as he blankly observed the town he’d grown up in from the safety of a warm home. He was no longer young, hair greying at the sides of his face and bones creaking uselessly. He was not the man he used to be.

Life no longer fascinated Roman. Not the complexities of religion and marriage, not women, not children or work. He floated uselessly along the river of time and he waited for death to pick him out. He imagined they would walk into an exotic forest to the sound of monkeys and bustling insects, brushed gently by the comically large leaves and fiery red flowers within the brush. Then he would be gone.

But on a wintery Glasgow night, as Roman stared out the windows and into the eyes of his entire life, far, far away from Death’s Jungle, he saw a cowering, black shape in the night. Indeed, it looked evil from the wealthy home he sat within.

The monster’s back was curved and hunched, and it’s head swung mischievously, eyes looking about the neighbourhood. It was bony, thin and long and striking. Roman, who had only been about the most beautiful and wealthy ladies in Glasgow, thought this to be no human.  No, what Roman saw that night, was Death.

Death trudged away, although not before it’s shadowed features laid it’s eyes upon him, staring through the glass.

Roman stayed awake all night, emptying a bottle of wine and clutching his most significant gun, eyes red and wide. Death had finally come. It had come and it’s presence had awoken a clarity that Roman had otherwise lacked. He didn’t want to die.

The next three days, Roman slept not a wink. He walked around the house with his wine and his gun, and shook and cried deliriously, an imprint of the night’s beast carved theatrically into his mind.

On the third night though, it came back. The Snowchild walked her usual route through the blue and yellow city, looking at lights that stretched across hills and curved around moon-reflecting lakes. Mela looked at shooting stars and her own silver-mist breath dissipating into the crisp winter air. Mela saw everything, truly saw everything, and she knew it was beautiful.

On the most pretty night in January, in the most gorgeous place on earth, a gunshot rang into the fields and hills surrounding the city. The Beast and the Snowchild collapsed at once. From the hole in her stomach, thick and warm blood oozed into the cracks of the cobblestones, and her face flushed and her eyes sparkled.

Roman was drunk and out of breath, and the gun in his grasp shook wildly. Mela stared down the barrel of a shotgun. Then it came again, the gunshot.

Mela’s face contorted and curved in on itself around the bullet. She stopped breathing. Roman shot again and he cried. Where a rosy nose and doe, baby-brown eyes once where, a gaping red hole stared back at Roman, as he lowered the gun.

It was a monster. It was Death. Drunk and cowardly, the rich man crawled back into his home. It was a monster, he told himself, but even he had seen the look of horror, as the Snowchild faced her inevitable demise.

‘Til Roman eventually did die, he said the same thing. He had escaped Death. But he was wrong and he knew it by the face he saw each time he closed his eyes. In turn of the comfortable dark, he saw her face, blown off, contorted and mauled by his doing.

But if anyone asked, and, oh, they would, Roman had escaped Death. By just a hair. 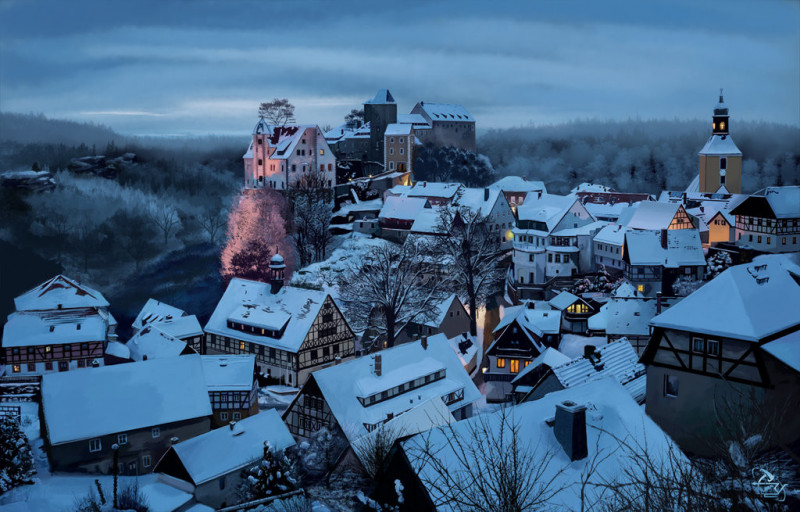 I've started writing short stories from song titles. This is from 'Snowchild' by The Weeknd. Although, the story has nothing to do with the actual lyrics, having a certain 'vibe' and a title in mind has helped me very much with my writing.