It all started approximately 200 million years ago. No, I'm not kidding. It's safe to say that this story has been in the works for a while now. I wouldn't label it my story simply because that couldn't be furthest from the truth. The mere use of the word "story" implies that it's not just about me: a real story could never belong to one person only, after all. We're all tangled, interconnected, the invisible strings that connect us stretching but never breaking.

So, the beginning is as distant as it can get and it is not clear how exactly it all turned out to be the way it is nowadays, when there are seven continents instead of just a giant chunk of land like back then. One thing is for sure, though: there were trees, wetlands and volcanic lava. Then, the lengthy, million-year process started. Involved were ash particles, tiny minerals, dust and, somewhere in-between, invisible streams of fate. It may sound pretentious to assume that a force as important and as strong as destiny would care enough to create a perfectly chaotic mess resulting in my existence. But it seems like it did, because here I am, sat in my dad's old SUV, my fingers curled up around a small rock. Only it is not a rock, it is petrified wood. That's right. Remember the weird stuff I was talking about? All that "trees, lava, 200 million years ago" incomprehensible narrative? All of those things aren't just a figment of my imagination. They are real, and have been long before any Homo Sapiens existed. The evidence is right before my eyes, in the Petrified Forest National Park, full of both little and enormous fragments of those trees that have been around long enough to witness the dinosaurs' extinction. How? Well, the splashes of water and lava that I mentioned made sure the logs turned into half-fossil, half-mineral rocks. And people from all around the USA come here to see them while contempling the inevitable truth: our lives are insignificant even compared to those of some lifeless mix of tree and quartz.

As a resident of a small town in the state of Arizona, where the park is located, I was aware of the its existence ever since I was a little kid. Regardless, I had never visited it, partly because I was never one of the children wildly interested in nature, partly because after my mother's death my father never had the time to bring me here. But now I'm here and despite the fact that I took Dad's car for the solo road trip, it feels like my mother is way more present now than he is. I'd like to believe it's because I think about her so often that her spirit is always with me, but I know it's just the effect that the piece of paper I'm holding has on me. She left it for me before she died, a sheet full of her cursive writing, that reads "Bucket List". And I'm about to check the last item on it, which says "Return this rock to Petrified Forest National Park. Demand to see the letters. Your luck is in your own hands."

I tenderly grabbed the piece of petrified wood again, wondering why she asked me to return it. The other items on the list were trivial, easy-to-guess things that are probably on anyone's bucket list: go skinny-dipping, kiss a stranger, get familiar with the town where you were born. Although they were fun to complete for the sake of making my mother smile in heaven, they never intrigued me as much as this one.

Ten minutes after I parked the car and went through the bucket list again, I'm standing in front of the cabin of the park rangers. The smell of silence is everywhere. A girl opens the door after the third knock and when she hears my demand about the letters, she smiles.

'Are you a journalist or something?' she asks, her smile still wide.

'Well, she's dead,' I answer, causing awkward silence. 'But she made a bucket list for me, all around the state. She left this rock for me and suggested I return it and ask to see the letters.'

The staff member nods, then goes back into the cabin. When she returns she welcomes me in, pointing to a giant pile of letters sitting on an oak desk in the corner of the room.

'I suppose you don't know why your mother sent you here, so I'm gonna explain. Long story short, you know that the petrified wood pieces are very precious. Not in price, but they are important because of how they were formed and all. They are like the plant equivalent of dinosaur fossils, you know. So, naturally, when this park opened people started stealing little fragments as souvenirs. It wasn't until the 1930's that they realized,' she says, letting out a sigh. 'They realized that theft is bad. Not because of their moral compass or anything. There was just a rumor that whoever took a piece, had bad luck for the rest of their life. So they started mailing us not only the rocks, but apology letters as well.'

I took a look at the pile, then grab a letter and start reading it. For all I know, I don't stop reading until hours later. Does bad luck exist? I'm not really sure. People have shared some horrible stories about divorces, death and all of that after they had stolen a petrified wood piece. But then, they returned them, however late. They took the matter in their own hands. So that was my mother's message: to take control of my own fate. 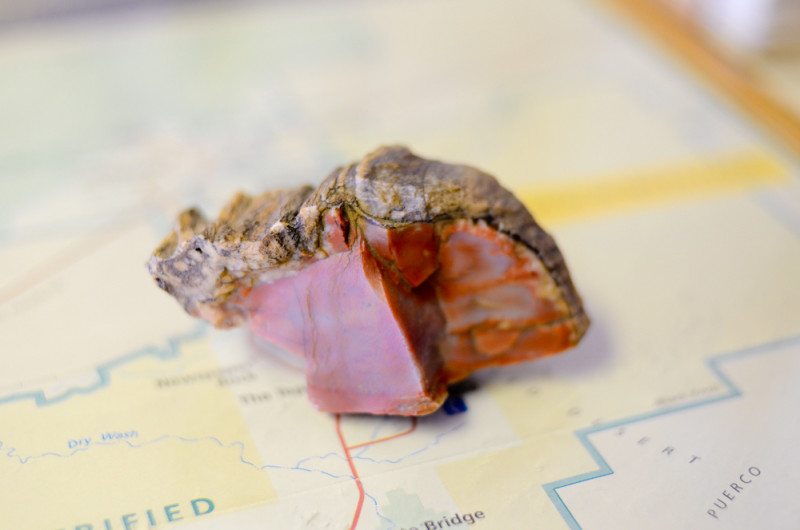 Hi! I come from a small Eastern-European country and writing (especially in English) has always been my passion. Here's a short story that was inspired by the real Petrified Forest National Park in Arizona and the theft there.