I was staring into oblivion, the roaring crowd around me felt like it was miles away. The walk from the dugout to the on-deck circle felt like a marathon. There was one out in the bottom of the ninth, game seven of the World Series. There was a runner in scoring position, all anyone needed was a single and we would be hoisting the Commissioner's Trophy and popping champagne in the locker room. I felt numb, I couldn't move, I had a feeling that this game was going to come down to me, that I was going to have to be the hero that every Boston Red Sox fan was looking for. From my left, I heard "STRIKE THREE!" It was my time now.

Saying the walk to home plate felt like an eternity would be an understatement. I could feel the 37,731 members of the Boston faithful staring into my soul. They had high hopes. It was their year to win. The fans almost wanted it more than the players and it all came down to this.

Bottom of the ninth.

The season was riding on me. One at-bat. One chance to make an entire city's dreams come true. Time was slow, I could feel the milliseconds ticking by. Every step I took felt like I was in slow motion like I was an astronaut in an action movie walking out of the hanger. Tens of thousands of screaming fans cheering for me to bring home the trophy.

I could feel myself starting to shake, all of the what-ifs? were flowing through my head. If I continued to think about everything that could go wrong, I would not find success in this plate appearance. I tried bringing my mind elsewhere, you know, the typical happy place, bluebird skies, water just as blue, beach vacation, the same old same old. Of course, that didn't work. There were too many distractions, about 37,700 distractions. I was trembling and I wasn't even at the plate yet.

There was a distinct feeling about standing outside the batter's box, waiting to step in and face 97 mph of cork and leather. Just 60.6 feet away was a guy who was trying to throw as hard and as strategic as possible. I knew the guy had a full scouting report on me and he knew exactly where he wanted his pitches to go. The more I thought about it, the more I could feel my legs turning to jello. My palms were sweating profusely inside my batting gloves, I couldn't keep my back straight, continuously bring my shoulders back, puffing my chest out, and then going into a slouch. I was antsy.

I put my back foot into the batter's box and turned my head to the third-base coach. He was throwing up all the signs, the whole works. What everyone else saw like lightning, I saw in slow motion. In reality, his hand would move from his hat to his belt in a second, but what I was seeing was his hand moving almost comically slow, giving the signs of what they wanted me to do, what they expected was coming, and everything that was in between. I see the keys, I see what I need to. It's go time.

Two feet in the box, the pitcher staring into my soul. He was hunched over, back foot on the rubber, resting his left elbow on his knee. His gaze shifted from me to the signs he was receiving from his catcher. He was gathering everything he needed to know about what pitch to throw and where to put it. He was ready for this battle. Was I?

I knew my job, I was supposed to watch the pitch unless it was too perfect. I was looking for the one fastball that every player wanted. A hair low, right down the middle, home run ball all day. You seldom got it. Pitchers were too smart, they never gave you what you wanted. The pitcher suddenly stood up straight, he was ready to deliver the pitch, he had it in his sights. Time stopped. The stadium fell silent, 37,000 fans just seemingly disappeared. It was just me and the pitcher. I guess you could call it tunnel vision, but all I could see was the ball, I saw the ball go from his side to his glove, throughout his motion as he took a step back and his leg came up in a motion that felt slower than molasses going uphill in the winter. He reared back and released the ball. I could see every stitch, one by one as they spun around, barreling toward me at about 81 mph. It was a slider that he threw low and outside. He wanted me to chase, he knew I chased pitches like that. He wasn't going to get me with that one. It wasn't The Pitch.

The count was 1-0, it was in my favor. I was starting to get antsy, trying to go through the motion after the first pitch was getting tough. I couldn't stay focused on getting the sign, lightning my gloves, making sure my helmet was on tight, the whole nine yards. I was distracted, picking out the different things being shouted from the stands.

"C'MON 2-7 JACK THIS ONE ONTO LANDSDOWNE STREET!!"

"TWENTY-SEVEN YOU SUCK, GO HOME, THIS TITLE IS OURS NOW!"

Some were nicer than others it seemed. Before I had time to realize it, I had missed the sign completely. I had no idea what wild movement could possibly be coming at me, what kind of things they wanted from me in the box. I was going into this at-bat blind. I still had one foot out of the box, no time to look back and get the sign. I had to step in, I had to step up.

Once again I found my eyes locked with the pitchers. We exchanged scowls and he moved on to his own signs again. To say I was anxious would be an understatement, I was trembling. I had no clue what to do, the entire city was riding on me and I didn't know what to do. The Pitcher reared back once more and hurled the ball toward me. Time was moving so slow that I could read what the ball said:

Ninety-seven miles per hour of Robert Manfred's signature were flying at me, the four-seam fastball, the fastest pitch in baseball. It was coming in high and tight. It was going to be a strike. I swung with all of my might behind me. And all of that might kept on going right past the baseball. I heard the pop of the glove behind me. I had swung right through it. My blunder was answered with an immediate roar of boos from the crowd around me.

"GET THE HELL OUT OF OUR STADIUM IF YOU CAN'T HIT THE BALL!"

They were upset, to say the least. I knew it was all an in the moment type of anger, that if I even pulled a single out of this at-bat, I would become a hero of this city, that my jersey would become the number one selling among Red Sox fans. I would be forever immortalized in baseball history. Maybe even tacking on a World Series MVP, wouldn't that be nice, I'd get a nice new truck and everything. I had to stop thinking like this, I was getting in my head, I was growing my ego. I got my sign from my coach. I made extra sure I was paying attention this time. I stepped into the box. Things seemed to be moving a lot faster now. That was confirmed when he blew the next pitch past me for strike two. The count: 1-2, I was behind.

Everything started to spiral out of control. My head was spinning, I felt like I was going to fall over when I stepped out of the box. My entire body was shaking, I felt like I was frozen in place. I had to bring my mind somewhere else or I wouldn't be able to pull this off, I would let the entire city down. I took a deep breath in and I could smell the Fenway Franks being served around the ballpark. I could hear the fans pleading for me to bring the championship home. I could taste the desperation for a title in the air.

I dug in for the 1-2 pitch. This time the pitcher had a different kind of look in his eye. One of confidence, he even leaked out a little grin. I was lost, I was racking my brain, trying to figure out what he was trying to do. I needed any type of sign to know what was going to be coming at me. I was so lost in my head that I almost didn't see the pitcher rear back to hurl the ball toward the plate. It was now or never, my make or break moment.

The pitch was coming right down the middle, I swung so incredibly hard, just as the pitch tailed away, just out of the reach of my bat. 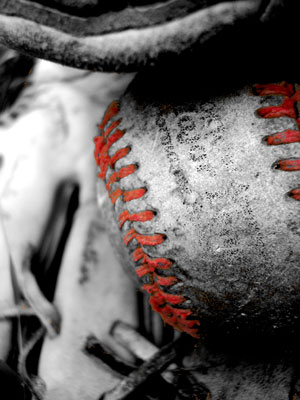 I hope the readers find some suspense out of this and take it as something to enjoy during these trying times that the world is going through.