Her tea has gone cold. She continues to pour the honeyed liquid into her mouth, refusing to let this day be a complete loss. She drove two hours to this crowded, noisy cafe, committing half a tank of gas to the sullied atmosphere. She will not waste $2.75 on a cup of chamomile.
She watches the band through glazed eyes. Objectively, they are not bad. Too loud for the stuffy, coffee-scented room, but not bad. She stares unfocused at the drummer, his wrists supple while his face remains impassive, his head bouncing slowly, dispassionately, to the beat. He is wrinkled and exhausted-looking, but she considers for a moment approaching him after their gig is finished, asking if he’d like a cup of tea or a croissant. She imagines the two of them huddled in a corner of the restaurant, leaning towards each other over steaming mugs, faces lifted in laughter. The thought gives her no pleasure. Lately, she has been thinking such things often, picturing herself spilling her life to strangers because it’s been building up for far too long. But she’s a long way from actually talking to this drummer, who wipes his nose on his sleeve between songs and, judging by the looks they keep exchanging, is probably married to the male lead guitarist anyway.
Later, she supposes, she will drive home in the quick-falling winter dusk. She will pour herself a glass of the wine her husband always insisted was for special occasions, and she will drink it with a kind of tired vindictiveness and then pour herself another. She will call her son at college, perhaps. He will not pick up. She will listen to his tinny voice tell her to leave a message, and her mind will fly through several possibilities, I miss you and I love you andwhy the hell don’t you ever answer your phoneand please come visit soon, before she will tell her son that his father stood her up again, and that if his father calls him at school to please tell him to get in touch, and that she hopes his schoolwork is going well and she knows he has exams coming up and that is probably why he is not answering the phone, she knows he is studying hard and she hopes everything is all right, and all the while she will picture him staring at his vibrating phone with her picture on the screen, and letting it ring, and then turning from his mother’s smile to chug vodka, or take a bong rip, or some caricature of college misbehavior that she does not want to believe of her boy but figures is ultimately inevitable.
Later, she will look at the bottle of expensive wine, half full, and she will hate it. The phrase “special occasion” will echo in her skull in her ex-husband’s grating tenor, and she will rise a little unsteadily to her feet, pick up the bottle of wine, and pour it down the sink. Or she will water the violets on the front steps, purple on purple in the ethereal halo of the porch light. Or she will let it glug-glug-glug into the bathtub and turn on the tap, so that it swirls in maroon vortex down the drain.
But now, she will drink her tea. She will not rush it. Perhaps she will buy herself a croissant. She is aware of how she looks, but she refuses to be made an object of pity. She will sit here for too long, and then a good while longer.
The café’s lone waiter is hurrying toward her table. He will ask if she wants a refill on her tea. Maybe, moved by her straight-backed stoicism after so many futile minutes, he will offer her a free pastry. She prepares herself to refuse, politely, gathering the proper hint of disdain on her tongue in preparation, no thank you, she doesn’t want anything free, she is the same as any other customer and expects to be treated as such.
But the waiter, balancing a sandwich plate on each arm, strides past where she sits, without a glance in her direction. 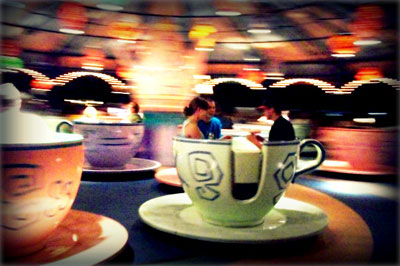