Logan peered over the sheer edge of the cliff and at the river of mist drifting through the valley below. The rising sun made the glacier behind him blindingly bright. The sun's radiant beams broke through the mist forming a pair of rainbows, which arched over the emerging panorama of seven rocky peaks, and stretched across the glowing horizon. A crunch below Logan's feet broke the serene moment. The sun had melted away more than the morning mist. Underneath him, the snow gave way sending him hurtling down the seemingly bottomless chasm of ice. As his safety rope became taut, Logan slowed to a halt twenty feet down the crevasse. The gasp he let out was not because of the fall. Through the ice stared a pair of inhuman eyes.
Examining those eyes on the long drive home, Logan observed that they were thin circlets imbedded in a shard of weathered wood. Brilliant blue with turquoise ripples, their long sleep in the ice hadn't taken the shine out of them. Carefully, he slipped the wooden piece, along with other fragments found in the surrounding ice, into a labeled bag.
Logan's van pulled into the parking lot of a run down inn. It was midnight. Not a star could be seen in the sky. The reception desk was empty but the door was unlocked. Logan could pay in the morning before he continued on his journey home. He pulled the frayed edge of the bedcovers over his head and instantly fell asleep.
The night's silence was broken by a woman's voice. It was completely dark but Logan could tell that he was in the river of mist. The cool humidity of the night air brushed against his skin. He shivered and she began to speak again.
' Damelahamid became such a huge city that people did not know their neighbors. The people became very confident again. All of a sudden it started to rain and the shores of the water changed. The people remembered the instructions that Simoiget Dam Laha, our Father in Heaven, had given to them. They had one Gilhast, the first totem pole of the Gitksan people. They cut it down and fortified their longhouses, their Dahks with it. They anchored them with ropes of hide and roots and barks of trees. The people became afraid and then a stranger appeared amongst them.'
When Logan woke up the next morning, the weather was fierce and a savage wind whipped his light hair across his face and into his blue eyes. Flashes of lightning lit the darkened sky. He ran to his van and turned on the radio. The old reporter's voice crackled with static as he spoke calmly from his warm, undisturbed studio.
' Canada's west coast is being hit by the worst rainstorm that it has seen in years.'
Some time later, as he reached the University of British Columbia in Vancouver, Logan turned off the radio. He was a climatologist at UBC and he thought some of his archeologist colleagues might be interested in the fragments of wood he had found while drilling ice cores in the glaciers of the Skeena River region. He would have left them if it weren't for the blue circlets that looked distinctly man made.

Jeremy, a young student in his twenties with dark hair and smooth features, looked up as Logan approached ' Hey Logan, how was the trip?'
'Great, look I found some fragments of wood while drilling a glacier, think you could identify them?'
Logan pulled out the fragments from his bag and Jeremy examined the thin circlets.
' These look like abalone, perfectly carved. If you hadn't found them in a glacier I'd say they were relatively new. Hmm, I'll see what I can do.'
Logan walked into his office and took out the ice samples. He was curious to see what his own tests revealed and sat down to face a long day of work.
The next morning, Logan slowly swung his legs out from under the covers and put them down with a splash. In an instant, he was awake, and realized that his entire floor was flooded. He went to call a plumber but no one was open yet. He picked up his soggy backpack and went in search of some rubber boots.
Logan prayed that the rain hadn't stopped Jeremy as he pulled into a UBC parking lot. He sloshed over a soggy lawn and stepped over the sandbags feebly guarding the entrance from the elements.
To Logan's relief, Jeremy was already there. He looked up to speak as Logan approached his desk.
' I got a good look at the fragments you showed me yesterday and they're definitely man made. The wood has been carved and smoothed on one side. It's yellow cedar and there are traces of paint on several of the pieces. You should take them to the image recovery project at the Museum of Anthropology'
' Sure, thanks man,' said Logan.
' Anytime,' replied Jeremy, ' Oh and there's something else, some of the pieces seem to fit together.'
Logan placed the fragments on his desk with gloved hands. He realized that Jeremy was right and that three of the pieces joined, forming a contoured dome. Looking down at the pieces spread before him, he began to see a pattern emerging.
Several days later, when Logan was finally done all his testing, the climatology results showed mass environmental disturbances at the time the fragments originated. He was confounded to find traces of pollen from all around the world frozen in the ice. Only one thing remained, the fragments. Only, they weren't fragments anymore. They had been unified into a single piece, carved into the shape of a face long ago. It was a mask. Carefully, he picked it up and walked out of the room. Part way down the hall, he heard a voice behind him.
' I have the carbon dating on the wood you gave me. It's over 3,000 years old! ' Said a young woman with dark wavy hair and soft eyes.
' Thanks Maya,' replied Logan.
Logan continued to the Museum of Anthropology. Icy rain clawed at his face as he stepped out and ran across to the museum, literally bursting through the entrance. A security guard led him down a ramp that brought them past the museum's great hall and off to the side to an out of the way door. Inside, he handed the mask over to a research staff member, who delicately placed it underneath an infrared lens, which would be able to see through the dirt and ageing veiling the mask.

As he walked out of the image recovery room and into the great hall, Logan examined the infrared picture of the mask. A rainbow crossed its forehead and raindrops ran down its cheeks. Or were they tears? The researcher had told him that it was painted with indigenous paints, black from charcoal, red with ochre, yellow extracted from wolf moss, blue from copper oxide, and green from copper oxide mixed with ammonia.
A familiar voice caught his attention. It spoke gently and clearly,
' And then a stranger appeared amongst them. He was called Waydetai because of his light hair and eyes. He brought provisions to the people in a bottomless box and told them not to run away. The waters had covered the surface of the earth. It is told that it was a whole year since it started to rain until, one day the people observed that two rainbows appeared in the sky. As the rainbows touched the surface of the of the earth, the waters started to recede. Hagbegwatku's Dahk, the chief's Dahk, landed near Damelahamid. The second dahk landed on the coast. The third dahk broke loose in a storm; we have no idea where it went. It is said Waydetai, the stranger who brought provisions to the people, continued down the Skeena River to look for survivors. '
Logan realized that it was the same voice that was in his dream. Amidst ancient totem poles and embodiments of timeless spirits, he walked into a crowded hall. He looked up from the picture in his hands to see the very same mask dancing before him. 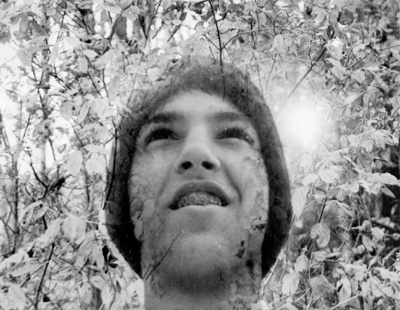 The author's comments:
My story is based around the legend of Waydetai. In the Gitksan nation important historical events are recorded and passed down through song, story, and dance. They are our Adawk. Adawk is owned by the Chiefs who are direct descendants of the historical figures. The story of Waydetai belongs to Chief Hagbegwatku of the Dahkumhast house and is of special significance to me because I hold the title of Waydetai. This story explains the distribution of some of Canada's Aboriginal peoples. While Hagbegwatku's Dahk lands near Damelahamid, another lands on the coast, and the Tsimshians come from this Dahk. Some believe that the people from eastern Canada, who live in longhouses, originate from the third Dahk, which broke away in a storm. The importance of Waydetai feeding the people from a seemingly endless box should not be missed. I believe it symbolizes Creator's unending nature. He provides for us in unending abundance and is always watching us, protecting us when we are faithful to his instructions. Another connection of Waydetai to the present is in the environmental issues that plague our world today. In Waydetai, Creator saved his people from the flood. Today it is our responsibility to save the earth, which has been entrusted to us, from the problems we have created such as climate change. I wrote this story in the present to show that Adawk still has meaning. I integrated the legend into the story to show it's connection to the past and the dancing to show that culture should be lived not preserved. Being a dancer myself, I found it very important that I include the dance in my story. I am part of my family's dance group, Dancers of Damelahamid, which embodies Adawk in its fullest form of song, story, and dance. I share Waydetai in its written format and have made some compromises to convert it from its original oral form. The mask, which takes shape throughout the story, is a symbol of identity. Many young people today search for identity. Adawk, through its connection to the people and its teachings gives identity and purpose, which would stop the suicides and depression, which plague our people. Simgeeget, Sigidemana'h, dethwemsem Simgeeget; I have a story to tell, thank you for giving me a voice.
Post a comment
Submit your own