“It is the morning of September 8th, 2008 in New York City,” the reporter said blaring from the flat screen. As she began to prattle on about the headlines, announcing the brand-new government bailout of Freddie-Mae and Fanny-Mack in the bust subway station, a man dressed in dark denim jeans and a black button down dress shirt hand his heavy boarding pass to the attendant. As Guy takes his usual place among the others busy to be on their way this morning, he notices a lady dressed in a light grey dress suit muttering into her Bluetooth headset as if she was talking to herself; a grayed man holding a cane nervously awaiting his stop; two nurses holding cups of not-so-fresh coffee whispering to one another; a young lady with a violin case busily studying music while listening with her ear buds causes him to pause for a moment before continuously searching the faces of others. A middle-aged man with a plump belly bulging over the top of his faded jeans and a sweatshirt angrily squints around at others in his huff; a young black man slung over a girl chewing bubble-gum bopping to music. A mother intently keeps looking at her cell phone while keeping a firm grip on her little boy. A bell rings and they halt to a stop where the confusion begins again.

As Guy turns the key in his corner-shop a few blocks from the station, he notices something about it that he didn’t notice the night before. It still smelled like cinnamon and coffee grounds with the crisp fall breeze bursting through the door with him, but written in big letters across his chalkboard wall was the word Corporate, downsizing with each letter. “Just another day in the recession, just as ABC said this morning,” he mumbled to no one. As he flipped on the illuminated Open sign he thought more about the young lady with dark long hair and the violin case he had seen on the subway. He mused about what she might have been going to. Maybe she was the best violinist in the entire world; maybe she had just been offered a concert season as concertmistress of the New York Philharmonic. Maybe she was escaping everyone who had loved her to pursue this music. Maybe she has a child at home waiting for her to come home. Who knows if she was even married? He purposed to himself that he would look for her again tomorrow to determine if she had a ring on her finger or not. A jingle alerted him back to reality where he began serving different brews of mild hazelnut to dark chocolate silk espresso. Photographers and journalists come and go throughout the day, observing the rebuses drawn by others on the chalkboard and adding their own to this beautiful mess. Their lives seem perfectly fit together, compared to HIS.

The next morning, as hard as he searched on the subway, he could not find the young woman with the violin case. The old man with his cane was there, as he had been for the last three years. The reason for his unusual nervousness only made him more of spectacle. Perhaps his wife was dying of a terminal disease and he was going to visit her; maybe it was a lover from long ago. Perhaps he was afraid of the moving subway, Guy mused as he huffed to himself, alerting the stares of others around him who inched away from him. Perhaps this old man was some sort of loony who just rode the subway all day. Who could ever know? Maybe he was a convict escaped many years ago who disappeared. “Yes, that must be it,” Guy thought. That would be what lay behind those evil eyes of a man who had no business being here. He must have murdered his pregnant wife, but had escaped before he was convicted and disappeared into a world of strangers. He could have no friends, for they were all his enemies by nature of the law. The more time passed, the lonelier he became and the more he wished to turn himself in. The only cure for this sick-minded man was to kill yet another from this world. As Guy thought these malicious words the old man began to cough and sputter causing Guy to stare bizarrely at him. After the man’s fit subsided, his stale glare met Guy’s. In that instant, Guy got an alarmed look on his face and began to fidget in his seat. Guy assured himself that he had this man figured out, and he was going to be found out, whatever the cost of justice would be before someone else had to pay for his depravity. In spite of what he told himself, he took a rough notebook out of his messenger bag and scribbled the words “He hates me… he loathes me… he is going to MURDER me…. I am his next!!!!!” The buzzer sounded, and he jumped in alarm and rushed off to “The Coffee Break” for another day.

Guy stayed as far from the old man as he could every morning, to avoid the coming turmoil. Days continued to pass, but the young woman with the violin case, he never saw. One night as he was sitting on his floor in his 8th floor apartment sipping hot ginger tea, he decided that if she was too afraid to show her face, she must have deep secrets to hide. She must have a child. A son. Who, because of her stupidity, will never have a change to grow up with his father? She has already failed him before his life has really ever started. She dumps him off every morning with a sitter so she can forget about him along with her mistakes and carry on in her career as a violinist. “No matter how hard she tries to hide it from the world, she could never hide it from me!!” he said.

Today is Thursday. He closed the shop early this morning and rushed home to complete his new short story profile about the New York violinist that had to be submitted to his Times editor first thing in the morning. The New York Times is anxiously awaiting this short story collection entitled “The Lives of a New Yorker.” The lamp became hot on his nightstand as he sat in bed with his computer on his lap. The sun began to lighten the sky to a shade of dark grey and he turned over on his pillow and drifted off.

Sunday is his late day at The Coffee Break. At a lazy nine o’clock, he flips the switch on his Open sign the same as he has done every other morning and he begins his routine of roasting, grinding, and brewing. Gradually, things outside begin to liven up. Obnoxiously, the bell jingles at the door and in walk the two women he tries to irritatedly ignore most mornings on the subway. “Of course they wouldn’t recognize me. They are too absorbed in their little worlds that consist of nothing more than a routine uniform and job,” he muses. After serving them their drinks, both tall almond macchiato, they retreat into a corner where they put their heads close and giggle. All the while, Mr. Guy Ruiz watched them; suddenly intrigued with the lives they held. He grabbed his laptop and sat down at a stool across the counter and began to write. “The lives of two women… ones I despise… they come together in an intimate love for one another. They crane their heads towards one another, deeply in love with each other…”

Awakened from his writer’s trance by the jingle of the bell once more and the heavy steps on the floor, he slams shut his laptop and begins to serve up more of his coffee. As he snaps on the lid of each espresso he growls at them, “did you want cream or syrup? Cause it’ll cost you extra!!” Not realizing enough to even care, he angrily continues on with a furled brow. “What kind of man would choose to live like this?” I scribbled onto my notepad. “He lives as if he hates all of the world. He is a praised author and barista of a leading coffee shop in New York City. What more could he ask for?” I wonder whom he has to go home to every night.

I am a journalist for the New York Times hired to write about Mr. Guy Ruiz’s upcoming new release. I have been following Guy for the last couple of weeks and I came to interview him this morning, but he looks to be in a particularly bad mood today. Progressively, he has gotten more and more “interesting.” I hear he used to be quite a social type. In college, he was a successful cellist who attended to Curtis Institute of Music, but when his dearest Genevieve left him to follow her promising career as a violinist, he became a bitter and lonely man. After graduating from Curtis, he moved back to his hometown of New York City. The people there had changed, and didn’t know him anymore though. That’s when he opened “The Coffee Break.” The people that he is surrounded by now, the people he sees every morning on the Subway, or the people that come into his coffee shop could be his good friends if only he would give them a chance. His parents died when he was only fourteen in a car accident, and all that he had to carry him through was his music.

It is now August of 2009. Some time passed, and his book was released. Although he was successful as both an author and as a barista, success cannot always last forever. The recession has caused many businesses to close and people to go bankrupt including Guy Ruiz’s coffee shop. Guy has become an alcoholic who works as an author from a smaller apartment. Who will anyone ever remember him as? When he dies, will anyone care at all? Or will he be remembered as just that one barista at The Coffee Break who cared for no one but himself? 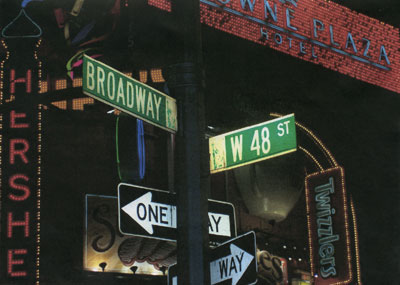