“Yes?” the witch had delicate fingers, touching the girl's face.

A puff of green smoke was released into the air, practically suffocating the little girl's lungs. But now, her world went so black she knew fireflies wouldn’t be able to get her out of her darkness.

“I don’t understand!” the girl yelled, throwing a china tea set onto the floor. It had been ten years since she made that wish and now she was going to marry the Prince of Silverwood.

“I’m only sixteen. How could you do this to me?”

“It’s to keep peace in case of war! You know this is very important.”

Chantria refused to listen and stormed off with her hands still dribbled with blood when she threw the tea set on the floor.

“Be careful with your hands! You’re going to get it on your dress!” the father yelled across the hallway. Chantria didn’t care and rubbed her hands across her white dress which was now smudged with red like a piece of abstract art.

Back in her room, Chantria lay with eyes full of tears and rage flowed through her like steaming, fresh lava. Sadness engulfed her whole and a void sucked her joy down into pieces. She picked up the portrait of Prince Felix of Eversun and held it close to her, almost breaking the glass from the tension. She touched his cheeks with her delicate, red-soaked fingers, and tears spilled onto his portrait.

“One day,” she whispered to the portrait. “One day.”

She lie there and felt all the stars fade into the blackness, all the shimmering lights die down, all the beautiful dandelions break away granting no wish, and she felt herself lose the light that once sparked in her young self. The silence was shattered by a knock and a creaking sound.

“Who is it?” she sniffed, trying to hold back her tears.

“Princess Chantria? I have a message from your father,” a sweet voice said and she bounced out of her bed to open the door. “Yes?” she answered sweetly.

“Prince Amir of Silverwood is here to have tea with you. Your father is asking for you to get ready,” the maid said to her with a voice so soft it could melt in one's hands.

“I’m coming soon. Tell him I’ll be there in ten minutes.”

Chantria heard the clicks of the maid's shoes and rushed over to get her dress ready. “I must act like the devil!” she told herself. Her cinnamon-colored hair rolled down to her chest as she put on a deep-colored red dress and heavy makeup. A roll of confidence washed over her and so did the feeling of revenge.

She held her dress with her head held high as she met Prince Amir. He stood up, awed by her looks. “You look dashing today, Princess Chantria.”

She scoffed and went to the table. He held the chair for her, but she swatted his hand and sat down herself. “I can assure you I’m very much capable of sitting down on the table…” a silence washed over for a split second before she opened her mouth again, “by MYSELF!”

“I’m sure you are, Princess! I was just trying to be nice!” his face was shading colors of pink and Chantria could only laugh at his looks.

“So, are you excited about the wedding tomorrow?” he asked. Chantria stared at him for five minutes before she opened her mouth, “no.” That was all she said before she got up and walked away, “I’m sorry Prince Amir. I’m not feeling well. I’ll see you tomorrow, okay?” A hint of sass was found in her tone, something that pleased her very much.

“Of course, Princess Chantria,” he replied back still flustered by her gorgeous look.

“And, while you’re at it,” she turned around and looked dead into his eyes. “Find another reason to love me. Not just for my looks, okay?”

He was silenced after and walked away. “It was a pleasure to meet you, Princess-”

“Oh, I know!” She smiled a wicked smile and walked away. Pride filled her chest as she walked past her father. “How was it dear?” he asked. “Haha! I think he hates me even more now!” She tried to hold in her laugh and walked off, seeing her father's jaw clench tightly and a storm rumbling inside of him.

Back in her bed, Chantria looked back at the portrait. His face twinkled and his eyes were like the moon. His mysterious gaze always overtook her. Three years earlier they had planned on getting married. That was until Prince Amir was introduced to them and Chantria ran away from home only to be found a year later.

“Chantria,” a soft voice flew into her ears and she jumped out of bed to her balcony to see Prince Amir standing on her balcony. As the moonlight filtered through his hair, his sleek black suit was snug around his body. It made her heart rumble to see him smile and see those moonlike eyes. As soon as she saw him she tightly hugged him and warmth flooded her whole body. She was in love again. The moment their lips met, she had to hold on to it no matter what. They were overcome with love, unable to escape. Their love. Too beautiful to end.

“Chantria. I will attend your wedding tomorrow. But, please, be happy,” he said in his soft voice.

“I won’t let this happen!” she said in a raspy voice. She cleared her throat and continued, “We’ll run away!”

“We can’t do that, Chantria. Do you remember what happened last time you ran away?”

“I will never leave you.”

His soft hands touched her face and he leaned down to kiss her cheek. It had been a long time since she felt this feeling again. “One day. One day you will get married,” she said in the silence.

She missed the simplicity of life and would do anything to gain it back again. Every day she looked at the stars and wished that she and Prince Felix could live a simple life. They would run a bakery in a small village and look at the stars every day past their bedtime, and they would hold each other and never let each other go. They would hold each other's hands and let the love burn inside of them because they were the igniter of the other’s fire. A love so beautiful. A love that could have happened. A love that could have happened in a simpler life. He let go of her hand and climbed down to the floor. Chantria went to sleep, submerged in pain.

It was now the wedding day. Chantria looked at her wedding dress. A clean white color with a veil itching her arms and her dress tightly pasted to her body. Her father was in tears looking at her with innocence but she looked at him with an evil glare. She looked at Prince Amir’s smile which disgusted her. She looked back at Prince Felix and smiled at him while he smiled at her, but their eyes once firing with innocence were now ruled over by reality.

“I hate you,” she whispered to Prince Amir.

“It’s not my fault,” he whispered back.

“All hail the king and queen!” the audience yelled as the doors to the balcony opened up. But, Chantria didn’t look at the people. She looked at Felix again, her breath lost and her mouth at a loss of words.

She remembered it all. When she was little she would make drawings of pink castles and badly drawn horses with her and a prince on them.

“Daddy! One day we can sleep in a fancy bed and have fancy food and play all day!” she would say. Her dad smiled at her and told her that she should love the life she already had. Now she yearned for the days when she lived a simple life. Her face was swollen with pain as she smiled back at Felix. She felt like she was drowning. Because her life had been a struggle of walking on thin ice and holding on to the fire, trying to stay alive, and now she has broken through it. She let the coldness of reality burn her to pieces as she drowned. The fire she was holding was now burnt out. Memories flooded back

“Yes?” the witch had delicate fingers, touching the girl's face.

A green puff of smoke was released into the air, practically suffocating the little girl's lungs. But now, her world went so black she knew fireflies wouldn’t be able to get her out of her darkness. She would no longer be able to escape her darkness. Because now, she realized the only kingdom she wanted to rule over was her life. 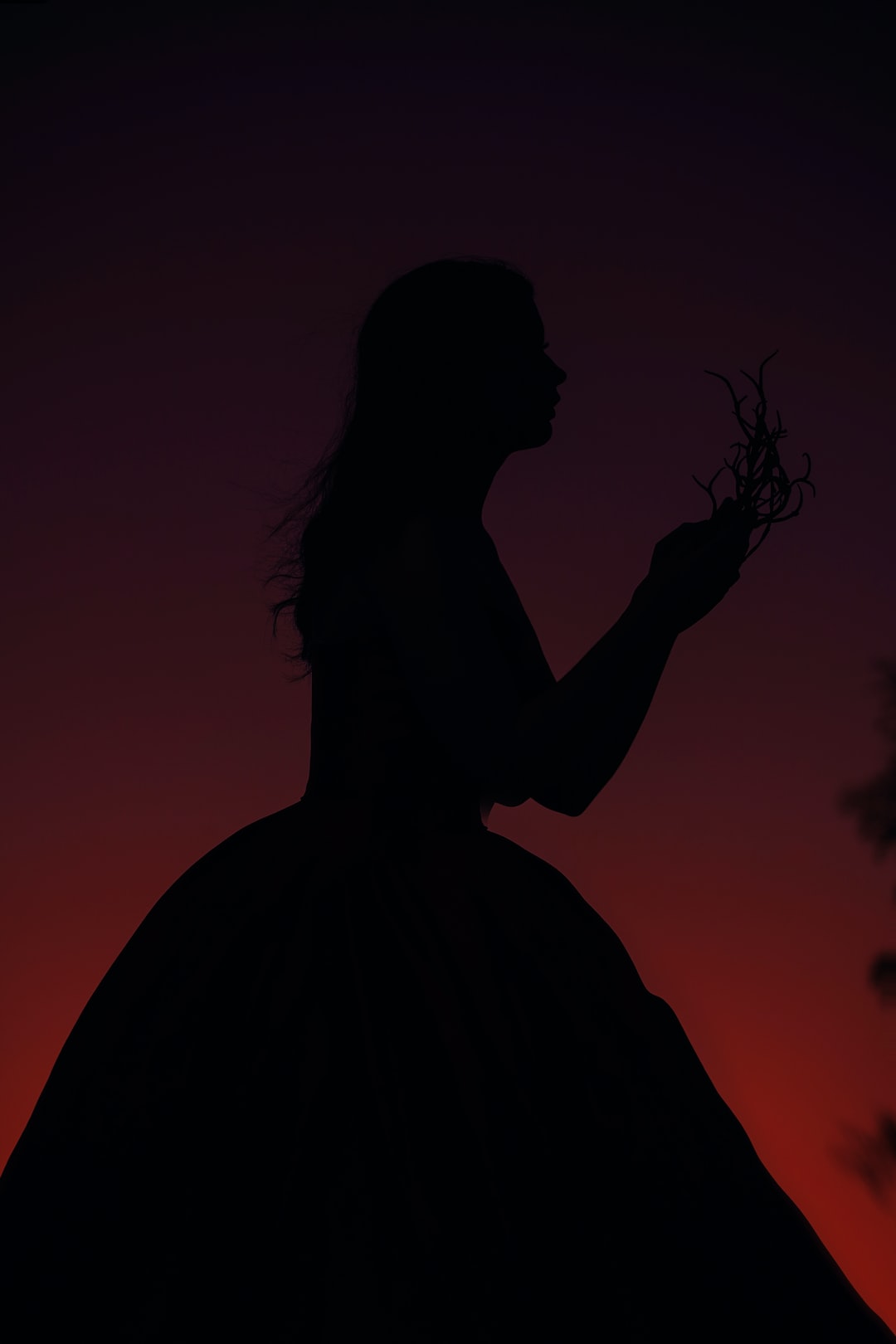 Photo by Miguel Gonzalez on Unsplash