The Not So Little Mermaid | Teen Ink

The Not So Little Mermaid

I see her. It’s Ariel, from The Little Mermaid. Except now she looks so different from how she looked in the movie. Her hair that was once such a brilliant red now has streaks of a dirty brown color that reminds me of mud. Her hair is also coarse now, like that of a person who has dyed their hair too many times to count. The smile that once graced her face is replaced by a grumpy pout and instead of seeing her brilliant white teeth between her lips, there’s a stubby cigarette constantly spewing rings of smoke into the air. As I continue to walk down the sidewalk, I notice that her wardrobe has also changed. Her clothes consist of an extremely short denim skirt and a tank top that’s at least two sizes too small and exposes her flat stomach. Her eyes, that were once as blue as the ocean she came from, look glassy and any kind of light in them has diminished. There are bags underneath her once sea blue eyes, signifying that she hasn’t had a good night’s sleep in days. The overpowering smell of smoke and alcohol cloud the air around her, causing me to cough and my eyes to water. How she can stand the stench, I have no clue. Just as I walk past her, I can’t help but stare. Even in this degraded state, the once-mermaid princess still looks beautiful. Ariel notices my gaze and gives me a hard stare.

“What are you looking at kid?” she asks in a voice that sounds like gravel. “Haven’t you seen a girl sell herself on the streets before?” I felt the heat rise to my cheeks and I quickly shake my head. The red-headed princess gives me a disbelieving look before taking her cigarette and flicking ashes onto the cold asphalt below our feet. “How old are you now?” Ariel asks, a delicate red eyebrow raised.

“Sixteen,” I stutter out. Her expression becomes one of disbelief and she snorts smoke out of her nose in surprise.
“You’ve got to be kidding me,” she rasps. When I shake my head, she lets out an exasperated sigh and covers her face with one hand. She mutters something under her breath before looking at me again. “I’m guessing you don’t get out much, do you?”
“Not really…” I nervously bit my lip, anticipating her reply.
“Look kid, bad stuff happens and you can’t nothin’ about it, right?” Before I can answer her, she cuts me off, continuing her little speech. “Wrong. You just gotta ignore it and pretend it never happened.” Ariel’s eyes are flashing now, her voice getting louder with each outburst. “Course it’s never easy because you might’ve just so happened to give up your voice to be with the man you loved. Then after a near death experience, you get married and you live happily ever after, correct?” she asks, glaring in my direction now. I’m frozen to the spot by the malice in her gaze. “Nope. He cheats on you and before you know it, you’re on the streets, selling yourself to strangers just to get by.” Ariel’s voice is a throaty growl now, and I’m shaking on the spot. I don’t understand what I’ve done wrong to upset her so, but I have a feeling I know what she’s talking about.
“You’re talking about you and Eric, aren’t you?” The words are out of my mouth before I can even stop them and I instantly regret it. Her eyes flash with pure hatred for a moment before they cloud with sorrow.
“It’s hurts so much…” she whispers, her voice cracking with grief. I’m at a loss for words right now. I have no clue how to help this now deranged princess. Before I can even comprehend on what to say, Ariel speaks.
“Don’t end up like me kid,” she growls hastily. “Try to not be as naïve as I once was, but try to keep your innocence all the same. There aren’t many people like that left in the world.” She turns and in flash of red, she disappears down an alley, leaving me feel completely and utterly bewildered. 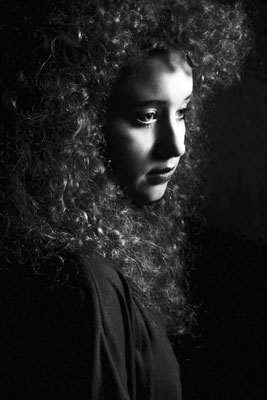 The author's comments:
This is a kinda weird piece of fiction that I had to write. the prompt was to write about a childhood character doing something completely out of charaacter. So this is what I though. Some deranged little mermaid on the streets. :p
Post a comment
Submit your own

View profile
Thank you ^^ And I will be sure to start on it right away so I can post it here. :3
bunbun74 SILVER said...
on Jun. 10 2011 at 10:17 am
bunbun74 SILVER, Fort Collins, Colorado
6 articles 0 photos 36 comments
View profile
Yay! Thats so cool :) i will look at your work when you contribute from now on! I'm really interested to see what you do with this. Good luck! Can't wait to see Cinderella's story!
Silverfeather SILVER said...
on Jun. 10 2011 at 5:59 am
Silverfeather SILVER, South Plainfield, New Jersey
8 articles 0 photos 5 comments

View profile
Thank you ^^ I really apperciate the comment I never really thought of writing a little series sort of thing. It was just a prompt I was given to do for my Creative Writing class x3. But now that you mentioned it, I think I will. I can already see the one for Cinderella now... She's not going to be selling herself on the streets though XD