There once was a little boy, with big dreams, bright eyes and a certain lightness in his stance. No matter how many people told him he couldn't make it, that his efforts were in vain, he didn't give up. He tackled each problem that life threw at him, and made it through with only minor scars that would disappear over time.
Gleaming medals were awarded for his show of bravery. He was applauded and cheered on. Yet, the boy was not satisfied with himself. He yearned for more more more. He wanted to prove his strengths were limitless and so, recklessly he soldiered on until he reached the hardest task anyone had ever undertook. His pride pushed him further still, unhappy until he reached his breaking point. The boy had lost his smile along the way.
None the less, his stubbornness payed off once more. Again he was rewarded. He now found himself at a crossroad, drained and lost. Unsure whether he should keep marching on, for medals he didn't particularly care for, or if he should step back to finally rest and admire all he had already achieved.
He was oblivious to precious gifts life sent his way, and refused to listen to advice, certain that nobody could possibly understand what he had endured. How could they after all ? He was the one who bore the marks of valor. He was alone against the world. Or so he thought.
This little boy was no longer little. He hadn't realized how much he'd grown, too absorbed in his pains to take time to enjoy his youth.
On a cloudy day, he found himself sitting under a willow tree. Two paths had presented themselves and there he was, unable to choose which would lead him swiftly to greatness. He was tired of fighting. He simply wanted a road to lead him towards a peaceful and prosperous future. As he pondered in vain the mystery, searching for an easy way out, when in truth there actually was no right or wrong answer because each road, whilst different in its own way would eventually pay off, an old owl landed on a branch near his head.
He inquired as to what the bird wanted from him, to which it replied, “Nothing, young man. I am simply admiring the view.” Perplexed, he asked why the owl had chosen such a spot to rest. To him, it was a hell like place, ugly and unworthy of admiration. The wise owl hooted at the boy's silly remark. “You won't go far if each time you are faced with a decision you stall. Pushing it back will not make it disappear. You'll simply go crazy, and when you aren't in a sane state of mind how do you expect to make a rational choice ?”
Our young man argued that there was nothing reasonable about his tricky situation, for he couldn't tell what lay behind the twisted paths and beyond, far off where he could not see. An idea then grew in that erudite brain of his. “Owl, you can fly and observe things I cannot. Go see what is at the end of each road and report back to me. Then, I will finally be able to march forwards with certainty that what awaits me is worthwhile.” The bird, feeling rather pained for this lost boy, did so. However it was too cloudy and his sight was weak due to his old age. When he returned to the willow, the boy shot up excitedly. His eagerness left no room for doubt about the success of the creature and he interrupted the owl before it could fully explain the situation. Annoyed, it decided to simply comply to the young man's questions by making up a tale that would satisfy him.
“If you take the path that leads west, you will face many troubles along the way to achieving greatness. Your whole life will be one filled with hardships but they will be made up for with love and support. In the end, you will have lived a successful, plenty life, surrounding by people who admire you.” The owl continued, “If you go east, you will be powerful and venerated. You will have money and respect. Your loved ones will still support you, yet you will steadily grow distant from them. If you take this path, you will have owned everything a man could possibly desire in life, and amounted a large fortune. You'll be remembered by all as a winner.”
The young man was tempted by the second option, it was after all, what he had hoped for. However, he still remained unsure. Both paths had their virtues. He was still deep in thought when the bird flew off, leaving him alone once again. He remembered a saying he had heard long ago, by Henry Thoreau, “Go confidently in the direction of your dreams. Live the life you have imagined.”
And so, he gathered the remainder of his strength, and marched straight on, forging a new road between the two worn ones. Because he wanted everything in life and had what it took to make it. 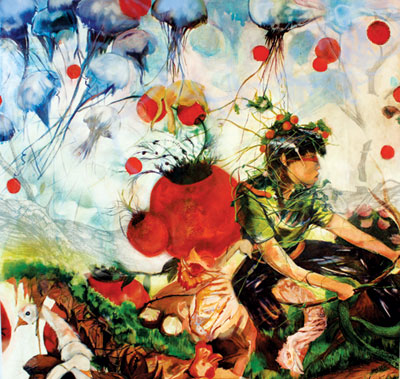 The author's comments:
This short fable is for my brother, who might feel lost at the moment, but I know will do great things in his life.
Post a comment
Submit your own