Far beyond the grasp of justice
Far removed from human pain
Coldly scheming, cruelly killing
Hatred is his only gain.

Desperate thoughts
Desperate actions
A bounty is placed
The hunters move in.

One man remains
One from the rest
Whose skillful blade
Rends fiendish flesh.

Suddenly his crime is paid for
Instantly, his soul undone
Celebrations, Hell awaits him
Joyfully they praise the one;

Praise the one who ended it

Ended the terror with death.


Anxious. I stand outside of a plain brick building on the edge of town. He comes to the door. Suspicious eyes- a natural trait, I suppose, considering his profession. Then he steps out into the sun.


“Yes.” I wait awkwardly until he speaks again.


“You’re some kinda scholar, right?” he says, his expression unreadable.


I nod. He gives a sudden laugh then stops short. “Hope you’re better than the last one.” He doesn’t elaborate.


I say nothing, tracing the cracks in the stones. He laughs again. “You don’t talk much, do you? Alright then, I’ll go get my coat.” He pauses. “Oh, and you can call me Forrest.”


I remain, taken aback by his abrupt nature. He returns with his coat and a walking stick. “All right, let’s go. May as well get this over with.” We walk to the nearby trailhead, or rather, I try to keep up as he strides on ahead.


“So, I’m gonna be your tour guide this evening,” he says in a mocking tone as we enter the woods. “A tour of the final desperate hours of a criminal’s life,” he adds dramatically. He grins, frightening me with his intense expression. “You would not believe where that guy was hiding.”


We press on deeper into the woods. It’s unusually cold for a summer day, and the dense foliage allows only a thin, gloomy light to shine through. Deeply unsettled, I examine the man who calls himself Forrest.


Leaves rustle, and a squirrel scampers into our path. I see a blur of motion beside me as Forrest flicks a knife through the animal’s head. The incident arrives so suddenly that before I can even react to the initial disturbance, Forrest has tossed the furry corpse aside and continues on his way. Stunned, I follow.


He shrugs. “You pick these things up after a while.” He again refuses to elaborate, and I remain awestruck as we stop next to the sluggish, murky river.


“This is where I found him,” he says, motioning to the sloping riverbank. “Up there, you see by that log?” He points to a massive fallen tree hanging precariously on the edge of the steep bank, probably thirty feet above the water.


“There was no log back then, of course, but he had dug himself a little hole in the mud. Like a rat in a hole!” He chuckles, clearly enjoying the thought. “So that’s where I found the b******, and that’s where he stayed.” He laughs again, causing my skin to prickle. “I got that little rat in his hole. I got him.”


He starts to hike up towards the log. I follow carefully, trying not to slip in the mud. Something about Forrest bothers me, something about the way he moves, his piercing eyes. Perhaps it was the way he killed the squirrel- a lazy flick of his fingers, and a knife suddenly appeared in the creature’s skull. Was that how he had killed the man in the hole, all those years ago? Yes, the man in question was a notorious villain, a murderer and a thief, but had Forrest merely flicked his fingers and left him to die on the riverbank?


I’m filled with unease as I clamber up the bank to where Forrest stands waiting by the tree. He watches me curiously, watches me with animal eyes. Then he turns and motions me to follow.


He walks out onto the log, scanning the mud wall of the riverbank as he balances with ease. I try to follow, but struggle on the slippery wood.


“I’ve found it, come here, I can show you!” he says excitedly. “Come up here, you can relive history!” His last words bear a mocking tone, along with something far more sinister. I glance up at him only to meet his bright eyes, hunter’s eyes, staring at me.


“Come here,” he repeats, quiet and measured. “I really would like to show you...” He walks back along the log towards me, holding out his hand.


I see only his fingers. Knife fingers, deadly fingers, fingers that kill with the slightest effort. I back away, pushing hard on the log as I stumble and fall onto the bank. His eyes grow wide, he opens his mouth to say something- then the log teeters and crashes over the embankment, pinning Forrest beneath as it tumbles into the river. A massive splash, then silence.

I sit in the mud, incapable of movement. Finally, mind completely blank, I stand up and walk down quickly, away from the river, taking care not to look at the fallen tree resting in the shallow water. Twenty paces back along the trail, I stop. Should I run and get help? Should I hide in the forest? Suddenly, I am overcome by a strange desire to return to the river.


When I arrive, all remains unchanged save for the giant tree now sprawled haphazardly across the river. No noise can be heard save for the slow drip of water somewhere nearby. A walking stick floats on the surface, knocking gently against the rough bark of the log. Squinting through the mottled light, I imagine a dark red shadow spreading through the water; those cold, drowning fingers, clutching desperately for air as the ripples fade to nothing.

Uncertain thoughts
Uncertain actions
A dead man is found
Crushed under a tree.

Terrified he flees the hunters
Desperate, backed against a wall
Clumsy knives in trembling fingers
Slashing, killing lest he fall

Finally his guilt transforms him
A stealthy killer, once the least
Striking out with cruel abandon
Towards all that threatens, man or beast.


In dark woods
Near the bloody waters
New footprints mar the wicked earth.
A hunter stands in shadows, watching,
Waiting for his time... 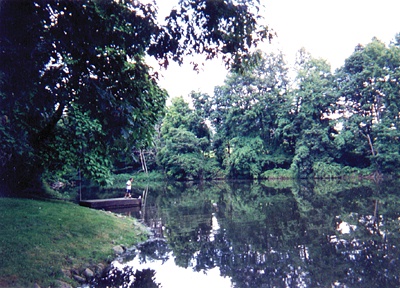