Water dripped steadily from the foliage, each leaf weighed down with the heavy rain. A figure stood motionless in the shadows, the green of his cloak blending perfectly with his surroundings. Very carefully, with the air of someone who wished to remain undetected, he brushed a finger across his lips.

The others recognized the sign. They knew it to mean complete silence, and that the maker of the sign intended to do something drastic. They watched their companion intently, wanting to add their assistance but knowing it was forbidden to do so.

A single raindrop fell from the sky, landing squarely on the silent figure’s blonde head. His pointed ears twitched once, and then he reached his hand behind him to grab hold of the bow that was slung on his back. His slender fingers nocked an arrow with ease, and in a matter of seconds it had found its way into its target.

The scream of a dying beast landed harshly on the figure’s ears. He felt the scream deep within him, as if part of his own heart had been sheared off. He did not want this. It was a cruel end to the last of the world’s beauty.

For a moment the beast struggled in a pathetic attempt to flee, but it had already lost its strength, and it lay still in the circle of trees, its white coat marred by the bloody wound. It was only until the last breath had shuddered from the beast that the figure stepped from the shadows, revealing himself.

His first steps were tentative, as if he was unsure whether the beast was truly dead. He could still feel that place where its scream had pierced him. It was as if the beast still lived, existing even in death.

Reverently the figure knelt beside his kill. With a practiced hand he laid his open palm against its still warm forehead. He was struck immediately with a range of emotions. Fear. Exhilaration. Pain. All of the things the beast had felt in its last moments of life.

“It had to be done,” one of the elves spoke up. She was the first to break the silence.

With the broken silence came the permission for the others to draw forward. They threw their hoods back in unison, approaching the beast and the elf who had slain it.

They formed a wide semi-circle, giving room for the elf to continue his work. He knelt with his eyes closed in a kind of solemn trance. The beast continued to pulse slightly, the life-force that had been contained in it draining through the elf’s open palm.

The silence set in heavily again as the elves watched their companion perform his task. This, they knew, was their last important duty. And though it seemed a heinous act, the slaying of the unicorn would bring about a lasting salvation.

The elf’s eyes snapped open quickly, his task finished. He looked around at the group, nodded once, and then lifted the unicorn onto his shoulders. Without a word he made his way to the edge of the clearing, the others trailing behind him silently.

One by one the elves entered the trees again, melding with the darkness and throwing their hoods back over their faces as they began their journey home. 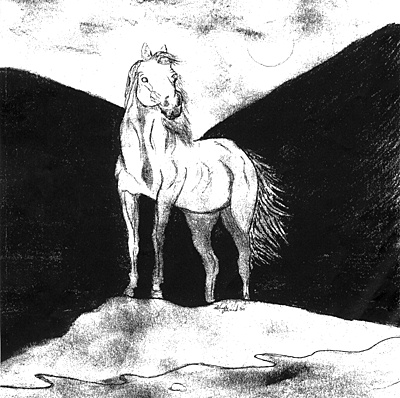 View profile
This is an excerpt from a novel I am writing. My hope is to turn it into a trilogy.