Thesun set when their backs were turned. It fell beyond the rim of the trees andhesitated. The orange fire, tendrils of the setting sun, faded slowly that night.Long after the ceiling of the sky was dark with broiling clouds, the horizon worebright colors. Around eight o'clock the warmth had drained from the sky, leavingit gray and blue, pale colors in a cold night. She was glad of her jacket, butthe cold crept beneath it. It slipped through the bottoms of her shoes andstarted her shivering. Sarah turned from the sky and stooped to enter thetent.

Daniel looked up. A commonplace thing, but he always smiled when hesaw her. Sarah thought it was the sweetest thing in the world when he smiled ather, his eyes remaining on her face as though he were searching it for aclue.

She found a cup of hot cocoa on the little table.

"Isthis for me?" she asked.

She lifted the steamingchocolate, her twelfth cup in three days. It was unusually cold this fall.Normally her hikes were during the heat of August, when the crickets chirped andthe grass was still green, but this year the ground had been heavily frosteduntil late morning every day.

Daniel lifted the cup from her hand andsipped, looking at her over the rim. His eyes reflected hers in the lamplight.Sarah settled on a pillow on the ground. She took the cup again, and drankslowly. Silence hung in the air. They both knew their time together was almostover.

They'd met four days ago. Dan had been roasting marshmallows on topof Mount Marcy, while Sarah was sneezing her way to the peak. She came upon Danwith a particularly loud "Achoo!" and he introduced himself with a boxof tissues. They quickly became acquainted and Sarah had joined him by the fire.Dan had blown out his fiery marshmallows several times, but Sarah turned hers tothe perfect shade of brown.

Sarah was used to camping alone. For the pasttwo years her friends had all been away in August, so she'd packed her cell phoneand set out for the mountains. She did this every year before classes started.The mountains were where she had fallen in love with nature. She had neverbrought any of her boyfriends along. Josh, Matt, Andrew ... they'd neverunderstood how she could spend so much time looking at the skyline, the trees andrare wildflowers.

Her last relationship had turned sour. Michael hadinsisted that he come with her. It wasn't their first fight, but it had been toomuch. She could stand it when they'd argued over where to go or whose friends tosee, but her hikes were hers.

"You're my girlfriend. Why do you wantto go alone?"

"Yeah, but you'venever gone hiking there before. It's dangerous for a girl likeyou."

"Well, if all the prisonersescape Dannemora and come hide in the woods, you can come get me.''

"Why don't you say it again so I can explain how crazyit is? The most dangerous things up there are the deer! Besides, I can take careof myself."

"I think I should come."

She turned andwalked away, weaving through the parking lot.

The night before sheleft he called. "Sarah? I'm sorry."

After six days in the woods, shewas glad she'd hung up. She felt as though she would do anything to stay here andavoid going back to the artificial world.

She looked around Dan's tent.Nothing there spoke of his personality. The bags of food, clothes, maps andnecessities didn't fit him. She thought he was comparable to toothpaste: cleanand fresh. He even had the perfect "Crest Kid" smile.

Herglance fell on the coffee mug next to his toothpaste. He didn't use it forcoffee. He drank chicken broth. She wanted to laugh at the thought but couldn't.It would be like laughing at a rock, or the sun, or anything indifferent to theworld's opinion.

Daniel saw the smile that she had given to

"Oh, just thinking how much you remind me oftoothpaste." He laughed, tilting his head back so his teeth glinted in thelight.

A little bell at the counter sangout to announce another customer. Sarah barely turned her head. The coffee shopwas full of people coming and going. Several sat at tables as shedid.

Sarah tugged at the flannel shirt she wore. Purple and brown plaid,it reminded her of the one Dan had let her borrow two months ago when she hadaccidentally put her pajamas in with the bag of food to be strung up on the tree.When she had seen this shirt in the mall she bought it. Now, sitting at a tablein this little shop, she smoothed the fabric again. Her pen was poised over thepaper, but soon her hand rested on the table, and her face turned to thewindow.

Northern California was cold and bright. Forty miles away, in acoastal fog, Sarah's aunt and uncle's house looked out to the ocean. Sarah wouldbe visiting them for the Thanksgiving holidays. In less than an hour she couldunpack her bags and stretch out her stiff legs. She was just passingthrough.

When she'd seen the welcoming sign to the town, her heartbeat hadquickened. Dan lived near here. Feeling foolish, she stopped to buy a donut andrest for awhile. She hadn't heard from him since August.

"Can I haveyour number?" she'd asked.

"I don't have a phone." Helooked sheepish. "Want to write?"

"We should make a date."

But when?And how if he doesn't have a phone? Sarah had wondered.

"Here,"he scribbled on a piece of paper. "This is my brother's number. He owns astore in Marin, sells lemonade and peanut butter cookies. Y'know, that kind ofthing. He's a great guy, and he knows where to find me.Okay?"

The door swung shut. The man behindthe counter spoke. He wore a blue denim apron and a red chef's hat. "Hey!You waitin' for someone, Miss?"

"Ever been here before?"

Outside the window emblazoned with Bob's Bakery, Restaurantand Wine Cellar, evening was coming. Soon it would be dinner time. The same pizzadelivery car had already gone past three times. Traffic was heavy, with thenine-to-five workers heading home, families going to dinner, and students headingto their Friday night hangouts.

The door clicked shut again. Sarah tookher attention from her surroundings. She wanted to see Daniel again. Maybe shecould call his brother when she reached her aunt's house. She hadn't been datingmuch since she got back from the mountains. She supposed she was too choosy, butmaybe that was better. Her last break-up, with Mike, had annoyed her, and shewanted to avoid repeating it. It would be weird calling Dan's brother, but whatif she never saw him again? What if she never met anyone else like him? Sarahmade up her mind.

She looked out the window again, reading the gilt letters backwards. From thelooks of the barrels and wine racks along the walls, Bob didn't have a cellar forhis wine. A worker in red and blue set a large pan of sticky, nut-coveredcinnamon rolls on a rack near her. She closed her eyes and breathed. The cinnamonand sugar beckoned to her.

The door's bell chortled brightly. Sarahglanced up. A man stood with his back to her. He had long blond hair neatly tiedin a bit of leather, triggering a thought she couldn't quite remember. She sawthe baker talking to him in the edge of her vision.

"How about a cinnamon roll and two cups of hotchocolate?"

"Sure, help yourself to theroll."

"Okay." He glanced briefly at Sarah, who sat by therack.

She looked out the window again. Her paper was still blank, and herpen lay on the table.

Spring-fresh detergent wafted to her, among thebakery smells, as the man moved by her. Dan's clothes all had had thatjust-out-of-the-drier smell. She had considered buying a bottle of that detergentbut decided she liked the smell better on Dan than in her closet. Frustrated, sheran her fingers through her hair. If only he would just walk in thedoor.

She smelled the rain-scented detergent again.

The man set acup of hot chocolate on the table in front of her. Surprised, she lookedup.

Sarah's eyes moved from the streetoutside to rest on his face, almost as though she wanted to find a clue in it.Then she smiled, too. 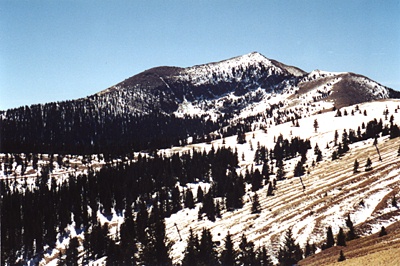