Barbie had a hangover. RaggedyAnn, who had spent the evening mopping up the evidence, didn't know which Barbiehad gotten wasted the evening before, but she had a kind heart and so decided itwould only be right to tend to the drunken fashion doll. She therefore snuck aBarbie Light-up Bathroom set from the Barbie aisle of her home, Wal-Mart. Barbiespent the night with her blond, plastic head in the plastic pink toilet withglow-in-the-dark flowers. Raggedy Ann had a history with the Barbie dolls, thoughnone of them would ever have recognized her. She had no reason to help any ofthem, yet her good nature made her anyway.

The barriers weren't just between Barbiesand other dolls. There were the wannabes, like the Get Real Girls, created byBarbie-haters who hoped their dolls would become as hot as Barbie. Unfortunately,they only wanted to become Barbie. They tried to talk the superior dolls intobeing friends with messages like "We're the same size and we both have coolclothes ..." The Barbies sometimes had them run errands.

The wannabesloved it. "Oh, Barbie," they would coo. "Can I get you something?A Coke or something?"

To which the selected Barbie might respond,"I only drink diet soda. It's obvious you eat sugar products, but some of uscare about our figures."

Then there were the G.I. Joes and the Kens,who were so full of themselves that they sometimes gazed lovingly at theirreflections on the shiny floors. The Barbies adored them. The dolls dated, buttheir relationships never lasted, for the "friends" of the newlynon-single Barbie would become jealous and try to attract the attention of herboyfriend. He would get passed around their little circle of cool until theBarbies lost interest.

There were also the Polly Pockets and the PreciousMoments dolls, who were the friends-of-Barbie-but-not-really. They talked aboutthe superior dolls with haughty disgust ("Oh my God! I would so never befriends with that witch!"), but leapt at any chance to be friends withthem.

When Raggedy Ann arrived at Wal-Mart, she was not alone. She came ina shipment of other Raggedy Anns and Andys, big ones, small ones, cloth ones,porcelain ones. They wore different clothing, all in the same old-fashionedstyle. They all had the same trademark mop of red yarn hair and the same rednoses. Raggedy Ann was placed in the display window, along with a Raggedy Andy.She was informed (by means of eavesdropping on a human conversation) that shewould be kept in the window until the dolls were no longer selling well and thenperhaps put on sale.

Raggedy Ann had trouble making friends. The otherRaggedy Anns and Andys sold quickly, but Wal-Mart decided that despite this, theywould not stock any more of the dolls. "They just aren't what the kiddieswant," she overheard an employee remark. "They're more into the moderndolls."

She tried initiating conversation with the other toys."I'm Raggedy Ann," she introduced herself to a Barbie. "I'm newhere."

To her surprise, the smaller doll laughed. Not a nice laugh,either. "Obviously," Barbie retorted.

"Obviously. You're new here.Duh." With one motion, Barbie flipped her hair over her shoulder and intoRaggedy Ann's face. She began to walk away (she tiptoed, really, because of theshape of her feet).

"Barbie? Is that your name?" Raggedy Anncalled hopefully.

The skinny figure turned with a bored stare."That's Coca-Cola Majorette Barbie to you. Please get to the point, if youhave one."

"I just thought maybe ... we could be friends."But her words were lost, for Barbie had resumed a conversation (if you could callit that) with another Barbie doll.

Raggedy Ann refused to lose hope thoughit was obvious, she realized, that she would not find a friend among the Barbies.She ventured into the next aisle, which also seemed overrun by Barbies."Another Barbie aisle?" Raggedy Ann wondered aloud.

One of theBarbies turned to her. Raggedy Ann realized her mistake: the doll had no Barbieheart logo.

"You're looking for Barbie? Which one? Oh, well, we're,like, best friends, so I'll just tell her you were looking for her. You wereprobably looking for Magical Mermaid Barbie, right? Who are you,anyway?"

The jumble of words confused Raggedy Ann. "Who areyou?"

"I'm a Get Real Girl. I'm Nini. It rhymes with Barbie.Those are my friends, Nakia and Skylar and Gabi and Cori and Claire. Yeah,they're good friends, but me and the Barbies, we're like this -" Nini heldup two fingers.

Trying not to make the same mistake she had with Coca-ColaMajorette Barbie, Raggedy Ann forced herself into a conversation with this doll."So, what do you like to do?"

Nini, who seemed far less rudethan Raggedy Ann's previous encounter, shrugged. "Oh, you know, the peoplewho created us wanted us to like sports, apparently, so I come with all thishiking gear, but you know, I don't really like it. I'd rather go shopping withBarbie. Although hiking is good for losing weight."

Raggedy Ann feltlike a giant compared to the doll's skinny features. Before she could respond,Nini excused herself with an excited "Sorry, gotta go. That's Barbie'sBeetle, she's picking me up to go shopping."

Raggedy Ann foundherself losing hope as she entered the very last doll aisle. The homey appearanceof this aisle, however, gave her hope. The little dolls were running around,laughing and playing games. Raggedy Ann put on her brightest smile and approacheda Polly Pocket.

"Hi there," she began. "I'm Raggedy Ann.I've been trying to make friends here. I talked to a Barbie, but-"

"Barbie, that witch," the smaller doll interrupted."You were talking to her? Oh, God. You probably wanted to be friends withher, right? Oh, God. Polly, can you believe Barbie? I can't stand her." Bythen, another Polly Pocket had joined her and they were deep in conversationabout that awful Barbie.

"Um, we're kind of busy. Why don'tyou go sit with your own friends? Or do you not have any?"

RaggedyAnn trudged back to aisle seven, where the rejects were. And she was one ofthem.

Although the dolls in her aisle were not "in," they werekind. Within a few months, Raggedy Ann had friends. Linnea of Aspen didn't haveperfectly applied make-up, Madeline had no blond hair and the baby dollscertainly weren't skinny, but they were friendly.

She had almost forgottenher experience with Barbie when one day a drunken Barbie stumbled into heraisle.

Raggedy Ann knew the other dolls had parties, parties that werenothing like her idea of fun. This Barbie had clearly been at one of thoseparties. When Barbie woke up the next morning, blurry-eyed and confused, RaggedyAnn was by her side.

Raggedy Ann calculated the number ofminutes she had spent trying to be friends with the Barbie dolls. As she staredat Barbie, her confused face, her bloodshot eyes, her tight clothing and perfecttiny feet, she realized it had all been wasted.

Raggedy Ann might not havehad fashionable clothing. She didn't have long blond hair or a skinny waist. Shedidn't have beautiful, identical friends. But she didn't care anymore. She didn'tneed Barbie's friendship. Because, she realized, she was better off without her. 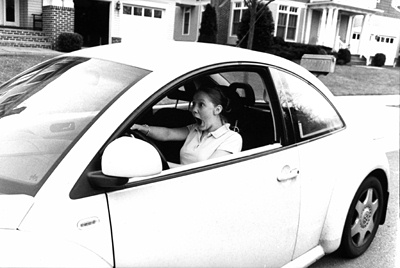 View profile
I like the overall story line, but I got kind of offended with the whole "Long blond hair" thing. I didn't really understand it, because just because you're blond doesn't affect who you are. Also, there's more than just blond barbies. I hope I'm not making you mad! :)
CrashBagPhoto SILVER said...
on Oct. 14 2013 at 4:04 pm
CrashBagPhoto SILVER, Amston, Connecticut
8 articles 0 photos 10 comments

View profile
I love this message! It was a really good move to use classic dolls, it really helped me visualize it.
paigeswifka GOLD said...
on Aug. 9 2013 at 10:59 am
paigeswifka GOLD, Goose Creek, South Carolina
12 articles 0 photos 14 comments
View profile
I was skeptical about this piece at first because of the title. I figured that this would just be another story about a girl wanting to become flawless like the barbie dolls. But I see that I was wrong. I really enjoyed this piece because of the message that you displayed. You've really shown a lot of readers that you don't need to be perfect to fit in or to have friends. Great job!
RelativetoWriting GOLD said...
on Aug. 9 2013 at 10:19 am
RelativetoWriting GOLD, Brecksville, Ohio
13 articles 0 photos 34 comments

View profile
I really enjoy reading stories like these that could be some kind of children's books but have a great message. The dolls are so lifelike in your descriptions. Congrats on your publication!
KnitsandPurls GOLD said...
on Jun. 26 2013 at 12:33 pm
KnitsandPurls GOLD, Mahtomedi, Minnesota
13 articles 0 photos 83 comments

Favorite Quote:
"Life's a book only you can write it"
-Kennettsoftball16

View profile
Great job! I loved the moral and the way you put it into context of dolls instead of people. That was really cool and original. The only thing I'd say is that there are some words without spaces in between them and that sort of threw me off a couple times, but other than that it was great!
TheBlackRose BRONZE said...
on Mar. 31 2013 at 1:44 pm
TheBlackRose BRONZE, Madrid, Other
3 articles 2 photos 7 comments

Favorite Quote:
I knew who I was this morning, but I´ve changed a few times since then

View profile
Really nice, the way you wrote it! And nice moral at the end, really think you got high school "society" framed on your story
GreekGoddess BRONZE said...
on Mar. 9 2013 at 9:22 am
GreekGoddess BRONZE, Andover, Connecticut
3 articles 0 photos 182 comments
View profile
So cool! I can so see a barbie doll being that way. :) great job! There were a couple of spelling mistakes but overall it was very well writen!
In_Love_with_Writing GOLD said...
on Jan. 1 2013 at 2:35 am
In_Love_with_Writing GOLD, Easton, Pennsylvania
12 articles 0 photos 389 comments

Favorite Quote:
"a man is never more truthful than when he acknowledges himself a liar" mark twain

View profile
I loved it!!