The door opened, and everyone looked, as they always did when someone came late. The only difference between this and all the other times was that no one looked away. As the new arrival approached the teacher, he seemed to ignore the curiosity on everyone’s faces. He walked quickly, placing one heavy foot in front of the other. On his feet, which were way too large for his body, he wore Birkenstocks, their thick leather straps wrapped tightly around a pair of dense wool socks.

The new kid’s body seemed to move in segments. First, his legs would swing outward, as if unable to bend at the knee, then his jean shorts would crease awkwardly. His torso, which was highlighted by a yellow Yellowstone National Park T-shirt, seemed to struggle relentlessly against the painful weight of a camouflage backpack on his shoulders.

The silence continued, and the teacher’s mouth hung open as much as everyone else’s as he verified the boy’s attendance. The teacher returned the schedule, trying not to make eye contact, and pointed to an empty seat … next to me! I gulped as the strange newcomer made his way down the aisle with long, loud strides. The Birkenstocks squeaked loudly, even on the classroom carpet. He completely ignored my open-mouthed stare as he fell into the chair that creaked in objection.

His bottom lip was puffed out as if he were about to cry, and just as the teacher was about to return to his lecture, he let out a loud sniffle that made everyone glance at him. Was he going to cry?

After a few seconds, the teacher turned to the board and began talking again. I tried to pay attention but was overwhelmed by an unbelievable smell. It reminded me of rotten eggs, almost sulfurous. As I looked around me, I realized others had begun to smell it too.

I decided to take another look at the culprit. He was concentrating on the lecture with his lips pressed against his intertwined, hairy hands. Short brown hair crowned his head and uncannily matched the unshaven hair between his upper lip and nose. White foam had gathered at the corners of his mouth, as if he had forgotten to wipe it after he brushed his teeth.

After staring for a few seconds, I noticed something incredibly troubling: He was staring at me! His eyes bore into mine with such confidence that I was forced to lower my gaze.

I tried to turn back to the board, but I heard a small, low laugh. I glanced over and saw that he was looking at me and laughing! I slanted my eyebrows in offense and whispered, “What?”

“Nothing, nothing,” he whispered in a low voice that carried through the room. Everyone looked back at us. “It’s just that your nose is kinda crooked.” 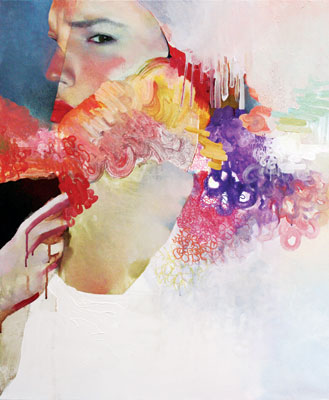 Favorite Quote:
If life gives you lemons. Paint them green and pretend they're limes.

View profile
wow! i love the twist ending! it was soooooooooooooo good! i give it 10 thumbs up! (if i had that many thumbs)

Favorite Quote:
“Be who you are and say what you feel because those who mind don't matter and those who matter don't mind.” - Dr. Seuss