John evaluated his surroundings in terrified desperation. He was ready for anything; his feet were like springs on the hard concrete ground. Scanning past the picknick benches around him, he saw nothing. He couldn't tell whether this was a good thing or a bad thing. Suddenly, his friend Mike jumped up from behind a picknick table, running full speed towards John, jumping over all obstacles. Regarding the previous question, it was the latter. John jumped into action, over one table and on top of the other. There was a tall fence to his right. Seeing this along with his friend catching up fast, he jumped onto the fence, latched on, and started manoeuvring the opposite way. Mike was not expecting it and looked back. Upon doing so he tripped, smashing his ribs on the next table. John briefly looked back. He could almost feel the pain of his friend but knew that there was no way that he could help. He pressed on, his lungs beginning to ache. He sat down at one of the picknick tables to get some more rest.

John was caught off guard. In the near distance was his friend Joey. Upon looking up due to the sudden noise, John caught a quick glimpse of Mike lying on the bench, not moving. "It's okay," John lied to himself as he got up and ran. He took a sharp right turn along a wall, closed narrowly off by the tall fence. Hearing Joey clumsily slamming against the wall and regain his footing caused John to reinforced his speed. There was another sharp left turn quickly followed by a right turn. It was still narrowly closed into a hallway, this time with two walls of different buildings, one glass. He knew it would slow Joey down if he took the turns properly. Still relatively close was another sharp left turn, still in a narrow hallway but leading into a wide open space. John almost tripped and made harsh contact with the glass wall as he was meant to turn. He quickly regained his balance and ran, almost getting caught. Approaching the end of the hall was his friend Angie. She was running at a steady pace with the intention to close off the opening. John barely made it out on time, jumping out of the way to dodge her desperately reaching hand. He almost tripped again but ran into a courtyard. It was a square, three sides were a building wall of the same building, hugging around the field which was loosely clothed by benches. Another building created the fourth side of the square and both of the corners had wide openings. John jogged to the back-middle of the building, farthest from the exits. He stopped and caught his breath. That was when he felt the overwhelming dizziness, the painful lack of air, and the crippling pain of his legs. Joey and Angie had slowed to a walking speed and were approaching from the exit to the left of John. Sean and Oswald, two more of his friends, approached slowly from the opposite exit. All of John's years of Ultimate Tag had only lead up to that very moment. He formulated a plan to take the left exit and run somewhere easier to hide. He looked behind him. There it was.

A machete was resting behind one of the benches. It horrified John, but he knew what to do. He jumped over the bench, grabbed it, and jumped over again. The four were running at full speed, ignoring the obvious threat. John stabbed Joey in the chest, and pulled the machete out, using the momentum to turn around, slicing through Oswald's face. John advanced the blade, decapitating Angie, and Sean tripped and fell on the machete.

John was shaking, traumatized. He just killed his friends. It was no consolation to him that they were zombies already. 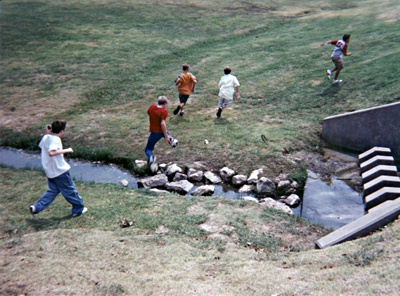 This was a quick story I whipped up just for fun. Enjoy!