Favorite Quote:
Fear is like happiness but the smile is wider

Stairs, hate stairs, why does every international drug lord have their hideout below or above ground? Its always one of the two, I’ve been doing this since puberty. Ugh, puberty, ugh, acne. At least I’m done with that whole teen angst thing. Mostly. I walk into the room and am disappointed, again. I want bad guy to be sitting in a throne stroking a cat, that image is practically why I got into this business. Instead I see four unthreatening men sitting around a small table eating peanuts and playing poker. They're even sitting those horrible white plastic chairs.
They hear the door open and suddenly I have six handguns pointed at my face. They suddenly became such more threatening. I am of course wearing full body armor and no that doesn't mean tassels and chainmail, I know I was disappointed too. Despite my bulletproof everything I throw myself down and fire my taser in the direction of a man I have decided to fondly call thug A. Thug B, no this guys definitely a C, shoots me a couple times with no avail. He decides that sitting on me would do more damage. I try to push him off but thug B is coming over and he is a more pressing issue, even though thug C is pressing all the oxygen out of my lungs. Heh, puns. The only thing can reach on my belt is Matt’s lucky horseshoe. I'm not superstitious but Matt is and he never lets me leave without it. I throw it at B and he falls over, C gets up to help and I'm free. Crap! Luck is thing, which means bad luck. I think I just contracted triskaidekaphobia.
Punch to C’s nose. Pow! I should get a band to do my sound effects for me, but I don't feel like hauling their instruments, I suppose they would have to be a Capella. I should look into that.
I whirl give a roundhouse kick thug B. That kind of motion is befitting of an exaggerated sound effect don't you think? Really just any suspense music, like in Jurassic Park, with all the velociraptors. Bored I just tase everyone and handcuff them. I bend over to moon the handcuffed men. Shaking your bare butt in front the baddies you just took down is satisfying, childish, but satisfying.
I need a drink, maybe a cocktail. 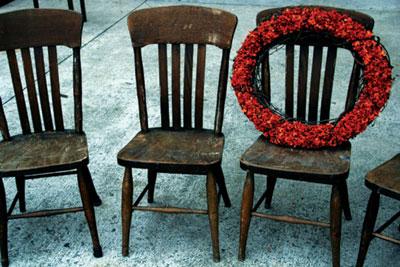 The author's comments:
Sorry this is so odd, it was originally written for a contest so I had to add certain words and it had to be under 400 words.
Post a comment
Submit your own