Maddness is a Person | Teen Ink

Maddness is a Person

“Don’t move, both of you, I see a fish,” Charlie’s words awaken the monster that is my stomach and my mouth waters. I look to my left and Tyler’s body is tensed in the bottom of our raft. He stares at Charlie with a hunger I’ve never seen in a human before. With a splash and a yell Charlie raises the makeshift spear in triumph, a small fish flopping at the end. With tears of relief running down Charlie’s burned face, he raises the now dead fish and yells to the heavens. A picture of pure joy.
Suddenly the small raft lurches and Tyler launches himself at Charlie, the Salt water purifier held high in one fist. A look of utter madness gleams in his eyes as he attacks Charlie. It’s as if a whole other person has joined our small company of survivors, and now there are four of us. Too much for a little raft to support. Its as if tyler flickers in and out of reality, as my screams jolt him a bit, but then the fourth person takes over. Tyler hits Charlie hard on the head and grabs the crushed fish from the bottom of the raft.
He looks at Charlie's unconscious form lying motionless, then he looks at the fish.

“Tyler...” I warn as I reach behind me for the harpoon. “Charlie is a person, you knocked him out, he's not dead, you can’t just eat a person.” Tyler flickers back for a moment before he lunges for charlie’s throat with a growl.
He’s jerked short by the spear jutting out of his stomach. He twitches and spits like a rabid dog before sliding to the bottom of the raft. With one last growl the fourth person leaves our raft and its just Charlie, me, and a dying Tyler. Charlie wakes up and I help him to sit up as best one can in a raft in the middle of the ocean. We sit in silence except for the low gurgling sounds coming from Tyler and then even those stop after a time. Now there are only two people left on the raft.

“Do you want some dinner?” Charlie asks looking at me with a tight smile. I dry-heave over the side until I calm my nerves enough to realize he was talking about the fish. 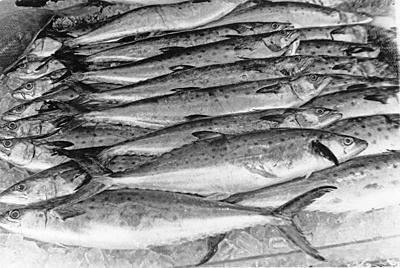