The surface tension of the water didn't have time to break before Whiplash was gone, skating across the ocean like an extremely fast and handsome waterbug. The radio in his ear buzzed, “-missing coast guard boats have still not been found, local heroes Kraken and Whiplash have reportedly been seen in the area helping with the search effort.” Although so far there had been no sign of the boats, or the other hero on the scene. He only knew of the mysterious, aquatic hero Kraken from the newspapers.

Whiplash stopped for a (literal) fraction of a second to look back at the city. He thought that he wasn't too far from shore, and he could probably cover the entire coastline in the next half hour before running out of energy when the ocean crashed up around him.

For a second, he thought he had slipped out of speed-time and broken the surface tension. In the next few seconds he had to think, he was dragged deeper and deeper and he turned to look at whatever-whoever had grabbed him and he was starting to panic and there was nobody there and suddenly everything was still. What the hell?
Whiplash looked around him for the culprit, but whoever-whatever it was was long gone. The surface was too far to swim up and still have energy to swim to shore. He cursed himself again. Damnit, should’ve let that Kraken guy handle this, he thought as he started getting fuzzy. Not enough air. He closed his eyes and tried to relax.

Hands found his and suddenly Whiplash was pulled again. His arm stung. There was a strange man in front of him who gave him a grin and then, clear as if he was in air said, “You alright?”
Whiplash gave a half-nod, still fuzzy.
The man gave him an apologetic look and pulled him closer, said, “Sorry about this,” and kissed him.

Suddenly Whiplash could breathe. Although he thought he might pass out for entirely different reasons. The man wrapped his arms around him, and Whiplash noticed that they were covered with shifting octopus tattoos. As they swam to the surface, he realized this must be the hero Kraken.

They surfaced, WL coughing and gasping for real air. Kraken was watching him closely with an amused look on his face. Whiplash noticed his eyes were distinctly non-human. He felt flustered.

“Sorry about… that,” Kraken said, pointing to his lips. “That trick doesn’t last long, But I didn’t want you blacking out on me. You’re the speed-hero right?”
WL nodded. “Yeah, Whiplash. Thats me.”
“Hi. Sorry to kiss-and-run but I might have a lead on those boats… do you mind?” Kraken rubbed the back of his neck. WL took note of his blue skin and dark blue-black hair. Gold eyes.

Whiplash shook his head, focusing. “I’ll head back to shore, my gear isn’t really waterproof.”
Kraken grinned again and nodded. The water splashed WL’s face as the oceanic hero dove back under, leaving him to swim back on his own.

Jake groaned and stretched in his seat. His lungs hurt and his arm hurt. He hadn’t noticed at the time, but when Kraken had grabbed his arm he had left little red rings, like octopus suckers had gripped him.

He leaned forward on his table and picked up another sushi roll with his chopsticks. He savored the bite and focused on his notes. He looked over a front page photo of Kraken and a very wet and confused fishing crew above a headline, “One Missing Crew Found, Memories Lost?” and a sticky note attached to that reading “return of Amnesiac? New villain with mind wipe?”

Another article, printed from an online newsletter read “Local surfers found dead miles from shore.” He shuddered, thinking that it could’ve been him who lost his memory or even drowned if not for Kraken. The other hero had said he had a lead, but Jake didn’t know how to get in contact with him to compare notes. He barely knew anything about Kraken other than what he looked like, with wild blue-black hair and sexy tattoos and gorgeous inhuman eyes and how he kissed-
“Everything okay over here?”
Jake started and quickly closed the first notebook, accidently knocking over his soda in the process. He looked up meekly at the source of the voice. “Sorry, man. I was kinda lost in my own world there-”

“It’s no problem,” the man said with a smile. Jake recognized him as the chef at the sushi joint, his long dark hair that was usually pulled into a bun fell down around his face. His nametag read Mateo. Jake felt his face get warmer and he ran his hand through his ketchup-red hair that he was suddenly feeling very insecure about. Why do I keep running into cute guys at the worst times?

Mateo crossed his arms, still smiling at him. “You know we’re closing soon. I just got off-shift.”
Jake looked at his phone clock and smacked his head. “Oh crap, sorry! I forgot you’re not open for dinner on Sunday.”
“We’re not. But you were already here through lunch so if you want to get dinner somewhere else, I’ve got another place in mind,” Mateo said as he picked up Jake’s notebook and flipped to a blank page in the middle. Jake felt his blood run cold at the same time as he felt his cheeks go redder.
Mateo scribbled something in the book and handed it back to Jake before winking and walking off. Jake let out a breath he didn’t realize he was holding as he flipped to the page and picked up his phone again.

At first, when Mateo had texted him “Sorry, something came up :/” an hour before the time they planned to meet that evening, Jake had felt let down. Now, skating through the city streets to the ocean, his ear-radios buzzing with emergency alerts, he thanked his horrible luck with dates.

In a second, Whiplash arrived to the scene. The ocean was rising in spirals and floating on top of it was a figure in a tight black costume. Jet black hair spiked into an evil-looking Astro Boy style and spiral designs running down their legs. Whiplash recognized them as the villain Whirlpool. So that’s who’s been behind the missing boats. Figures.
Kraken was already in action. Whiplash watched in awe as he rode a wave of water like a confident surfer up to throw a punch at the bad guy. Whirlpool waved an elegant finger and Kraken was knocked away by a wave, flying towards a concrete building. Whiplash gasped and zipped over to below Kraken’s falling body, running in a circle to create a vortex of air to catch him. Kraken groaned when he hit the ground gently and rubbed his head. Whiplash ran to his side.

“Thanks, speedy. That’s a good move!”
“No problem. Any idea how to deal with this guy?” WL pointed to Whirlpool.

“You just gave me one,” Kraken replied with a grin. “Run on water and do that vortex trick again. Counteract the ones Whirlpool made.”

WL nodded, grinning. “Good plan, got it” and he was off.

The plan worked. It took a bit of banter and a lot of distractions to lower the villains defences, but once they had, Whirlpool had been thrown off their footing and Kraken had knocked the villain out with a punch. Whiplash could’ve sworn he saw a comical “POW!” as Whirlpool had been knocked back.

Kraken was graceful in action, and underwater. Standing next to Whiplash on the shore, away from news crews, he looked shy and a little goofy with his wet hair. Whiplash didn’t mean to look, but he did anyway. Kraken caught his eye and grinned. Whiplash blushed.

“You did good out there, speedy,” Kraken nudged his arm.
“Ah, so did you,” Whiplash looked at his skates and shrugged.
“Since that’s all dealt with, if you still wanted to get dinner I’m down.”

Kraken’s blue skin had shifted to a normal tan and his blue-black hair had turned a normal black. His tattoos were there, but faded, and he was undeniably recognizable. Mateo. Jake smacked his forehead.
“You! Cute-Sushi-Guy! How did you figure me out?” He tugged his goggles off.

Mateo laughed and put his hands on Jake’s shoulders. “You’re usually too fast for people to get a good look at but, like… You get a good look at someone’s face when you kiss them.”
Jake blushed as red as his hair and pointed his finger in Mateo’s face. “And that! What was that about?”

Mateo was still shaking with laughter as he said, “It’s just one of my powers, anyone I kiss will be able to breath underwater for about 5-10 minutes. It helped me save you, yea?”
Jake crossed his arms and pouted, “I see how it is! Leading me on…”
“I did mean it about dinner,”
Jake took a step towards Mateo and kissed his cheek, standing on his toes to get there. “I know. Take out?”
Mateo smiled, taking Jakes hand in his. 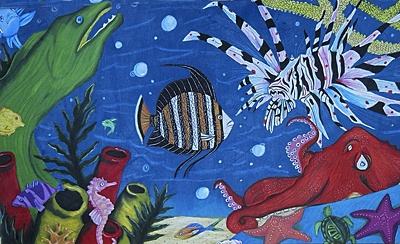 Written for a creative writing course.