Who is John Galt? | Teen Ink

Who is John Galt? MAG

I have been moved by many words in literature. I have been moved by “everything illuminated” as well as things “extremely loud and incredibly close.” I have been called to a “great rucksack revolution” by the same man who told me “love is a duel,” something I have never stopped believing. Once, a young woman named Sylvia whispered to me, “The world is but a bad dream,” so I wondered for days how to wake from it. Just as Sylvia and Kerouac and Jonathan Safran Foer, Ayn Rand once moved me as well.

When I first read Ayn Rand’s Atlas Shrugged, I ran the name John Galt over and over in my mind. You might say I savored it with a wine connoisseur’s palate, feeling out each corner of the name and trying to imagine how Ayn Rand conceived of the man behind it. I envisioned her sitting with a notebook and the words “John Galt” written on an otherwise blank page. She must have stared at the name, wondering where it came from and asking herself, “Who is John Galt?” And so, with that first line, Atlas Shrugged was born - all 1,084 pages of it.

I was only a few hundred pages in when my plane began its descent to Charles de Gaulle Airport. As I watched the French landscape rise to greet me, the woman next to me leaned over and whispered, “Who is John Galt?” At this time, I had only 300 pages of not knowing the answer to offer her. Not only did she speak to me in a rich French accent, but she possessed the secret that would keep me restless for another 700 pages.

It took only a few days to settle into Paris. It took only two weeks to find John Galt. I read voraciously. The Métro traveled from the Cluny to the Louvre and I would read for those precious seven minutes. I read at the fountains near the Pompidou Centre, where I believe a part of my soul is still hidden behind an abstract painting ... but that is a story for another time. I sat in Rodin’s Garden and tried to look like a beautiful intellectual, which worked until I leaned against my bag and ruptured my bottle of orange juice. I shouted to the streets outside and below my hotel room, “Who is John Galt?” but I was lost in translation and the noise of my city. An elderly Italian man across the narrow street from my room yelled back, “Buon giorno!” and I wondered if I were so lost in translation after all as I called back, “Bonjour!” One might say that John Galt was my Paris tour guide.

Finally, while sitting in the Luxembourg Gardens, I found John Galt. He was tall and gaunt in my head. Perhaps attractive would be an inappropriate word but he certainly could never be missed - much like the Montparnasse Tower that somewhat blights the view of the Gardens. I decided that John Galt was in every face I had seen in Paris. In France. In all my life. If John Galt represents the motor of the world, then traces of him can be found in every person I have ever encountered because they are all part of the schematics that Rand loved so dearly.

More than that, with John Galt as my guide, I had spent two weeks breathing in man’s achievement in art, architecture, and chocolate banana crepes. I spent a full 20 minutes admiring the way man had taken steel and rivets and fashioned them to be as elegant as lace. Have you noticed that about the Eiffel Tower? You can never tell from pictures, just as you can never fathom the magnitude of the Arc de Triomphe until you have stood beneath it and gazed up.

I took John Galt to see the Foucault Pendulum and silently congratulated man on finding the motion of the Earth’s rudder. It was in these moments, in the moments of appreciation for man and man’s achievement, that I found the answer to Ayn Rand’s eternal question: “For neither do men live nor die in vain” ( H. G. Wells).

Maybe it was the café culture, the countless museums or parks or sidewalk painters that made me appreciate the singularity of man and his achievements. Or, perhaps, it was John Galt clutched in my hand while floating down the Seine toward a sparkling tower of graceful steel. Certainly, 1,084 pages later, steel rivets and swinging pendulums seemed equal in majesty to marble statues and canvas portraits. Not only have I now found John Galt, I have also acquired a Randian appreciation for all things that man has been and all things that man has yet to become. 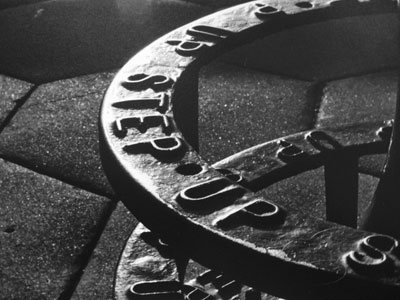