Somewhere in Europe dwells a crazed lunatic running amuck whose precise whereabouts is currently unknown – even to his ­family. This man is my uncle. Uncle Warren always lives life to the fullest, even if it means turning his house into a month-long puppet show, or dressing like an Native American to kayak “authentically.”

Some time ago, while Uncle Warren was staying at my house, he decided to paint a picture. Although this might sound unremarkable, Warren's new hobby would awaken my self-driven philosophy of non-conformity.

He began to work and I peered over his shoulder to discover that this painting involved naked men and women. My eight-year-old self was perplexed by the scandal of painting people in the nude. I asked my uncle why in the world anyone would want to paint a picture of naked people. Dramatically, he turned to me and declared, “Clothed people are dated; people in the nude are forever. You must always live life like you were naked.”

Although this advice did not surprise me coming from Uncle Warren, it has stayed with me. What did he mean? Did he not want me to wear clothes? I stored this advice in the back of my mind until my tiny attention span drove it away. A few days later, just before my uncle was supposed to leave for Europe, he put the incomplete painting aside, saying he would finish it some day.

Years went by, and I battled with the cliquey and provincial crowds of high school. Like any teen, I was very concerned about what I looked like, who I hung out with, doing the “cool thing,” and trying to fit in. Individuality does not exist in the Abercrombie years of junior high.

High school brought a constant flow of clubs, organizations, and ­activities, and I eagerly joined many of them; I craved acceptance, but this attempt at supreme popularity ultimately caused those around me to question my motives and who I truly was. How could someone be a part of the Players, and still be in Student Government? They hate each other! Wait. This kid likes science, but he's in Camerata? The class president cannot be friends with a skater; total discrepancy in the social code! Apparently, I had upset the status quo. In a class as large as mine, everyone is supposed to align himself with one particular group, right?

Wrong. And this revelation smacked me in the face like a frying pan after I received an e-mail from Uncle Warren. It was a relief to hear from him and to know he had not been swallowed by Europe. His lengthy note described his wild adventures in Germany and Spain, and, of course, detailed his latest works. At the end of his message was a huge surprise: ­“Remember that painting I was making at your house years ago? I finally finished it. I've attached a picture.” I quickly opened the link.

I saw a beautiful spread of soft, cool colors, and a soothing quality of tranquility in the position of the naked figures. Suddenly a distant murmur of a memory snapped out of my hippocampus: “Live life like you were naked.” The revelation erupted inside me like the San Andreas Fault. Uncle Warren was not being creepy or even rambling. He was urging me to live life free and unburdened! He meant that I should show the world what I was and never be ashamed. I felt connected to this man as I was overwhelmed with a long-awaited and much-needed comprehension of the world. In that moment I realized the only thing standing in the way of getting what I wanted was my own insecurity. If I left all of my “heavy” and “dated” clothes of past disguises behind and just did what I enjoyed, nothing could stop me from being a thespian and enjoying baseball, or singing while I learned the difference between the thalamus and hippocampus. To cheat myself of these joys would be equal to wearing a mask my whole life.

Don't get me wrong; you will never find me running across a campus green showing the world my birthday suit. Rather, I took this opportunity to decide that henceforth, I would not conform. Everyone has a place in the world, although it is not always what people want or expect. I believe that if you find the place where you are who you are regardless of what those around you think, you achieve virtual nirvana. I am very pleased with who I am, and I know that wherever my life takes me, I will stay true to myself and my morals. 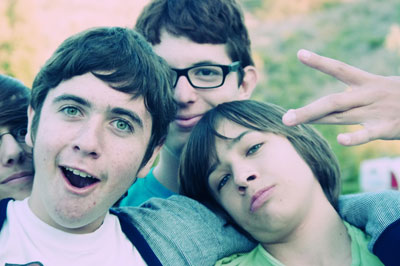 James! this was amazing i can't believe i came across it within 247 pages of essays. I loved ittttt!