Global Leadership Adventures- once in a lifetime summer | Teen Ink

Global Leadership Adventures- once in a lifetime summer

I walked into the Miami Airport terminal to see several other high-school aged students dressed in red shirts. I timidly approached them and introduced myself. “Hey, are you guys with GLA?” I asked nervously. They all assuredly responded yes, and we became acquainted with one another. Friendships were quickly forged, and we could all bond over our excitement and enthusiasm towards the trip. We finally boarded the plane, more excited than ever to touch down in Costa Rica. None of us were sure what to expect, but we all knew that we were about to have the time of our lives, and we could hardly wait.
This was only the beginning of the most unforgettable three weeks of my 15 years. Global Leadership Adventures is an amazing program offering high school students from around the globe leadership/community service expeditions to foreign countries. I applied to the Costa Rica program in January, excited to spend my summer in an impactful and unique way. I thought GLA looked like the best summer program for me. It involves students from all over the world, not just the USA, community service is a large aspect of the trip, and an emphasis on leadership on an international level is high.

Upon arrival, we were taken by bus from the airport… it was already around midnight, but the bus ride to the campus was full of energy. We reached our destination, the small town of Santa Ana. We stayed at a campus called United Worlds College, which has several locations internationally. We met the director of our program, Carley, and the other three great mentors, Doranne, Steve, and Vivi. They walked us to the dorms and we received our room keys and dorm assignments. The dorms were in house-like structures. There were two girl dorm houses, and one boy dorm house. Mine was named Hermosa, and all of us in it immediately became close friends and laughed the night away.

The first component of the trip is the community service. All 34 students were divided into 3 groups: CINAI Pre-School, a shelter for homeless children, and Special Olympics volunteering. I was assigned to work at the pre-school. It was right down the street from the college and we would walk there every weekday afternoon. There were several underprivileged young children ranging from about 3-6 years old. Every day before we went we would collaborate a plan of activities and a basic schedule to follow. These kids were adorable, but they were extremely rowdy and difficult to control. Each of us had one specific kid that sort of stuck to us. Whenever we would walk in they would scream and run to us with genuine enthusiasm. Of course the kids only spoke Spanish, so it was a great opportunity to practice the language. Everyday posed barriers and obstacles in dealing with the children, but when a day was a success, it was more than rewarding. The last day of community service was tear-jerking, because we all knew there was nothing else we could give the children except the memories we had created.

Overall the trip was greatly focused on leadership. The mentors gave us very informative seminars on different aspects of leading and we discussed several thought provoking topics. Many high-schoolers hear the word “seminar” and think boring, but they truly weren’t. Each and every one of us would get involved in our mentor groups and participate in all the lessons planned. Not only were we learning but we were also connecting. We did several activities that evoked self-awareness, as well as the awareness of others. Everyone was almost connected on an emotional level after about a week or so into the trip. Never have I been with such a diverse group of people and been so close. All of my new friends and I felt like we could tell each other the world. It’s a unique bond having friends like that; it’s an amazing thing to have. We all had a blast together and left with tons of inside jokes. The mentors were great too and they were very involved in the trip. We each had individual meetings with our mentors to set personal goals for ourselves which is a great thing.

The weekends could be described in one word, adventure. The first weekend we went on a long hike through the picturesque mountains, then trekking down a river in the rainforest. We were supposed to be cleaning it of pollution, but we really were just trying to stay alive! We had to trudge through the endless rocky river with no way out. Yes, this was tiring and gruesome, but in the end we felt accomplished and had many experiences to laugh about later. The next day we went zip lining which was a highlight, there’s nothing better than gliding through the canopies of Costa Rica. The next weekend we went white water rafting. This was a very memorable part of the trip. Several of us fell out (I fell out twice), and the whole adventure was nothing but exhilarating. We did several other fun things on the trip such as Salsa dance class, music class, a day at the beach, etc.

I could write forever about this trip, there aren’t enough words to sum it all up. I left with irreplaceable and hilarious memories such as belting out songs on bus rides through the mountains, sneaking into each other’s dorms piling 5 of us into a bed, capturing a giant moth out of our bathroom and bringing it into the boys dorm, and countless inside jokes that make me laugh whenever I think of them. Of course the trip was extremely meaningful on a higher level and impacted my life in countless ways. I never thought a mere three weeks could mean and teach me so much. The hardest part was leaving. Boarding the airplane early in the morning, hugging all of the mentors goodbye… then when I reached Miami hugging all my friends goodbye as we all got on different planes to connect to our hometowns. Several tears were shed, and it was extremely hard to part, but we all still remain in touch. The memories will not be forgotten and this experience will shape me forever. Global Leadership Adventures Costa Rica 2008 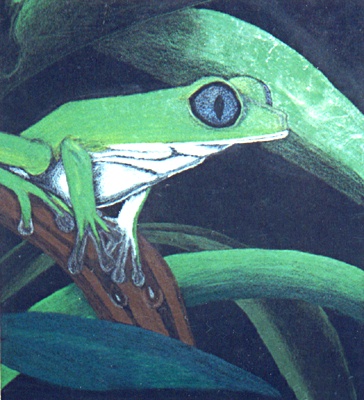 The author's comments:
I hope this will inspire everyone to take part in a summer program, I can say so much more about it. I learned an incredible amount from this experience. Feel free to contact and ask me questions.
Post a comment
Submit your own

Favorite Quote:
A synonym is a word you use when you can\\\'t spell the other one.

Sharshar said...
on Jun. 15 2016 at 8:21 am
I have been on three separate trips with GLA and the cool thing about GLA is that unlike some of the other volunteer abroad companies, GLA values in also allowing the students to have a say so in what they want to do, so on top of being an extremely organized program they also get the students involved by allowing them to lead their own programs, hence Global LEADERSHIP adventures smile emoticon. I had a great time in each of the locations (Costa Rica, Thailand, and India) that I've traveled with them to, definitely would suggest them to people.
Emily said...
on Jan. 24 2016 at 4:25 pm
I am thinking about going on that trip this summer! I chose ten days because it is so much less expensive and I think the program in Dominican Republic sounds amazing, but I do worry about it being too short. You said you wish you could have made it longer, and I guess I would like to ask, did you think ten days was fulfilling enough? or would you recommend spending the extra money and go for fourteen or twenty one days?
MayaV said...
on May. 13 2015 at 2:47 pm
I went to the Dominican Republic with GLA for the 10 day beach-side service adventure trip and it was truly amazing. We did unbelievably important work and also crazy adventurous things and I wouldn't change anything about my time down there except for making it longer. I think it's an essential experience for us young people to go out and experience other, less privileged lifestyles and get a real sense of what's going on in the world first-hand and I don't think there's a better way to do that than with GLA. This article really captures what GLA trips do and I would recommend taking one at some point.
SarahNoelle said...
on Jun. 13 2014 at 8:36 am
I traveled with GLA to Costa Rica last summer and it was an amazing expirience. I felt safe during my whole trip and was very comfortable with all of the people I met. I came home feeling empowered and inspiried. I highly reccoment this program to anyone interested in international service travel.
lizzo said...
on Mar. 31 2014 at 1:43 am
hey, thanks for sharing your experiences i found it really inspiring! I am interessted in taking part of a gla program this summer too, and had a few questions I was hoping you could answer. First of all, what program did you take part in? I'm interrested in the Costa Rica beachside service adventure. Also what were the essay questions like (the ones with the application process). I would love to hear back from you!
tulipan said...
on Feb. 26 2012 at 1:46 pm

My daughter and I are thinking in getting her enrolled to the GLA's Tanzania Program for this summer. Of course I worry about her safety what was your experience in this regard? Is GLA for real? Thank you for any feedback

so I'm actually like...just about to sign up for this exact program!

I guess I'm worried about friends and social life. What if my group doesn't have a good dynamic, like the one that yours did? Any advice to someone about to go?

thank you so much for this review! i am really interested in global the GLA program.

My only question is - How did you convince your parents to let you go? were that scared about your safety?