Favorite Quote:
I am an artist bound only for the poet's glory....But only achieve half of the success that my dreams aspire to find, And to what do the whispers tell me of this failure...To what end to they haunt my nightmares...my eternal dark dreams...

Aliens vs. Predator, also known by fans as Aliens vs. Predator 3 or AVP3 to distinguish it from earlier titles, is a 2010 video game developed by Rebellion Developments and published by Sega for the PC, PlayStation 3 and Xbox 360. Aliens vs. Predator is an astounding 1st person shooter, with brilliant graphics and design. The game is unique due to the fact of how many options the player gets to eviscerate...emasculate...and simply brutalize their unexpecting prey. Not to mention the marine campaign's storyline is just marvelous in it’s out right, due to a good plot then surrounded by the plots of other campaigns. This game is the sequel to Aliens versus Predator 2, although it does not have any connection with that game's plot. Instead it charts events on the planet BG-386, where a Weyland-Yutani research team led by Karl Bishop Weyland has discovered a Yautja Pyramid, and is simultaneously studying the Xenomorphs found there and hoping to unlock the advanced technology contained within. The Aliens soon escape, prompting a response from the United States Colonial Marine Corps, while the Predators also send three of their members to investigate. Aliens vs. Predator is the fifth game in the Alien vs. Predator franchise. As with previous titles, it features three campaigns, one for each race/faction (the Predators, the Aliens and the Colonial Marines). These campaigns are separate in terms of individual plot and gameplay, but form one overlapping storyline; giving the player the fun and replayable experience they oh so desire. The game also retains a beautiful multiplayer system, in which it is best related to rock, paper and scissors; Unlike black ops, Where the player higher in level as the advantage, this games makes it fair from the get-go. However even though it is a beautiful game, it was quite controversial. It started in Australia, when an early cut of the game was submitted for review to the OFLC, but was denied classification in Australia and effectively banned for sale altogether. The game's developers said there was not be a re-cut version released in Australia. The CEO of Rebellion, defended the brutality of the trophy kill system, Sega eventually won and the game was released in it’s full entirety.
The violence in this game is fantastical in nature and justified by the context of the game, set in a futuristic science-fiction world, inhabited by Aliens and Predators. This context serves to lessen its impact. The more contentious violence is randomly generated and is not dependent on player selection of specific moves, and the majority of the time; the player does not have to be violent but they can choose too. Giving the game it’s beauty of freedom. This is a science-fictional masterpiece of last gen games and if anyone is a fan of the franchise (Alien vs. Predator, Alien or Predator alike.) Then this is a must have item. In personal rating Aliens Vs. Predator receives a 9.1. This game is rated M for mature due to intense violence, blood and gore, suggestive themes and very, very strong language. All and all Sega, and Rebellion did an amazing job making this game, and Personally as a player and a devoted fan of the franchise, I would like to see a sequel to the best Aliens vs Predator game yet; or at least something along the lines, Thank you Sega, Rebellion and of course 20th Century Fox. 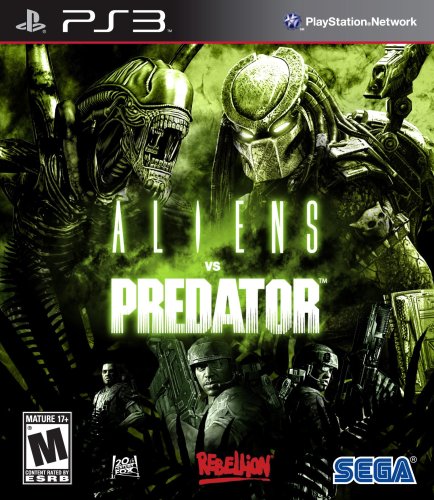 
Buy from Amazon
The author's comments:
This is my favorite game entirely, mainly due to me being a devoted fan of the franchise.
Post a comment
Submit your own