Twenty-five years ago, Nintendo released Kid Icarus. The series has remained dormant, with only a sequel on the Game Boy. But Nintendo has revived the series with Kid Icarus: Uprising. Nintendo has done it again with this game. It is a masterpiece; everything about this game is epic, including the storyline, the gameplay, the music, and the multiplayer.

The storyline of Kid Icarus: Uprising is amazing. You play as Pit, angel and servant of Palutena, the goddess of light. Palutena plays the role of guide and mentor; she helps Pit fly, as the angel cannot fly on his own; however, her power can only last five minutes. The plotline is also incredibly impressive. Medusa and the army of the underworld are back after they were defeated by Pit twenty-five years ago. The entire campaign is gripping, and you will get sucked in. You will be shocked by the plot twists. Each chapter of this game features hilarious banter between Pit, Palutena, and the various enemies of the game that will keep you laughing through the whole game.

In addition, gameplay of Kid Icarus: Uprising is simple to understand after the first few minutes. The control of “air battles” is some of the 3DS's best game controls. You control Pit with the circle pad, you attack with the left shoulder button, and move the reticle with the stylus on the touchpad. When you go down on the ground the controls are similar to air battles, but with one big difference. Along with the reticle, you move the game’s camera with the stylus on the touch pad. This takes a few minutes to get used to, but after that, those controls are easy to use.

The music of Kid Icarus: Uprising is Nintendo's best. It's a beautiful mix of orchestra and rock music that works on so many levels. Every part of the music is perfect; not a single music track is bad and every one is epic. The music in this game outperforms some of Nintendo's best, like Zelda and Mario. The music of Kid Icarus: Uprising impressive on so many levels.

The multiplayer in Kid Icarus: Uprising is 3DS's best. There are two modes of play; Light versus Dark and free-for-all. Light versus Dark is similar to your typical team deathmatch, but with a major difference. After your teams health bar is depleated, the last player defeated becomes either Dark Pit or Pit, depending on the team. Then, the opposing team will try to beat the angel. The first team to beat an angel is the winner. In free for all, you try to kill all other players and the most “kills” all together win.

Nintendo has revived an old friend. Kid Icarus: Uprising is amazing. This game is the 3DS's strongest title. Welcome back, Pit. 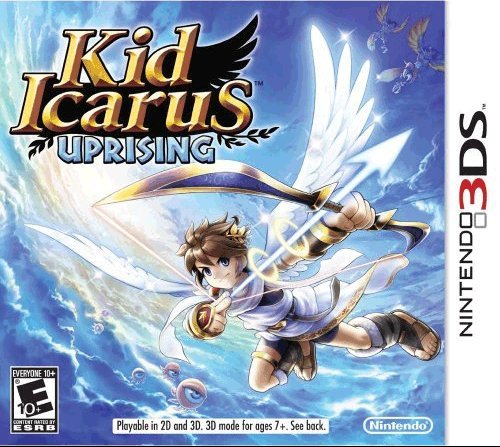 
Buy from Amazon
The author's comments:
3 Teachers made corrections on this. Thank you to them!
Post a comment
Submit your own

View profile
thanks aklotz!
aklotz said...
on May. 30 2012 at 1:27 pm
Awesome review, if I had a console I would buy the game after reading this review!