Favorite Quote:
Never compromise. Not even in the face of Armageddon. (Rorschach - The Watchmen)

Today we’re going to be taking a look at the third and final installment of Epic Games’ multi-million dollar franchise Gears of War. That’s right Gears of War 3 is out and its bursting with content that will engage you for hours to come!
So lets make this review a short one! Go and buy it!
Setting
Gears 3 picks up where Gears 2 left off. It’s been 18 months since Jacinto was flooded, the human survivors have moved to the island of Vectes to rebuild. After a generally quiet period, the Imulsion infected Lambent began to emerge from underground. So Prescott abandons you, and then it’s pretty much every man for himself from there on. And then…this happens!
Adam Fenix isn’t dead after all, in fact he’s being held hostage by Queen Myrrah and knows how to cure the lambent.
As you’re about to beat the game, THEY DROP A BOMB! No literally! It all comes down to an EPIC Ending that I won’t spoil for you.
Presentation
Gears of War 3 looks beautiful -- period. It has been thoroughly designed, the environment is extremely detailed. Light in Gears of War 3 cascades in a beautifully lit atmosphere. The facial animations have all been done very well.
Gameplay
When Epic Games came up with the first Gears of War, I'm pretty sure they wanted to save the best for last -- they probably actually listened to the feedback they got from fans and mapped out 2 other installments.
If you want you can play through campaign by yourself or with up to 4 other players in co-op. Just like the previous games, certain sections of the campaign require you to split up for a brief period, allowing the squad to approach a battle from two different fronts.
In some sections you get use a Loader Mech to carry very large objects, while others use a Silverback, with freakishly explosive weapons to provide cover. Although you play Marcus Fenix for most of the game, in some chapters you play as Cole Train – this allows you to complete tasks that are happening simultaneously with Marcus’s POV.
As I mentioned before, the game has been thoroughly designed -- and this is fairly obvious to the gamer.
Every time you hit Y on the controller, your character executes this bad-ass move either beating your opponent to pulp or curb-stomping his face to jelly. All of that sounds great right? Well, IT IS!
The actual gameplay never seems to get old. There is so much variety that you'll never find the game repetitive. The game is filled with a variety of weapons. I mean who wouldn't wanna decapitate a whole army of locust with a gigantic cleaver is beyond me.
Enemy AI has been flawlessly programmed to make the game challenging even if you're playing on the easiest setting.

The action in Gears of War 3 puts you up against some of the most horrifying battles that you’re ever going to experience. These battles involve not just regular grubs and butchers, but more terrifying creatures like Serapedes, a 15ft long centipede. It attacks you by shooting electricity from its head! And to kill it, you don’t just go guns blazing and spray it full of lead, you have to keep on shooting it up its butt cheeks until it slowly starts to come apart one ab at a time. Though it makes for some pretty funny gameplay when you’re constantly shooting it but you can’t cause its stuck to your butt and you keep getting electrocuted.

One other thing that I think is worth mentioning is the fact that the only thing that’s different about these enemies is the length of time it takes for you to kill them. It doesn’t make use of strategy very well, it’s almost always a point and shoot kinda situation. For example, you get to fight these really cool looking dudes called Armored Kantus. After you fight a couple of them though, you’ll realize that all you really needed to do was frag, shoot and frag, shoot and that’s it! DONE!

But with all the other really cool things that Gears of War 3 this is totally forgiven. Like multiplayer. Yeah multiplayer.

You’ve still got Team Deathmatch, Execution, Kind of the Hill and Capture the Flag.

But new to the game is Horde 2.0 – an improved version of the previous Horde introduced in Gears of War 2 – instead of just fighting increasingly difficult waves of Locust, this time around, kills earn money that can be used to improve your command post with barricades, automatic turrets and all that good stuff! And now, after every 10 waves you and your squad mates are challenged with a boss.

Another multiplayer asset in Gears of War 3, is the new Beast mode. In this mode, its more like Horde 2.0 but you take command of the various Locust Forces and take down your burly human enemies. You earn money through kills, which you can use to spawn as one of the several enemies available.
So take everything you would want in a sequel, top it off with an extremely satisfying campaign and finale, slap it all together with amazing co-op and multiplayer. Gears of War 3 is one complete package that future first person shooters will look up to.
Gears of War 3 gets an awesome 9.7/10.0
The only low being its lack of strategic action when it comes to battle – its pretty much a point-shoot-grenade kind of situation. 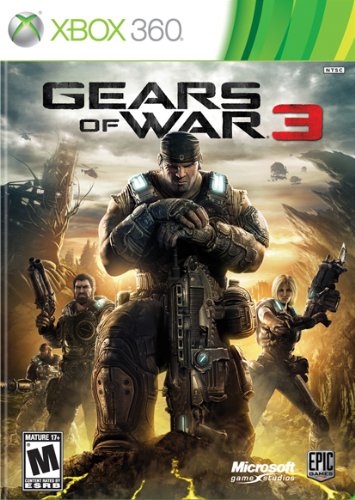 
Buy from Amazon
The author's comments:
I am an avid gamer --- usually buys every game on the first day -- totally unbiased and critical on every level
Post a comment
Submit your own