The Legend of Spyro: Dawn of the Dragon | Teen Ink

The Legend of Spyro: Dawn of the Dragon MAG

When most people think of Spyro, they picture a cute little purple dragon who toasts enemies with a blast of his flame breath. In “The Legend of Spyro: Dawn of the Dragon,” the third game in the trilogy, Spyro has become a teen dragon with a lot of responsibility on his back.

The story begins inside a collapsed mountain, called the Well of Souls, where a group of unknown creatures free the crystal that Spyro, Cynder, and Sparx are trapped in and shackle the two dragons with a magic chain. A cheetah warrior named Hunter saves the dragons, and then they discover that the Dark Master, Malefor, has been resurrected and is turning the world into a hell-like state of darkness. It is up to Spyro, Cynder, and their allies to defeat Malefor and his forces before time runs out.

The gameplay can be frustrating at times but is enjoyable once you get used to it. You'll find that rotating the camera can cause problems. A player can switch between the two dragons any time they desire or have a second player join. The ability to fly with few limits is a new feature. The combat system is slightly more advanced with a new ability to grab, so you can attack enemies in the air or ground and strike them many times. Try mixing combat attacks with breath powers!

During the game, players must destroy blue crystals, stacked stone piles, or vases to upgrade attacks and abilities. Also, the player will find chests that contain pieces of armor for each dragon to wear.

As for drawbacks, every now and then, the AI player (the computer) can act like a goofball and not cooperate. Boss battles can become tedious quickly when pressing the corresponding buttons to advance and defeat them. One mistake and you have to start all over from that spot. A great new feature is the ability to return to any level in case you missed something.

When it comes to the graphics, this game is astonishing. On the PS3, as well as the Xbox 360 version, the backgrounds are alive as particles gust in the air, rivers are fluid, and volcanic lands are scorched. Color is intense and striking. The characters are exceptionally detailed and the overall feeling is a quality virtual experience.

What really brings a game to life is the musical score and the voice talent behind it. The score sets the right tempo as a player maneuvers through the game. Enhancing the game are distinctive voices of famous ­actors: Elijah Wood as Spyro, Christina Ricci as Cynder, Wayne Brady as Sparx, Gary Oldman as Ignitus, Blair Underwood as Hunter, and Mark Hamill as Malefor.

“The Legend of Spyro: Dawn of the Dragon” is a better-than-average action game that is very worth buying. The storyline and characters are exciting and challenging. Beware, though, since it will take more than 10 hours to complete the adventure! 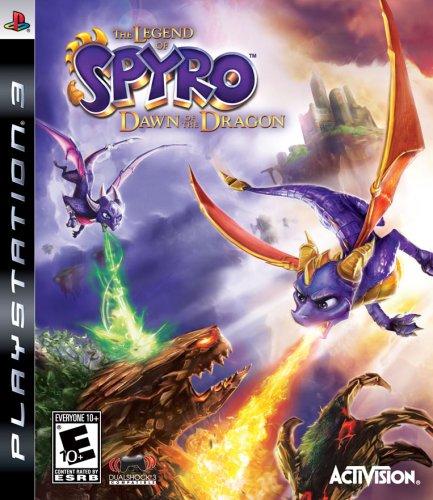 View profile
I have this game and I must agree completely! I honestly don't think they could have picked a better voice for Spyro than Elijah Wood. He plays "The Chosen One" so well.