The article I wanted to make for this topic is about a game called Gears of War, which in fact does not take place on Earth but a planet similar to it called Sera. Sera is a lovely little planet with its own version of our history. Sera managed to get itself into a nasty war of resources after they discovered Imulsion. Imulsion looked like clean energy on the surface which was what humanity needed at that time, but the nations that were not able to get the Imulsion were being slowly iced out of existence from the nations with it, now that that happened a crucial split happens. One half becomes the Coalition of Ordered Governments, or COG for short, and the other half becomes the Union of Independent Republics. The conflict they fought becomes known as the Pendulum War. Which lasted a few years, After the Pendulum Wars humanity gets a 79-year break. After those 79 long years a new disaster takes to the planet called the Locust which were massive, snarling, vicious creatures that shoot first and ask questions later. Called this Emergence Day, The Locust comes from the Hollows which are massive tunnels under the surface of Sera which are made by something we learn about in the second game. But when the Locust came a quarter of all human life was dead on day one. After a year of brutal fighting, the COG gets desperate and decides to burn up most of Sera to get rid of the Locust. Evacuating as much of humanity as possible to the Jacinto Plateau and the city of Ephyra, the COG decided to use a weapon called The Hammer of Dawn. A lot of the Locust were killed, right along with millions of civilians who couldn't evacuate before they started the Hammer of Dawn. The people who didn't like the ways of the COG became known as the Stranded. A scientist known as Adam Fenix, contacts his son, Marcus, to tell him he has something of great importance to give the COG. Marcus abandons his post to go to his father. And boy was that a "dumb" move, because he was leaving his fellow gears to defend with out him. When Marcus reaches his father, his mansion collapses, crushing him beneath --- or at least, Marcus thought it had but enough with that, that is for a later date. Thankfully, Marcus doesn't even end up doing a full sentence, because four years after the incident with Marcus and his father, the locust ends up attacking the prison he was sentenced to. The order is given to pardon all prisoners, but one of Marcus' old Gear squadmates, Dominic Santiago or Dom for short, comes for him personally, bringing armor and a Lancer (The weapon issued to most gears for the wars.) Once they killed their way out of the prison, he is promptly drafted back into COG via Delta Squad, which includes Dom, Anthony Carmine, and Minh Young Kim, and a little bit later, Damon Baird and the infamous Augustus Cole who is a thrash ball player (pretty much like Football.) Delta Squad, as it turns out , has a pretty big mission on their plate, they need to collect a item called a Sonic Resonator, which will allow COG to map the Locust Hollows beneath what's left of Ephyra, they will need to find a good place to drop a weapon called a Lightmass bomb and wipe the Locust out for good. Along the way to complete the mission Delta squad gets some high-quality killing done, using the Hammer of Dawn they had to take out a Berserker (which is a female version of a Locust but bigger and cannot see very well.) and burning up some Kryll (Pretty much bats that cause a lot of damage and only come out at knight in giant packs.) With a fancy UV light, and the usual chainsaw-based canage. When they reach the designated area where the resonator can do the most good they plant it. But even after they use it to map the tunnels, there isn't a lot of data to make the bomb do maximum damage. Baird finds a device which seems to suggest a map hidden in the East barricade Academy, which means Marcus needs to get a ride home. After fighting through his home to download the data, Marcus and Dom fight their way to the front of a hijacked freight train carrying the Lightmass bomb, which included a Berserker, a few hundred locust and the infamous General RAAM. After killing RAAM and the kryll which they never found out how he could control them. Then they activate the Lightmass bomb, but the bridge that they were heading to was blown up, so Dom gets onto the helicopter while Marcus activates the Bomb which inevitably crashes into the Imulsion below but not before Marucs leaps into the air and catches Dom's hand. The Lightmass bomb blew up several crucial Locust nests. Which score a big one for the good guys. It would almost be cause to celebrate if the last thing you saw wasn't the Locust Queen watching them fly away. 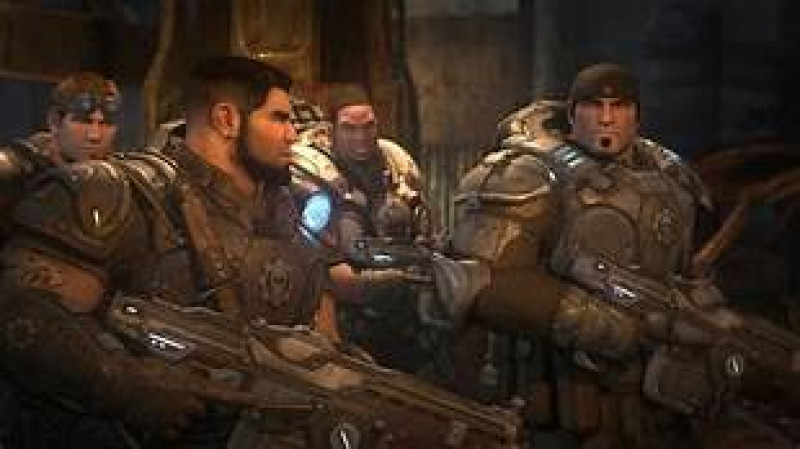 Something about me... I like to play games anytime I can and would like to be a video game designer when I get there. I wrote this piece because I have always been a fan of the Gears of War series and thought what better topic to do then this.