Based on the classic heavyweight by Leo Tolstoy, War & Peace comes to life in a new adaptation by BBC, where the epic’s beloved characters return to the screen. As Napoleon mounts his historic invasion into Russia, five aristocratic families find themselves on the tide of change. Natasha Rostova (Lily James) yearns for love and life, inspired by her brother’s childhood romance, while Andrei Bolkonsky (James Norton) searches for escape and glory on the battlefield, whose friend Pierre Bezukhov, a kind but clumsy bastard made rich overnight, seeks to do some good. They are at a time of discovery in their lives, just as the world is about to change forever. Set against some of the most ruthless European battles of their time, in sickness and in health, they too must fight for war and peace.

First brought to the screen by Audrey Hepburn’s portrayal of Natasha Rostova, BBC’s War & Peace follows the earlier 2007 adaptation, a version featuring Clémence Poésy, Malcolm McDowell, and Brenda Blethwyn. For the 2016 TV miniseries, the first thing that hits you is the rich excellence of everything. From the ominous bass choir that drones in the background, to a symmetrical camera’s eye, we touch the very peak of aristocratic Russia. That glamor is countered by equally breathless Russian winters, blowing snowscapes, gritty battle scenes, and the surreal wonderland of golden-lit balls and social gatherings. The sweeping cinematography of the series pays homage to the novel War and Peace itself.

Characters dance like perfect figurines over this backdrop. The lively, genuine, if naive Natasha is played by Lily James, known by now for the likes of Cinderella, Downton Abbey, and Pride and Prejudice and Zombies. She flows like a ray of sunshine over the story’s shoulders, bringing Natasha to life in the best way possible. And even if the young maiden’s story seems exhausted by now, James rejuvenates that as well, making it more than captivating. Opposite Natasha is the stern, heartbroken Andrei, played by James Norton, known for British dramas like Happy Valley and Belle. Norton transforms one of the so-called Russian Hamlets with stunning, touching vision, and a heartthrob at that. His portrayal of a man older than his years is spellbinding and eventually bittersweet, and like Natasha, utterly authentic. We also have Pierre, the sweet, clueless base-born son who comes to fortune by chance. Endlessly kind and used by those around him, Pierre is played by Paul Dano, known for Swiss Army Man and Little Miss Sunshine for his awkward charm. As the series’s third cornerstone, Dano is exceptional. Your heart will expand to absorb him.

The series works because of these exceptional characters, multidimensional and true, but also because of a meaty supporting cast. Notables include Jim Broadbent as Andrei’s father, and Gillian Anderson as Anna Pavlovna, the socialite queen who facilitates many of the magical balls. As for the younger bracket, the siblings of Natasha and Andrei are played by Jack Lowden and Jessie Buckley, respectively, also struggling to make their own way in life. Although screenwriter Andrew Davies admits to excising some of the characters of the original text, their threads and love stories accumulate into one stupendous production that all resolve in the finale.

But most importantly, it feels magical, and it’s not just the wondrous ballroom scene that, as Lily James puts it, is just like “falling in love.” There’s something deeply euphoric about the series’ eight episodes, and even in its goriest moments, its moments of doubt and rage, the greater story of War & Peace is mesmerizing. It is the sum of its characters, cleverly woven away and back together again, and the balance of climax and horror, amazement, joy, grief, beauty…and love, and death, and war and peace. 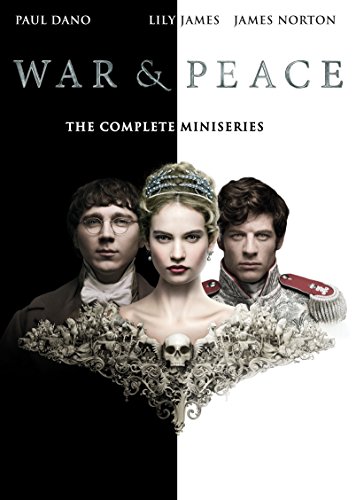