I was at the library wondering what to do. An endless supply of information was at my fingertips. The great invention of the Interenet. I decided to write a fan fiction on my latest anime show, "Inuyasha". As I checked my e-mail I saw Tokyopop sent me something announcing the second season of this show called "Hetalia." This is when I decided to first watch it:

It all seemed like pure coincidence, I've heard of Hetalia before. I never read the manga, though. It was in the 9th grade that I read a summary about it. I remember it said something along the lines:

"Imagine history the way you have never seen it before. Forget the textbooks. Imagine the countries as cute men in a reality show. Hetalia Axis Powers!"

I read Axis powers and immediatley thought, "The Axis Powers consisted of Germany, Italy and Japan. The author of the manga is Japanese so it'll be very biased and glorify the Axis."

I was completley wrong however. In the 10th grade I took AP Euro and found I actually liked history. It was interesting to know how it repeated istelf. My cousin then mentioned it and said, "I am so much like America! I eat junk food and never get fat!"
I simply laughed not understanding.
It wasn't until Ocober 23, 2011 that I regretted ever looking over this amazingly awsome show. (Yes I rememeber the date.)
As I said before, I was bored at the library at Moreno Valley College and found the email at Tokyopop. I then thought, "Well, I like history, so I might as well see what this is about with a critical eye."

I looged on Funimanton and clicked on the firdt episode in english. I sat there staring at the screen as the advertisments continued. The show started and I have to admit, the first couple of seconds hooked me immediatley."

"I thik we should genetically engineer a freindly gaint... Blouba man!"

After those first few lines I was red in the face. As I watched these countries argue I feel like laughing out in the middle of a silent library. If I would have ended there, however, I would have never continued. it was until about 15 seconds later that I was secured to the show.

That line secured me. Not only is Hetalia funny, it has a bit of everything. If you really say, "i hate history," I don't beleive I'd find you say that again after watching this anime.

Yes, I do agree it gets a bit awkward to those non-yaoi (gay) fans since there is a scene (clears throat) but they are kid then. Besides all the confusion (sexuality) I think it make sit funny because it's up to the fans to realize what is really going on. If you are good at history alluding can be easy! This anime is also full of satire and sterotypes!
Something else I don't really understand is the random episodes. There is a scene where the Allies and Axis fight a huge giant Ronam Empire appears in the middle of the sdea, and another time Finland appears in a Santa Claus suit in the sky.
Beisdes that fact, and that some incest is involved, this show is extremley funny! Sure it's rated TV-M, but fans range in age drastically!!
I say, if you don't understand history (especially WW1 and WWII) watch Hetai on your spare time. You will learn alot of history, and get a laugh out of it at the same time! 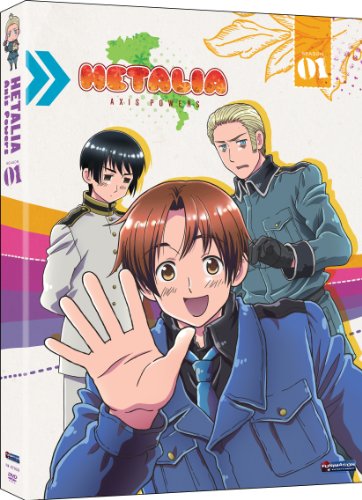 
Buy from Amazon Available on iTunes
The author's comments:
The Hetalia shows! I fyou guysd like the anime just saying, Hetalia: Paint it white comes out IN ENGLISH November 22, 2011!! Can't wait
Post a comment
Submit your own

View profile
I hate to be a critic of such an amazing artical, but you should probably proof read your work before posting. There are a lot of errors.