Scandal: A gritty snapshot of corruption within the Capitol | Teen Ink

Scandal: A gritty snapshot of corruption within the Capitol MAG

Favorite Quote:
"Though my soul may set in darkness, it will rise in perfect light; I have loved the stars too fondly to be fearful of the night." - Sarah Williams

Before the conniving antiheroes of follow-ups "Succession" and "Empire," there was ABC’s political thriller "Scandal," which redefined the parameters for gripping television. Teeming with twists at every corner, showrunner Shonda Rhimes’ anti-"West Wing" drama is chock-full of Machiavellian power brawls, jarringly violent assassinations, and fast-paced plotting. However, beneath the sheer nastiness is a thoughtful, multi-layered portrayal of American politics.

"Scandal" follows D.C. crisis manager Olivia Pope (Kerry Washington) — loosely modeled after the Bush administration crisis manager Judy Smith — as she leads fix-it firm “Pope and Associates.” Alongside her ragtag team of lawyers and hackers, Pope works to handle, spin, and erase anything from a senator’s extramarital affairs to the murder of a reporter. But while working with an unexpected new client, she is soon forced to confront her complicated past with the White House — and the president (Tony Goldwyn).

What propels "Scandal" forward besides its tightly-plotted storytelling is its non-partisan handling of topics such as race, power, and corruption. A key focal point here is politicians, left and right alike, playing dirty to boost poll numbers or approval ratings. Though this may seem overly sardonic, the show finds macabre humor in watching politicians engage in adultery, deceit, and treason (as exhibited by delightfully dreary one-liners such as “We’re shredding constitutional amendments like confetti”). Bursting with black humor and high-stakes drama, the show zips along at a breakneck pace.

As darkly funny and addictive as "Scandal" is, it’s also superbly well-acted. The antiheroine at the helm, Olivia Pope — dressed in sharp petticoats and blouses, and with never a hair out of place — shifts from coolly poised to menacing in the span of a breath. She is aptly captured by Washington, who embodies her with masterful precision. Another standout performer is self-dubbed “political animal” First Lady Mellie Grant (Bellamy Young), who falls somewhere between Jackie Kennedy and Lady Macbeth. There’s a moment where she fakes a miscarriage to earn voter sympathy that is equal parts horrific and morbidly brilliant.

Critics may argue that the show is unrealistic, however that’s the whole point. "Scandal" hyperbolizes the lengths politicians will travel in order to advance their respective careers or causes. The presence of fictional government hitmen-for-hire network B613 and countless coup attempts only bolster the show’s underlying thesis: the current establishment is overrun with greed.

With "Scandal," showrunner Rhimes depicts the White House as “a place that corrupted anybody who came near it.” By blurring the lines between patriotism and blind reverence, the ugliness within the Oval Office is unspooled through black comedy, gripping storytelling, and striking commentary about our world at large. Anyone searching for a captivating series to get hooked on should check out this thrill ride. 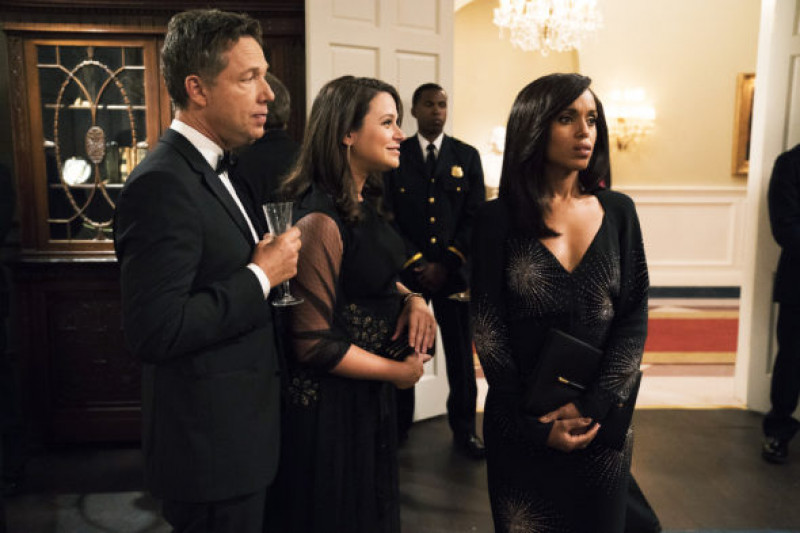 Nadia is an award-winning teen writer and journalist. She has been recognized by organizations such as The New York Times and the Scholastic Art & Writing Awards, and was the winner of the 2019 Write the World Album Review Competition. In her spare time, she enjoys indulging in all things TV, vanilla ice cream, and Young Adult Fantasy novels.