For Damon Albarn, Blur's extended hiatus wasn’t the end of his musical career. In fact, once teamed up with cartoonist Jamie Hewlett and studio wizard Dan the Automator, it proved to only be the beginning of what is most likely the strangest, most ambitious “group” to ever grace the music scene: Gorillaz.

Literally the world’s first virtual band, Gorillaz instantly trailblazed a unique, slightly edgy image for themselves both with their four animated “members”: 2-D, Murdoc Niccals, Noodle, and Russel Hobbs, who were all completely animated by Hewlett; and their self-titled debut, which unbelievably went platinum in several countries and managed to sell seven million copies only six years after it was released in 2001.

Listening to this album now, in this day and age of tasteless, lifeless, and boring pop and hip-hop music, frankly comes as a real shock. Within its entire 53-minute running time, the album manages to include Blur-esque rock (“5/4”), lean punk (the appropriately named “Punk”), surreal trip-hop (the unlikely hit “Tomorrow Comes Today”), sample-looping hip-hop (“19-2000”), and even party music (“Rock The House”). However, the real standout here is the vibrant “Clint Eastwood”, which expertly mixes a mournful Albarn-voiced chorus with light background instrumentations and superb rapping delivered by Del the Funky Homosapien to result in what would deservedly become the album’s biggest hit ever. In short, if you only listen to one song on this album, this is it.

As you might guess from all of that, Gorillaz isn’t exactly the most consistent album on the hip-hop scene. In fact, it could very well confuse or even baffle those who were expecting an hour or so of straightforward rap tunes to bop your head to repeatedly. Indeed, if you’re sick of constantly hearing music on the radio that repeat the same old melodramatic clichés and beats again and again and again, than this is the album for you. However, the strangest part of the entire package is not its weird genre-hopping or experimentations, or even that the odd “Latin Simone” is entirely sung in Spanish. It’s that aside from Hewlett’s animations and Automator’s production, this “band” is really a Damon Albarn solo project. Whether you choose to view that as a mad stroke of genius or a ridiculously ambitious attempt at elevation is up for you to decide.

Despite that, if you’re looking for something fairly enjoyable and teen-friendly (despite the Parental Advisory label, there are actually very few profanities to worry about) to kill some time, you could certainly do worse than hanging out with these Gorillaz. 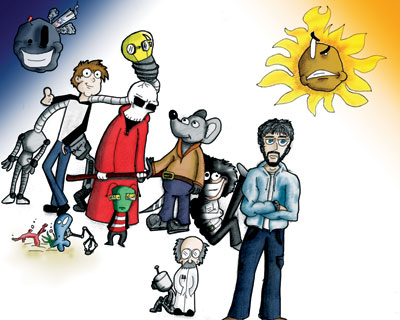