Kid A by Radiohead | Teen Ink

Kid A by Radiohead

I may not know the full details of my life or anything, but one thing’s definitely for sure: I’ve listened to one heck of a lot of music over the years. Pop. Rock. Rap. Hip-hop. Country. Electronica. Jazz. Classical, even. But out of all the albums I’ve listened to (and sometimes had to suffer through), not one of them has yet simultaneously perplexed and intrigued me as much as Radiohead’s fourth album, Kid A.

OK, I won’t lie here: when I first listened to this album, I really didn’t like it. After I had gotten used to (and thoroughly enjoyed) both their earlier guitar-heavy post-grunge sound and their recent exercises in warm electronic rhythms, hearing this band that I had learned to love over the years take their music in a completely different direction really caught me off-guard. I had already been expecting something slightly different than the average Radiohead album (if one much use such terms), but this album took it so far out that I was completely overwhelmed. However, there was something in the album’s unorthodox textures that prompted me to give it a second listen, this time fully equipped with headphones, as I had first listened to it via portable speakers that I got for Christmas. After that, all my first impressions about this album completely fell away from me as my ears eagerly discovered a brand-new sound they simply never been able to achieve before.

First off, the music itself. A complete far cry from other albums by the band, it fuses innovative electronic beats with murky voices and offbeat instrumentations that use just about every instrument in the book (and then some) to create a surreal, trippy atmosphere. In short, it’s like nothing you’ve ever heard before. While that may sound like (and is) something that’s completely off-limits for casual listeners (only the sad acoustic “How To Disappear Completely” vaguely winks at their earlier years), there’s a lot here to reward brave, thinking teens not afraid to plunge headfirst into unknown musical territory: the punchy “Idioteque”, the wistful “Everything In Its Right Place”, the dreamy title track, the (seemingly) desperate “Morning Bell”, the pounding “Optimistic”, the depressing closer “Motion Picture Soundtrack”. Then there’s the lyrics. Cryptic to the point where they make previous Radiohead releases seem about as simple as The Beatles’ shallow debut, they make absolutely no sense about half the time. When they do make sense, however, they range from gloomy (“I’m not here/this isn’t happening”), reflective (“You’re living in a fantasy”), extremely dark (“See you in the next life”) to just plain morbid (“Cut the kids in half”). Again, as all that may imply, this is most definitely not the album for those looking for something lighthearted and cheery to play in the car or to dance to at a friend’s party. However, that alone makes this album a marvel. By so starkly dividing itself from all of today’s boring, lifeless radio-friendly hits, Radiohead has truly created an artistic masterpiece that will be remembered through many years to come. After all, who says being different is a bad thing? 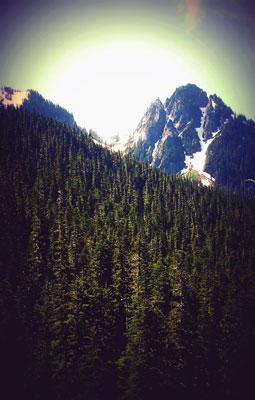