The Death and Birth of Love: Violence in Baz Luhrman's Romeo and Juliet

Violent films such as Baz Lurhman’s Romeo and Juliet encourage violence in modern society through innocent children. Some may argue that violence in films frightens children, teaches them the consequence of killing, and thus prevents them from committing violent crimes in the future. And yet, violence in Romeo and Juliet does not realistically portray the horror, both physical and emotional, of fist fights and shooting, or present strict penalty for inflicting cruelty; instead, it desensitizes the younger generation’s pure hearts.

Hollywood films have become a symbol for thrilling cinematic experiences and advanced special effects. While the audience enjoys the blasting music and rapid camera movements, the terror of violence and death is often lost. In Baz Luhrman’s adaption of Shakespeare’s tragedy, Romeo and Juliet, the brutal conflicts between the Capulets and the Montagues are rendered comical. For example, in the opening fight at the gas station, the entire scene is comedic, somewhat entertaining but definitely not frightening. The audience laughs during the supposedly fearsome and violent dispute. The colourful shirts that the characters wear also contribute to the humorous atmosphere that distorts the audience’s conception of violence. When violence in films is not delivered with the seriousness and horror it deserves, the audience receives the misconception that a punch in the face is endurable and that a gunshot is an exciting way to handle conflicts.
Similar to the euphemized physical violence, the emotional burden that one carries after killing another is not emphasized in most Hollywood films, the intentions and concerns of which being monetary ones. Many soldiers who have killed in combat cannot live with their guilt and become patients with Post-Traumatic Stress Disorder (Kilner). The act of homicide imposes tremendous mental pressure on the perpetrator. This psychological impact is not conveyed through Romeo and Juliet, causing the audience to believe the fallacy that killing is a crime one can easily forget. After Tybalt stabs Mercutio, a temporary dash of astonishment and horror crosses Tybalt’s blood-stained face. However, the shock of ending a life is quickly overcome by the ancient grudge. Tybalt leaves the scene with indifference to the bleeding corpse of a rival who, similar to himself, is an innocent victim laden by prejudiced hatred. The film encourages such apathy after terminating a life; it justifies murder with foolish rivalry.

Rivalry is one of the reasons that people commit deadly crimes. Romeo, in revenge for Mercutio, pulls the trigger on Tybalt. Romeo is then banished, but not executed as Prince last threatens, because Tybalt himself has slain Mercutio. Does revenge justify the act of killing? If so, would not the world be stripped of order? Would not many in modern world be running around with a knife, seeking revenge of many sorts? Revenge does not give Romeo an excuse to kill Tybalt; he should undergo the formerly agreed consequence. His banishment is not only an unjustly alleviated punishment, but also a punishment too light to be a punishment at all. Romeo does not suffer death, dire living conditions, or uncontrollable remorse. Separation from Juliet, which he could have avoided with self-discipline, is his only source of misery. The punishment he receives is not severe enough to prevent the audience from perpetrating violent crime. The film is an example to children that killing an enemy does not result in painful punishment; it encourages violence as a means of solving conflicts and it justifies violence as revenge for a loyal best friend.

Although the violent scenes in Romeo and Juliet contribute to the poignant romance, they are not suited for young children because exposure to violence increases children’s tolerance of it. Children who cannot yet distinguish between cinematic effects and reality grow accustomed and become immune to brutality, their understanding of real-life violence distorted by the comical film effects. Children who are indifferent to violence overlook the subtle beauty it adds to the story, which defeats the original purpose of its existence. These children will more easily turn to violence to end conflicts; they will be able to tolerate the usage of child soldier, and the murder of a neighbour, simply because they do not see the horror of such violent acts. Baz Luhrman’s Romeo and Juliet is therefore an inappropriately violent film that, along with other similar entertainment, eventually derives children, the future of human civilization, of the very characteristic that makes human human, empathy.

Baz Luhrman’s adaption of Romeo and Juliet, if presented to children, encourages violence through the unrealistic portrayal of violence and insignificant penalty. However, the romance of Romeo and Juliet touches the audience’s hearts through the extent the lovers, knowing the consequence of killing, are willing to go to be with each other. To adults who are mentally mature and who understand the real brutality and consequence of hurting others, the comedic violence increases the entertainment level of the film, while the presence of violence itself makes Romeo appear more resolved in his love for Juliet, and the dead boys more loyal in their foundationless and foolish faith. The violence, therefore, not only advances the plot but also adds a deeper layer of emotions to the simplistic beauty of love. The comical violence in Baz Luhrman’s Romeo and Juliet, while having a negative impact on children, is an essential element with which the audience falls ardently in love with the tragic tale of the star-crossed lovers. 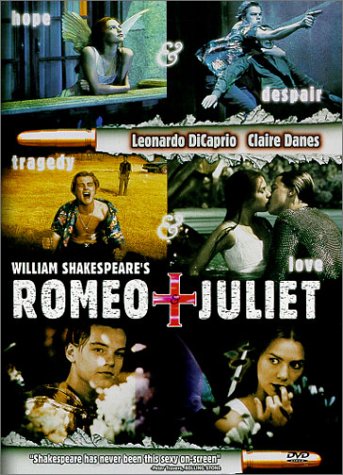