Let me get this straight – I hate horror movies. I nearly threw up the last time I had blood work done. But when my friends invited me to go see “It” with them, I figured that it couldn’t be that bad. And boy, was I wrong.
I spent three-fourths of the movie with my head in my best friend’s lap, clenching my eyes shut and trying to get rid of the image of Pennywise the clown waving a bloody, detached arm through the air. I recited the multiplication tables and the ABC’s to distract myself from the sounds of terrified screams.
But I actually liked the parts of the movie that didn’t include the very essence of the nightmares I’ll have tonight. The characters, though vulgar, were easy to fall in love with; it made watching them throw themselves into life-or-death situations even more alarming. They were three-dimensional characters that faced demons besides the clown creeping around in the sewers and creating bombs to place in Easter eggs. Those types of characters are often missing from horror movies, as detachment makes watching all the head chopping and endless gore and torture a bit easier. But in “It,” there were bullies, a love triangle, abusive fathers, and fights between the characters that reminded the audience, over and over again, that Beverly, Billy, and the others really were just kids.
In a way, the real horror wasn’t in the dolls filled with worms or the strange scene where Pennywise did a dance in the sewer. Instead, it was in the way that the town reacted, and how the children had to deal with the blunt trauma of losing their siblings and their friends while the adults were blind to the hallucinations Pennywise was causing.
It will be a very long time before I watch a horror movie again (translation: never), but I’m happy that “It” was the one I watched. I’m now going to run all the way to California the next time I see a red balloon or – heaven forbid – a clown, but, all in all, “It” was worth the spilled popcorn and nightmares.
This film is rated R. 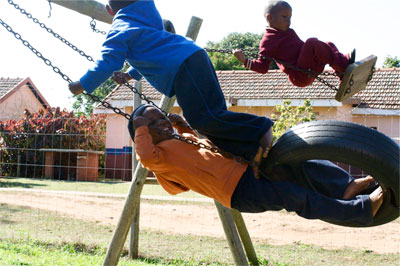 © Children of the Amangwe Village