hOTEL FOR DogS
I am a huge dog lover. I use to love dog-related movies when I was young but as I got older I realized that these movies were no good to real dogs. I began to notice that all those cute little puppies in the movies or the amazing, trick doing, witty stars of the show caused a lot of problems for real animals. Families would watch the dog related movies and then everyone would fall in love with the fluffy antagonist. After the movie, without research, without thinking they went out and bought a dog. The family would love the little dog, for a while at least, but as time goes by they realize their dog cannot do tricks and doesn't act like the dog on the movie.

They realize that the cute puppy they bought has turned into a huge, destructive, chaotic dog. They had no idea what responsibilities the dog came with or the temperament and needs of the breed.

The thing I like most about hotel for dogs is that they endorse helping strays and use rescues for their antagonists. Did you know that all of the dogs in the movie are rescues? I also love that they use dog breeds that aren't as recognizable as other ones so people will actually have to do some research to find the dog they want, and maybe even think to adopt instead.

I love the idea of the movie but besides that there are many other things to bark about in this movie. Like the amazing actors for instance! I had no idea Jake T. Austin was such an amazing actor! He was astonishing! Emma Roberts was perfectly in character! The two of them really act well together, they were closer than me and my own brother are! It was totally believable.
All the actors made me feel like I was really in their predicament; I really connected with all the characters and was totally engulfed by this work of art!

The movie is a comedy but although you may not believe it, this movie is a total drama to! In a good way, and the multiple and unexpected twists make the movie even better. I am not a person to cry in movies, why my mom cried 3 times and she doesn't even like dogs! I have to admit I cried as well.
5 stars! 2 thumbs up!
I CANNOT WAIT FOR THE DVD TO COME OUT! 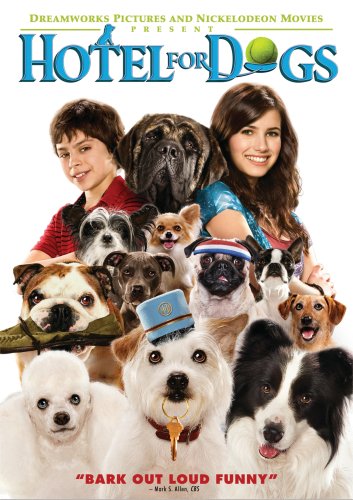 
Buy from Amazon Available on iTunes
The author's comments:
I have my own dog shelter that I opened 2 years ago, and I can really relate to this movie. I am a real critic with animal related movies because I am very conscious of animal cruelty and know that kids are the future of the animals and need to pick a pet the right way and need to have good values along with education in animal related movies. I really recommend this movie. And even though people think it is impossible, I know it is not, since I did it too.
Post a comment
Submit your own