Tous les Matins du Monde (All the Mornings of the World)

Yesterday, in my weekly exploration of the public library, I decided to take a venture into the film section.  I was looking for a specific movie, and was not very surprised to find that it was not there-- but my companion, who had joined me at the library after a lovely morning spent at the beach with her and a few other friends, seemed to be engaged in movie-searching herself; so, as a natural consequence to my being there for more than a few seconds, I ended up picking out three films, none of which I had any prior knowledge of.

Tous les Matins du Monde, which can be translated to English as “All the Mornings of the World,” stuck out to me for several reasons.  I am not quite sure what on the cover caught my eye first- the lush trees surrounding the romantic old countryside house, the two mysterious figures standing in the midst of it all.  I am not sure which of the two men appeals to me more-- the young-looking gentleman, who, though only half of his face is visible, I imagine to be very handsome-- or the older, more mature individual, looking toward the sky with his arms lifted in the same direction, as if to announce his grand and sorrowful speculations to the world.

The lovely French writing of the title also appeals to me significantly, especially when the words are pronounced by my companion, who is well-spoken in French, so perfectly, so beautifully.  The short description of what the film is about is what completes my decision: “Based on the lives of 17th century composer Saint Columbe and his protege Marin Marais, this cinematic masterpiece also features a best-selling classical soundtrack performed and conducted by Jordi Savall.”  There is nothing I love more than classical music, except perhaps for classical music in the context of a well-made, historically-themed biographical film.

In this afternoon’s viewing of the film, I was not disappointed.  Alan Corneau’s 115-minute long film was at once beautiful and informative, elegant and abrasive in its dark themes of death and dissatisfaction, tragic and intensely romantic.  The music is wonderful, and richness of meaning is added to beautiful composition when you become aware of what each piece meant to its composer.  The film seeks to answer: “What is music?  What is its purpose?  What makes it so significant to us as human beings?”  And, though the answers it provides are largely situational and subjective (I am one to think that music means many different things to many different individuals), they certainly have an emotional truth in regards to Saint Columbe’s personal experiences, and the film’s pondering of different interpretations of music is done marvelously.

The setting of the film is very beautiful-- whether in regards to the elegant yet simple dresses of Saint Columbe’s two lovely daughters, Madeleine and Toinette, the enchanting landscape, or the indulgent robes of the court musicians, my eyes were never underwhelmed for a moment.  The romance of the film is captivating, heartbreaking, agonizing.  What was the defining factor of this film to me, however, was the character of Saint Columbe, played by Jean-Pierre Marielle.  The passion, the madness this character captures is fantastic.  There are two moments in particular that I absolutely adore-- the first is near the beginning of the film, when Toinette asks her father why her mother is not there, and Saint Columbe replies quickly and with some difficulty that he cannot talk as his wife did, he does not enjoy conversation or books, but he loves them and that is enough, then swiftly shuts the door and returns to his own business.

Something about the way the actor delivers those hurried lines is so genuine.  The other is when he explains to Marin Marais that the strokes of Baugin’s brush are a parallel to the music he (Saint Columbe) makes.  Overall, this is a very excellent, romantic film accompanied throughout by enchanting baroque compositions. 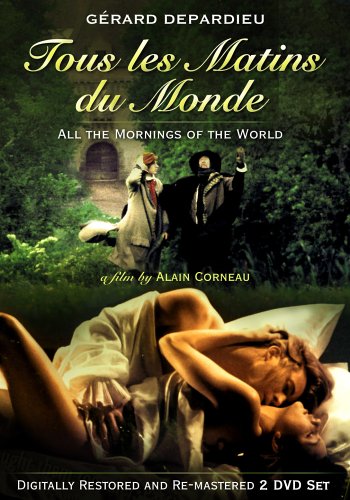 I adore a romantic story, and would like to help anyone with similar sensibilities to mine to find something that can take them on a romantic adventure perhaps not possible in our everyday lives.  I also would like to introduce others my age to the beautiful music of Saint Columbe and Marin Marais.