The Imitation Game, starring Benedict Cumberbatch, is an excellent movie about the math professor Alan Turing who cracked the German Enigma. With his group, he created a machine to crack all codes that the Enigma could spit. It is estimated that he saved 14 million lives, and no one knew till fifty years later, when the British government released the information it had been hiding from the Germans and the rest of the world. This unrecognized hero commited suicide a few years after the war because of the drugs he took to "fix" his hormones and change him from being a homosexual.

This movie combines the genius of Cumberbatch, a true, sad story, and thought-provoking ideas to make a work of art. The deep feelings, grave importance, and tragic truth of the story really hit home as you watch this.

One of the things I really want to adress is the homosexual aspect of the movie. At first, I didn't even realize that Alan Turing was a homosexual. Upon hearing this, I was shocked, but that didn't compare to the horror I felt when I saw how he was treated after the war. He was arrested because of his homosexuality and given the choice of taking drugs to "fix" himself or spending two years in prison. The sad thing is, the government tried to change the man that had saved 14 million lives because they thought he was "damaged" simply for being different.

To the Enigma and code-cracking, now. In WWII, the Germans created the Enigma, a machine that spat out codes that were supposedly unbreakable. One man would prepare the settings on his machine, then type in the code. The Germans would know the settings being used and, when they received the code, they would set the Enigma onto the appropriate settings and type in the jibberish they received. Cracking these codes seemed impossible, as the Germans jealously guarded the secrets of these machines, and even the machines themselves. To keep their code from being broken, they changed the settings at midnight every night. Twenty four hours exactly to conquer an unbeatable machine with 159,000,000,000,000,000,000 different settings.

However, Alan Turing made his own machine. Theoretically, it would break the codes of the Enigma in some way that I will never understand, being someone who is oriented towards writing, not math. His machine, Christopher, failed at first. Then, Turing and his team found the solution. The Germans sent a message every morning at six thirty. By telling Christopher what the letters in the date and time meant, he could unravel the settings for that day and break the code.

There was a catch, though. If the British army suddenly started perfectly countering the attacks of the Germans, the latter would realize their code had been cracked and they'd change the design for the Enigma in a heartbeat. Basically, Turing and his team had to decide who lived and who died.

This movie is not one that you can just watch and then go home without a second thought. It forces you to think about homosexuality and choices of life and death. I highly suggest that you watch it. 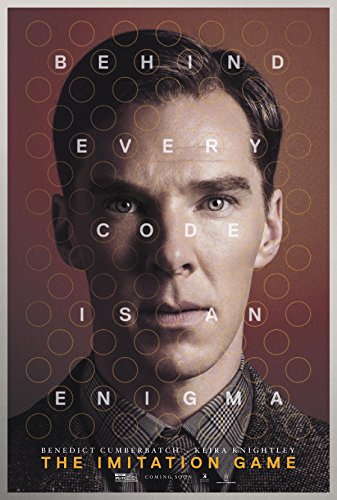