What movie comes to mind when you think of compelling, memorable characters, spectacular visual effects, a fantastic score, and a beautiful, tragic plot? What movie has captured the hearts and imagination of people of all ages around the world? What movie has retained its charm and ­appeal for over a decade, and has earned a rightful place in cinematic history?

The answer is “Titanic,” the 1997 film that opened with low expectations and then astounded the public with its massive success. As the highest-grossing film of all time (until director James Cameron's “Avatar”) and winner of 11 Academy Awards, including Best Picture and Best Director, “Titanic” raises hopes for moviegoers and does not disappoint.

First, consider an undertaking so daunting that many would deem it impossible: recreating the RMS Titanic and its fateful sinking. This task undoubtedly required much time, skill, and effort, not to mention a huge budget – at the time, “Titanic” was the most expensive film ever made. The ship's splendor shines throughout the movie and adds an atmosphere of magic that film sets rarely manage.

Another element of the film's success is the superb, talented cast. Most notably, Leonardo DiCaprio and Kate Winslet give commanding performances as Jack and Rose, the young star-crossed lovers separated by ­social class on the maiden voyage of the doomed vessel. They are cast perfectly; a better choice could not have been made. Along with the rest of the cast, including Billy Zane as Rose's wicked fiancé and Gloria Stuart as Rose at age 101, they allow the audience to join their journey and share in their emotions and experiences. By the conclusion, viewers feel very close to the characters and truly care about them, which is why the movie is so poignant and tragic.

So many years after its theatrical release, “Titanic” still has not lost what made it such a success. This moving, simply beautiful story about fate, disaster, and the power of love has proven to be a timeless classic and an epic masterpiece. 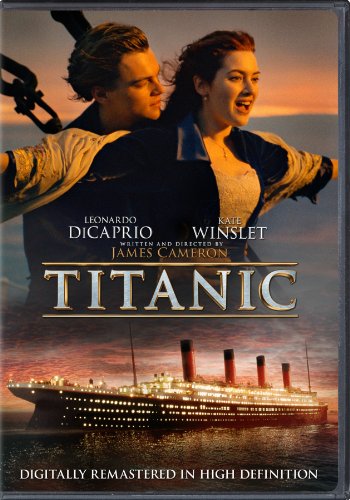 
Buy from Amazon
The author's comments:
I write this to celebrate the approaching eleventh anniversary of Titanic’s theatrical release. The film first opened in theaters on December 19, 1997.
Post a comment
Submit your own

Chunks jowin said...
on Jan. 22 2018 at 5:21 am
Nice page luved these reviews superb
Vicky_Vanity said...
on May. 13 2014 at 6:28 pm
I love titanic i think this review covered the sentimental part all the way to the exciting suspenseful parts i love the work Kate and Di Caprio did five stars to the review and movie
Jay Lo said...
on Apr. 27 2012 at 10:56 am
Awesome review! I think Titanic is one of the greatest movies made which I continue to enjoy. I’ve watched this movie dozens of times using my iPad, using my Sling adapter to my Hopper DVR. This offers portable TV, and I can watch movies on my time. The Hopper lets the family watch any recording from any room, which eliminates the debate on what to watch. I never had this flexibility and I always missed shows. Now I can watch when I want and I’ve been able to get more entertainment that in the past few years. This was a great suggestion from my coworker from DISH.
DACOOLPERSONLOL said...
on May. 16 2011 at 8:30 am
SAD.SAD.SAD.SAD.SAD
WritingLoverForever PLATINUM said...
on May. 24 2010 at 3:44 pm
WritingLoverForever PLATINUM, Bowling Green, Ohio
32 articles 2 photos 198 comments

View profile
This movie was amazing! I never get tired of watching it and the final death scene makes me cry every time. I loved Leo and Kate together in the movie; they had such chemistry, am I right? Thanks for doing a review of this. I was actually hoping somebody would someday. :)
N.Sweet GOLD said...
on May. 5 2010 at 7:52 am
N.Sweet GOLD, Roslyn Heights, New York
10 articles 0 photos 15 comments

Favorite Quote:
"I figure life's a gift and I don't intend on wasting it. You don't know what hand you're gonna get dealt next. You learn to take life as it comes to you, to make each day count." -- Jack Dawson, Titanic

View profile
I love this movie so much. Leo and Kate <3 the whole story and romance...everything. It is really wonderful! (as is this review)
N.Sweet GOLD said...
on May. 5 2010 at 7:51 am
N.Sweet GOLD, Roslyn Heights, New York
10 articles 0 photos 15 comments

Favorite Quote:
"I figure life's a gift and I don't intend on wasting it. You don't know what hand you're gonna get dealt next. You learn to take life as it comes to you, to make each day count." -- Jack Dawson, Titanic

View profile
I am extremely obsessed, knowing every single line of the movie and constantly watching it.
dule05 BRONZE said...
on Apr. 30 2010 at 5:28 pm
dule05 BRONZE, Kraljevo, Other
1 article 1 photo 102 comments

Favorite Quote:
"In the end, the only people who fail are those who do not try." ~David Viscott

View profile
Congrats on getting published! I just got one of my reviews published as well :D Anyways, great article :) Titanic  is and will always be my favourite movie , not to mention Kate who is my fav actress and Leonardo is good as well. Titanic will always continue to be represented as one of the best movies of all times.
RipponLeaEnergise BRONZE said...
on Apr. 28 2010 at 9:58 pm
RipponLeaEnergise BRONZE, Clayton, Other
1 article 4 photos 76 comments

Favorite Quote:
"how wonderful it is that nobody has to wait a single moment before starting to improve the world"

View profile
im a bit obsessed. ive seen the movie 146 times over 6 years. i get what ur saying, how the movie just makes you feel like your in the moment or situation and you can feel the passengers emotions. really good review.
karen_xo PLATINUM said...
on Apr. 27 2010 at 3:38 pm
karen_xo PLATINUM, West Chester, Pennsylvania
48 articles 7 photos 29 comments

View profile
Okay so...this is the first film review I ever submitted to Teen Ink (although it's just getting published now). My style has changed so much! As in, it has gotten better :D