“Admission” is Tina Fey's newest project. This sweet comedy is unlike the rest of her work. From ­delivering the Weekly News and appearing as a Sarah Palin on “Saturday Night Live,” to being the workaholic Liz Lemon on “30 Rock,” and performing as the witty teacher in the hit movie “Mean Girls,” she has been a one-woman comedy inspiration. But this new movie is surprisingly ­serious.

The story follows Fey's character, Portia Nathan, a Princeton admission's officer. She receives a call from John Pressman (Paul Rudd) to speak to the senior class of the back-woods high school where he teaches. She hesitantly agrees, but to her surprise, John's hidden agenda includes introducing Portia to her possible son, Jeremiah (Nat Wolff). She then must decide to ignore the bomb that John has dropped onto her organized Princeton desk or risk everything she has to let her alleged son into her college and her heart.

Paul Rudd is a dream as Pressman, the free-spirited teacher. On his quest to reunite Portia and the son she had given up for adoption 17 years earlier, he discovers his constant interferences in others' lives is sometimes unwanted. His personal growth is striking, though his arrogance keeps us siding with Portia. Rudd's knack for romantic films is ­unmatched while Fey had to transfer from the land of ­comedy.

Though Fey has her comfortable character of the working, single, OCD-type Wonder Woman, her shift to a more concrete movie was uneasy. She adds humor and comic relief, but lacks convincing love toward Pressman. Her character is certainly made for Fey, with the sweet motherly instinct, the decisiveness, and the awkwardly flirtatious appeal, but the movie does not exceed her standards regarding comedy. 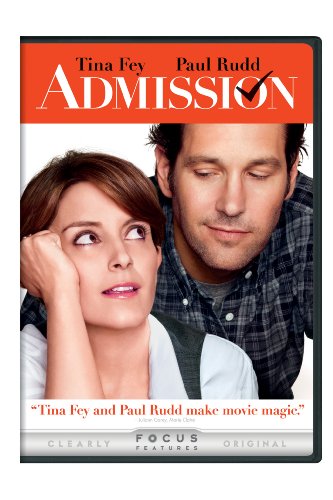 
Buy from Amazon
The author's comments:
I loved the new movie "Admission." Tina Fey has always been my hero and I was glad to see her branch out and do a more serious movie (no matter how much I adore her comedy.)
Post a comment
Submit your own