I Saw the Devil | Teen Ink

I Saw the Devil

In the world of foreign films, there have been a select few over the past twenty years that have become instant classics, respecting their genres to the fullest extent. One of these films is the 2010 South Korean film, I Saw the Devil. Directed by Kim Ji-Woon, I Saw the Devil tells the story of a man who loses the one thing closest to him, and then seeks out revenge, no matter the cost.

This film is one of the greatest foreign films i've ever seen, and one of the best thrillers of all time, echoing the grisly crime and violence of Se7en, and the brutal revenge tale of Edge of Darkness. The actors were fantastic; Lee Byung-hun and Choi Min-sik were amazing as the main characters, both the polar opposites of good and evil, but in the end, seem to find common ground, which is terrifying and emotional. The script-writing by Park Hoon-jung was top-notch, adding in a couple goofy scenes with a friend of the antagonist's story, but still completely having us on the edge of our seat and trembling as the violent and graphic struggle continues. Even the music, written and composed by Mowg, was phenomenal, adding in the heart-felt emotion and white-knuckle intensity.

Overall, I Saw the Devil is a phenomenal film, an instant classic, and a must-see for anyone who truly appreciates cinema. Although, it's not for everyone, as the violence does not hold back. From the first scene to the end shot, you will see how the main character "Saw the Devil." 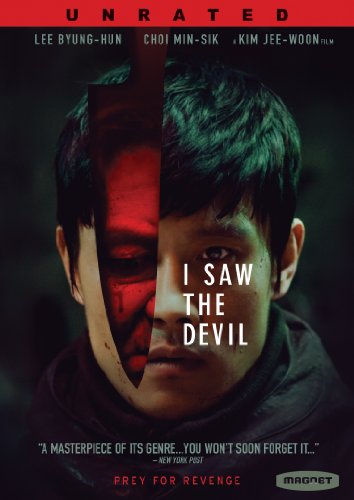 
Buy from Amazon Available on iTunes
The author's comments:
A Foreign Thriller that is an Instant Classic
Post a comment
Submit your own