2007 was the year marked in movie culture by the big budget thrillers…The Bourne Ultimatum, 300, I Am Legend. With all of the explicit, commercial films bullying the box office, one would think that the classic “feel good” movie was on the brink of extinction. Fortunately, there is still hope for the heartfelt, meaningful film, and The Great Debaters deserves a standing ovation for breathing life into the genre.

In his latest cinematic endeavor, The Great Debaters, Denzel Washington has produced one of his best works yet, adding to one of the most decorated resumes in motion picture history. As if starring in another breathtaking lead role was not enough, Washington also served as director for the picture for the first time since leading the award winning film Antwone Fisher in 2002. Piecing together a modest storyline, a low budget and a genuinely talented cast, he succeeded in creating a sincerely quality film that will leave movie-goers with goose-bumps and warmed hearts.

The Great Debaters follows the true story of Melvin B. Tolson (Washington), the fiery debate team coach of the all-black Wiley College in Texas who inspired his students to “Find, take back and keep their righteous mind.” Amid the volatile social struggle between southern whites and blacks in the 1930s, Tolson’s debate team personifies the idea that defeat only makes one stronger, ascending the national debate team ranks and becoming the first team from a black college to challenge a white college.

The Great Debaters is highlighted by a distinguished cast of accomplished actors. In addition to his own, Washington employs the impeccable talents of Oscar Award Winner Forest Whitaker, who stars as a renowned black scholar and father of one of the debaters. Additionally, the cunning Nate Parker and the lovely Jurnee Smollett exhibit their bright acting abilities and promising futures as they play the roles of the principle members of the debate team. TV favorite John Heard also makes an appearance as the underhanded sheriff of Wiley county. Simply put, this film’s flawless acting is truly its most impressive trait and merits it a Golden Globe nomination for Best Motion Picture.

Washington’s superior directing joins the movie’s acting in producing a film to be remembered. I could not help but be pleasantly reminded of Coach Boone, Washington’s role in the award-winning Remember the Titans, as Professor Tolson fiercely orchestrates his debate team to approach the “sport” as if it was “combat.” In accordance with this ideal, The Great Debaters did a remarkable job of glorifying the gritty, heated battlefield of college debate to the likeness of a dramatic football game. Additonally, the film approaches the tender topic of racial equality with expert precision. Of all the tired movies that attempt to coerce the viewer into sympathy with the bitter pain of the early 20th century black man, this film comes the closest to succeeding.

While The Great Debaters gets the nod in the acting and directing departments, it is not without its drawbacks. The movie seemed to try a bit too hard to appeal to the viewer’s emotions at times, over-dramatizing a handful of important scenes beyond the point of believability. Similarly, a completely unnecessary sex scene that had no effect on the plot was included in what seemed to be an effort to satisfy modern culture’s immoral expectations of the media. While I’m sure the producers will appreciate the monetary reward of the mainstream appeal, the integrity of the film’s message was somewhat diminished.

Regardless of the film’s few minor setbacks, however, The Great Debaters is a motion picture that can be thoroughly enjoyed by viewers of all ages and backgrounds. This humble film won’t break box-office records, but it succeeds in restoring hope to those who admire the conscientious, “lesson-learned” movie. Hats off to Denzel Washington for another spectacular theatrical accomplishment. 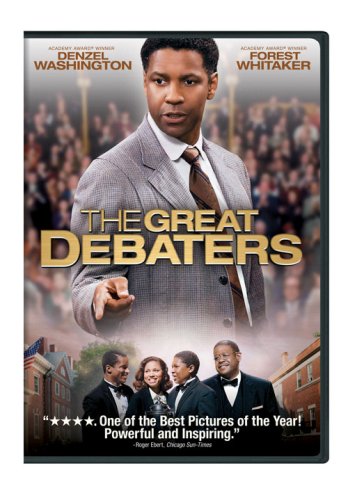